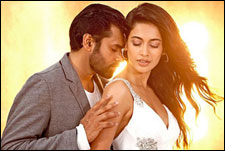 Deepa Garimella / fullhyd.com
EDITOR RATING
7.0
Performances
Script
Music/Soundtrack
Visuals
7.0
6.5
7.5
9.0
Suggestions
Can watch again
Yes
Good for kids
No
Good for dates
Yes
Wait to rent it
No
Template movies are usually stuck with functioning as picture frames for the stars they revolve around. The frames may be embellished as gaudily as is considered legal, but there's no denying the fact that it is the star who shines through. But sometimes, it so happens that the picture and the frame share a common soul, and Panjaa is just such a film.

Meanwhile, Pawan Kalyan is a star whose brand and persona - whether carefully-constructed or otherwise - have now come to mean a curious combination of fame and reticence, and this is the enigma that Panjaa seems to have worked in tandem with.

Panjaa is set in Kolkata, and is about the clash of egos between a don called Bhagawan (Jackie Shroff) and his otherwise-loyal protege Jai (Pawan Kalyan). Jai is actually incredibly loyal to Bhagawan, but Bhagawan's son Munna is a brute, and Bhagawan willingly turns a blind eye to his atrocities. When Munna's behaviour gets increasingly barbaric, things turn sour - very sour. Meanwhile, Bhagawan's losses are blessings for his rival Kulkarni (a brilliant Atul Kulkarni).

Like we said, this is an unmistakably template-driven movie. However, this is also a clean-cut, uncluttered film, very clear about the fact that it is a study of power struggles. The narrative is suitably thrilling, despite the absolute predictability of the script. The movie is also not crippled by diversions - aside of Brahamanandam's Papa Rayudu track and Jai's romance with his "gardener" Sandhya (Sarah Jane Dias, who seems to have a bit of Ileana in her).

And we're not complaining about the old-wine-in-a-new-bottle approach anyway, since the bottle looks just so darned good. Indeed, the movie is shot in top-notch visual quality - the frames are fuller, the angles are edgy, the close-ups are flattering, and there's a good sense of style all around (the jeans-clad gangsters are clean-shaven and drive BMWs).

As for Pawan Kalyan, the close-cropped beard and the understated presence make for a great re-invention of his image, and it works. The role doesn't require any skills specific to him - in fact, any of our senior leading actors could have fit into it - and he has only had to breeze his way through it. His fixation with monologues still seems to exist, but there's no space for him to be all animated and boyish, since Jai is largely a silent man given to much regret "the 20 years that he has lost".

Pawan Kalyan has also always shared very good on-screen chemistry with his ladies, and it helps that Sarah Jane Dias displays good looks, charm and exuberance in equal measure. Aside of the fact that she doesn't look like the "village girl" that she is portrayed as in the second half, she has a good future in Telugu films. Anjali Lavania is all about skin show, and as is usual with our movies, the dubbing for both the ladies is pretty bad.

Jackie Shroff is excellent, as is the actor playing Munna. Parachuri and Tanikella play Bhagawan's henchmen. Kulkarni, like we said, is good.

Yuvan Shankar Raja composes a memorable set of tunes, and his music is one of the film's strengths. We'd have loved a few more romantic numbers, though.

On the whole, Panjaa is worth a watch, but highly unsuitable for kids and family audiences.
Share. Save. Connect.
Tweet
PANJA SNAPSHOT

As a policy, we do not remove any user comments from the site, unless they are reported by other users as offensive or derogatory to a particular community.

Cheers
The fullhyd.com Team
saradhi on 21st Dec 2011, 4:17pm | Permalink
Hello, Editors of the site! Do you want to keep only positive comments in the website? Then what is the fun in user reviews? Nonsense.
Pradeep on 16th Dec 2011, 6:01pm | Permalink
Amazing piece of work by entire cast and crew...may not be palatable to an average movie goer. Panjaa is strictly for the off beat watchers and critics.


Pros: screenplay, performances, background music, cinematography , action sequences
Cons:
RATING
8
vithalbtech on 16th Dec 2011, 1:36pm | Permalink
Stylish..and very cool..Though few sences are dull Pawan rocks.. Songs are very well picturaised and fights though stylish could have been bit naturalistic.. Title track could have been brought front..
jnprakash on 10th Dec 2011, 9:35pm | Permalink
It's an old story, but interesting narration. I liked it. It just haunts you after getting home. It is not a heroic movie like Magadheera, but definitely engrossing and worth a watch. Simply put it is a simple, nice and a neat movie


Pros: Narration, adivi sesh
Cons: slow pace
RATING
7
anon_critic on 10th Dec 2011, 8:45pm | Permalink
Surprising to see so many positive reviews for this movie. There is nothing other than a stylized Pawan Kalyan in this moive. At best, this is like a lousy remake of a tamil movie - with no basic understanding of telugu nativity. Very poorly executed movie, marginally better than Puli and a poor re-hash of some of his old movies

ADVERTISEMENT
This page was tagged for
PANJAA MOVIE REVIEW
Panja telugu movie
Panja reviews
release date
Pawan Kalyan, Sarah Jane Dias
Follow @fullhyderabad
Follow fullhyd.com on
About Hyderabad
The Hyderabad Community
Improve fullhyd.com
More
Our Other Local Guides
Our other sites
© Copyright 1999-2009 LRR Technologies (Hyderabad), Pvt Ltd. All rights reserved. fullhyd, fullhyderabad, Welcome To The Neighbourhood are trademarks of LRR Technologies (Hyderabad) Pvt Ltd. The textual, graphic, audio and audiovisual material in this site is protected by copyright law. You may not copy, distribute, or use this material except as necessary for your personal, non-commercial use. Any trademarks are the properties of their respective owners. More on Hyderabad, India. Jobs in Hyderabad.