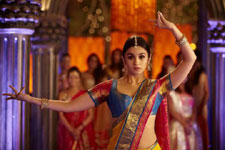 Ravi Kandala / fullhyd.com
EDITOR RATING
7.0
Performances
Script
Music/Soundtrack
Visuals
8.0
5.0
6.0
7.0
Suggestions
Can watch again
Yes
Good for kids
No
Good for dates
Yes
Wait to rent it
No
With Hindi cinema moving more and more to urban love stories of the multiplex variety, the older generation of actors are sure getting great opportunities. Take 2 States for example. The film has two very well-penned roles for Revathi and Amrita Singh. The two veterans, who in their heydays must have played the typical running-around-the-trees roles in many of their movies, sink their teeth into their characters, and the fact that they are enjoying their characters shows in their performances.

The entire movie is absolutely worth just the one moment when Revathi gets to sing her hit number Saathiya, yeh tu ne kyaa kiya in one of the scenes. It is such a joy to see the saree-clad Revathi now and recall the baggie T-shirt- and skirt-clad Revathi who pranced around to this song in the movie Love in 1991.

But we've gushed enough - let's get to 2 States.

If you've read the book, you pretty much know how 2 States is going to play out, so allow us to warn you upfront. If you are easily upset by regional stereotypes or think that the whole Punjabi-Madrasi thing is overdone in the book, please stay away. If you do not heed to our warning, you might just walk out of the theatre and head for the nearest available lawyer to file a suit against the director-producer.

2 States tells the story of Krish Malhotra (Arjun Kapoor), a Punjabi munda, and Ananya Swaminathan (Alia Bhatt), a Tamil ponnu. The duo meet in IIMA and quickly begin a very physical relationship with each other that lasts through their 2 years of college.

Krish's and Ananya's parents (Ronit Roy, Amrita Singh; and Shiv Subramaniyam, Revathi) meet each other during the couple's convocation and hate each other on first sight. After this disastrous first meeting, Krish travels to Chennai and makes Ananya's parents fall in love with him, and Ananya travels to Delhi and does the same with Krish's mom. However, when the parents come face to face again, all hell breaks loose, a break-up happens, and Krish finds himself on a psychiatrist's couch asking for advise on the best way to commit suicide. How the great divide between North and South is bridged for the couple to unite forms the plot of 2 States.

Abhishek Varman, the director of the movie, portrays the stereotypes expected from both the states, but also takes care not to go overboard. The film also showcases the relationships between the kids and their parents very well. The insecurities, the hesitation, the hurt that their kids think they can choose their own life partners, the attempts at coming around, and finally the acceptance when they realise that the chosen one can keep their kids happy - all these are shown wonderfully well.

Yes, the path to convincing both families appears a bit too easy, but with scenes like the one where Krish proposes to Ananya's entire family thrown in, you hardly have reason to complain. The one thing that we think could've been done better is the initial love story that is more physical than anything else.

Arjun Kapoor and Alia Bhatt do a wonderful job of portraying the couple torn between their parents and their love story. Bhatt looks positively radiant in her Tamilian avatar and is surely fairer than 99% of the true Tamilians (this is us exercising stereotypes, excuse us!). The parents, like we've mentioned three thousand times so far, are very convincingly portrayed, and add plenty of weight to the movie.

The music for the songs is flashy but the operatic background score is very well utilized throughout the movie. The film is just a tad long - trimming around 10 minutes would have made it outstanding, but we're hardly complaining. The production and technical values are all fine.

If you've just finished your exams and are heading out for that long-awaited date, 2 States is just the movie for you. The way life in and after the IIMs is portrayed in the movie might just inspire you to begin preparing for CAT pretty soon!
Share. Save. Connect.
Tweet
2 STATES SNAPSHOT 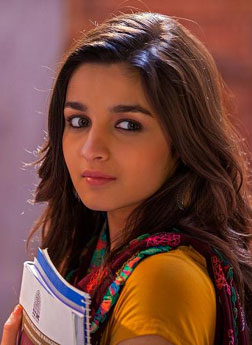 See 2 States full details
TOP COMMENT
sumanth232 on 19th Apr 2014, 4:13pm | Permalink
Movie is crap... Ravi Kandala might have mistaken Kai po che for 2 states
6
0
2 STATES USER REVIEWS
1 - 3 OF 3 COMMENTS
POSITIVE  |  NEGATIVE |  NEWEST  |  OLDEST  |  MOST HELPFUL  |  LEAST HELPFUL
USER RATING
3.0
1 USER
Performances
Script
Music/Soundtrack
Visuals
NA
NA
NA
NA
Can watch again - NA
Good for kids - NA
Good for dates - NA
Wait to rent it - NA
sumanth232 on 19th Apr 2014, 4:10pm | Permalink
seriously Ravi Kandala....? I am stunned !!! 7 rating for this crap movie.. The movie is very boring, tests one's patience. You can give at max 4 , if you want to be too generous
RATING
3
Pelican on 18th Apr 2014, 10:29pm | Permalink
Don't bash the reviewer when you haven't watched the movie yet.
And who are you to say reviewers cannot be enamored by star kids or yester actors? I for one love kandala's reviews. Can't wait to watch it :)
sumanth232 on 19th Apr 2014, 4:11pm | Permalink
Wait to watch it on tv..otherwiswe you will curse yourself for wasting 150 bucks for this boring movie
BonguBoshanam on 19th Apr 2014, 6:50am | Permalink
WHOA WHOA WHOA! Who said I haven't watched the movie? Stop lecturing dude. Get a life. You seem to be a blind fan of film stars & reviewers. Sometimes, it pays to use your own brain.
BonguBoshanam on 18th Apr 2014, 8:50pm | Permalink
7? for this movie? Kandala babu, I think you got overwhelmed by the stars (rather star children) in this movie. You were awed by their looks, their clothes, the location (IIM-A), the yesteryear actresses (wet dreams?) & overlooked critical aspects of film-making. I wonder how this movie was rated by you as 7? Did you sell yourself out? What happened to you? You are much better than this. Look into yourself & see how you have changed. Pathetic. Anyways, my formula for watching a movie - If reviewers rate the movie >= 7 then take two points off & drop the movie. If reviewers rate as
Portuguese Man-of-War on 19th Apr 2014, 8:47am | Permalink
If they bought Ravi Kandala, then they must have bought every reviewer of other big sites in the country, too, since the film has similar (or even higher) ratings in most places. By the way, you haven't said just why you hated the movie so much.
sumanth232 on 19th Apr 2014, 4:13pm | Permalink
Movie is crap... Ravi Kandala might have mistaken Kai po che for 2 states
WhateverDude on 19th Apr 2014, 9:29am | Permalink
Bcoz it is absolute garbage made out of a book that is still worse. BTW, not every site has rated this movie as Mr. Kandala did. Check out some credible sites. Hard to do? Search on google for the reviews.
LEAVE A COMMENT
fullhyd.com has 700,000+ monthly visits. Tell Hyderabad what you feel about 2 States!
MORE MOVIES
Latest Reviews
SR Kalyana Mandapam
Ippudu Kaaka Inkeppudu
Thimmarusu
Kadhanika
Shukra
more
Deyyam - 2021
Tempt Raja
Vakeel Saab
Wild Dog
Sulthan (Telugu)
Sulthan
Rang De (Telugu)
Saina
Aranya
Chaavu Kaburu Challaga
Contemporary Reviews
Pratighatana
Transcendence
Rio 2
Prabhanjanam
Dekh Tamasha Dekh
more
Galata
Prathinidhi
Laddu Babu
Avatharam
Divergent
Rio 2 (3D)
Bhoothnath Returns
Race Gurram
Captain America: The Winter ...
Random Reviews
Savior
Yeh Mohabbat Hai
Saaya
Ayodhya
Adirindayya Chandram
more
Jaan-E-Mann
Die Hard - 4
Barah Aana
Iron Man 2 (Hindi)
180
Oka Romantic Crime Katha
Fast & Furious 7 (Telugu)
Eedu Gold Ehe
Nirdosh
Ready Or Not
SEARCH MOVIES
Dissatisfied with the results? Report a problem or error, or add a listing.
ADVERTISEMENT
SHOUTBOX!
{{todo.name}}
{{todo.date}}
[
ip{{todo.ip}}
]
{{ todo.summary }}... expand »
{{ todo.text }} « collapse
First  |  Prev  |   1   2  3  {{current_page-1}}  {{current_page}}  {{current_page+1}}  {{last_page-2}}  {{last_page-1}}  {{last_page}}   |  Next  |  Last
{{todos[0].name}}

ADVERTISEMENT
This page was tagged for
the 2 states in hindi
2 states 5 hindi
2 states full movie
2 states full movie review with headings
2 States hindi movie
Follow @fullhyderabad
Follow fullhyd.com on
About Hyderabad
The Hyderabad Community
Improve fullhyd.com
More
Our Other Local Guides
Our other sites
© Copyright 1999-2009 LRR Technologies (Hyderabad), Pvt Ltd. All rights reserved. fullhyd, fullhyderabad, Welcome To The Neighbourhood are trademarks of LRR Technologies (Hyderabad) Pvt Ltd. The textual, graphic, audio and audiovisual material in this site is protected by copyright law. You may not copy, distribute, or use this material except as necessary for your personal, non-commercial use. Any trademarks are the properties of their respective owners. More on Hyderabad, India. Jobs in Hyderabad.