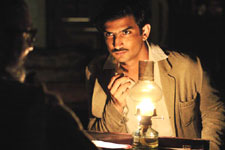 Set in Calcutta in 1942, the film introduces young audiences to the classic Bengali pulp fiction character, and also reintroduces him to those viewers who read the books and watched the TV series. The adventure begins when Byomkesh Bakshi (Sushant Singh Rajput) is approached for help by Ajit Banerjee (Anand Tiwari), whose father has gone missing. What initially seems like a straightforward missing person case slowly turns into a murder mystery, a political intrigue, a drug smuggling case and ultimately an international conspiracy.

Banerjee expertly reveals layer after layer to the enthralled audience, and adds to the enjoyment of the story by staffing it with a range of quirky and interesting characters. There's Dr. Anukul Guha (Neeraj Kabi) and his band of bachelors in a crumbling guesthouse, shadowed by a tremulous, Gollum-like house help. Angoori Devi (Swastika Mukherjee) is less actress, more seductress, while Satyawati (Divya Menon) is a beautiful, young political activist. And there are heroin addicts, crazed Chinese mafia dons, a katana-wielding Japanese dentist and a rather inept British police commissioner.

Bakshi is young, brash and reckless, and consequently makes mistakes, gets duped, and sulks when embarrassed, but ultimately has the smarts to foil the well-laid plans of a megalomaniacal arch villain. Sushant Singh Rajput has got the role of his career here, and he knows it - the actor has nailed the body language, dialogue and emotional expressions of an ambitious detective who is going through the painful process of growth and discovering himself as he tries to uncover the truth of his case.

Anand Tiwari puts in a solid performance, too, but his character isn't given the scope to be the Watson to Byomkesh's Sherlock. Tiwari has wonderful comic timing and will have you in splits in a scene at the end, and you'll wish there were more scenes like that. Neeraj Kabi as Dr. Guha is a revelation, and shows a chameleon-like adeptness in his act. The ladies, Swastika Mukherjee and Divya Menon, look pretty, and that's that.

One of the best things about the film is the almost lyrical tandem with which the production design works with the cinematography to create Byomkesh's 1940s Calcutta; a vivid, stunning picture painted with the bold brushstrokes of the sweeping camera and the minute detailing of the set. The makers can lay claim to the rare distinction of making a modern day, contemporary audience feel nostalgic for an era they didn't actually experience in reality.

The admirable and almost excruciating attention to detail is an all-you-can-eat buffet for the senses. Pay close attention and you'll be rewarded with treats hiding in plain view. When his girlfriend jilts Byomkesh in a classroom, the blackboard in the background has notes on "The History of Love" scribbled on it. Angoori Devi's face unobtrusively follows Byomkesh around Calcutta in a soap advert painted on buses and trams zooming by. Such touches are fun and will ensure repeat viewings of the film.

Nikos Andritsakis' camera captures the verve, the sleaze, the filth and the fire of a Calcutta that darkens to the alarms of air raids and flares up again to political sloganeering as our Bengali babu and his sidekick weave their way in and out of its lanes. He hasn't shied away from using noir imagery, and it's most evident in the climactic battle scene where even gore is given almost artistic treatment, and shadows of blood spurts are shown in slow motion like paint being splashed on a canvas.

The music by Sneha Khanwalkar might seem incongruous on paper; she has unleashed the most eclectic collection of Indie bands on an unsuspecting Hindi film audience. You'll be startled by the thrash metal accompanying Bakshi's various chase scenes, but will also be surprised at how well this juxtaposition of period film visuals works with contemporary sounds.

Since Byomkesh Bakshi is essentially a whodunit, the narrative is full of twists and turns, and they keep you engaged till the denouement. However, the plot does seem a tad convoluted, and the pace of the film is directly impacted by that. Another annoying weakness lies in the dialogue writing. It is ironic that such obviously intelligent filmmakers have made the mistake of underestimating the viewer's intelligence - the film is full of "helpful" over-explanations of basic deductions and plot turns.

Overall, Dibakar Banerjee and team have created an innovative, entertaining and endearing detective drama, and one must doff their hat to them for having the guts to attempt a project that is so original in both its premise and its treatment. The movie ends with the villain, alive and kicking, screaming revenge against Bakshi, and you know that an arch nemesis has been born. However, his rant makes you happy because it can mean only one thing - a sequel.
Share. Save. Connect.
Tweet
DETECTIVE BYOMKESH BAKSHY SNAPSHOT 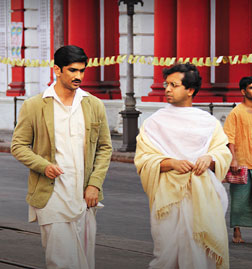 ADVERTISEMENT
This page was tagged for
Detective Byomkesh Bakshy hindi movie
Detective Byomkesh Bakshy reviews
release date
Sushant Singh Rajput, Anand Tiwari
theatres list
Follow @fullhyderabad
Follow fullhyd.com on
About Hyderabad
The Hyderabad Community
Improve fullhyd.com
More
Our Other Local Guides
Our other sites
© Copyright 1999-2009 LRR Technologies (Hyderabad), Pvt Ltd. All rights reserved. fullhyd, fullhyderabad, Welcome To The Neighbourhood are trademarks of LRR Technologies (Hyderabad) Pvt Ltd. The textual, graphic, audio and audiovisual material in this site is protected by copyright law. You may not copy, distribute, or use this material except as necessary for your personal, non-commercial use. Any trademarks are the properties of their respective owners. More on Hyderabad, India. Jobs in Hyderabad.