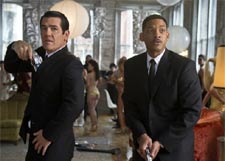 Samrat Sharma / fullhyd.com
EDITOR RATING
6.5
Performances
Script
Music/Soundtrack
Visuals
6.5
3.5
7.0
8.0
Suggestions
Can watch again
No
Good for kids
No
Good for dates
Yes
Wait for OTT
Yes
It's been 15 years since the first Men In Black came along and cemented Will Smith's stardom. It was funny, playful and highly entertaining. Sadly, the sequel relegates itself to being a middle-of-the-road comedy that never finds its footing, and despite great creature work and some supporting actors who are brilliant, the meat of the film is a bloated mess.

The film begins with Boris the Animal (Jemaine Clement) escaping from space prison. He goes back in time to 1969 and kills Agent K (Tommy Lee Jones). Agent J (Smith) travels one day before that to make sure K (this time being played by Josh Brolin) doesn't die.

The plot makes no sense, obviously, but neither do any of the smaller motivations and twists. It's just a reason for Brolin to riff on Jones for a while, and for Smith to save the world. Again.

The first half probably smacks the most of the troubled writing and production process the film has been through. It is unfunny, and without any joie de vivre. Both Jones and Smith appear bored with the film, and with each other. There is no chemistry, and no joy to be had in seeing the 2 characters we have loved for 15 years back on screen.

Things pick up when Boris the Animal comes on screen - Clement need not prove his knack for gleeful yet deadpan humour after his brilliant turn on Flight of the Conchords - as Clement plays him with a devious sense of humour. It helps that his makeup is among the best this series has done. When J travels back in time, Brolin's turn to be a dour K is incredibly fun - he is enjoying himself, and it shows.

Will Smith, however, is shockingly phoning it in. The film is filled with one-liners he spouts, and a surprising majority of those either fall flat, or are cringe-worthy. Very few gags actually work around Smith, and, for a black man in the 60s, the film never actually tries to take advantage of the potential.

Michael Stuhlbarg, as Griffin, a clairvoyant alien, is possibly the next best thing after Brolin. In a film starring Will Smith, Will Smith is not even the second best actor in it. Stuhlbarg has a thankless part - he is the lazy script-writer's solution to plot problems, as he can see and explain everything in all possible timelines. His bits let us make sense of the goings-on, and, as such, point out the breathtaking issues with a plot that needed a whole character to help it along.

Technically flawed, the script stands in complete opposition to the makeup effects, which are likely the best the series have seen. Each alien effect is thoughtfully created, and with true imagination. The film stands tall in delivering hand-created effects that surpass the CGI in their imagination and craft. It's both a joy and a privilege to watch such nuance in craft, something possibly worth the admission ticket to those of us who grew up marveling at monster effects in the '80s.

Your love for the series should not buoy you into watching the film, however. It is insipid and unfunny, and the quality is patchy at best. If you want to watch the new supporting actors have fun in the film, and see some truly great creature effects, though, wait for the DVD.
Share. Save. Connect.
Tweet
MEN IN BLACK 3... SNAPSHOT
MEN IN BLACK 3 (MIB 3) (HINDI) SNAPSHOT 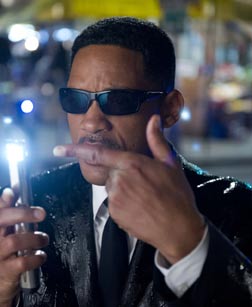 ADVERTISEMENT
This page was tagged for
men in black 3 movie hindi dubbed watch
the nirdosh dubbed in hindi movie
men in black 3 in hindi hd
men in black 3 full movie hd video in hindi
mib 3 full movie in hindi download okjatt
Follow @fullhyderabad
Follow fullhyd.com on
About Hyderabad
The Hyderabad Community
Improve fullhyd.com
More
Our Other Local Guides
Our other sites
© Copyright 1999-2009 LRR Technologies (Hyderabad), Pvt Ltd. All rights reserved. fullhyd, fullhyderabad, Welcome To The Neighbourhood are trademarks of LRR Technologies (Hyderabad) Pvt Ltd. The textual, graphic, audio and audiovisual material in this site is protected by copyright law. You may not copy, distribute, or use this material except as necessary for your personal, non-commercial use. Any trademarks are the properties of their respective owners. More on Hyderabad, India. Jobs in Hyderabad.