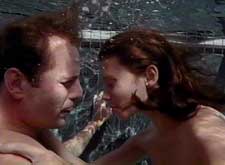 Bruce Willis plays a psychologist, Capo, who needs another for himself. The reason being that one of his patients commits suicide in front of him, the trauma of which leaves him color-blind. To get away from it all, he comes to LA and puts up at a fellow psychologist's place. Not a good idea of getting away, you say, and we agree.

The therapy group that his friend conducts has assorted people who kind of compensate for each other. For example, Sandra is a kleptomaniac apart from being a nymphomaniac (a big time maniac, isn't she?), and Clarke, the one with an obsessive compulsive disorder (finicky, to be precise) keeps counting the missing things.

Not much later, Capo's friend gets bumped off after confessing to the former that he has been receiving threats. In comes a cop - that's allright, but there also comes a svelte girl, Rose (Jane March). For quite some time, the only reason that she seems to be there is to turn on the heat. She does that on one front but dampens the other. The movie that began promisingly taut, slacks beyond redemption. If frolicking with the main character wasn't enough, she also has a relationship going with Sandra.

Why would anyone want to land themselves in the world of psychos? Well, there are reasons that are far from interesting. And, I almost forgot, there is the question of who killed Capo's friend. The movie would appear to be in no hurry to give the answers, nor does it make you want to speculate.

There are a few never-ending torrid scenes, which I doubt you will see, courtesy our censors. Willis' decision to star in the movie could have been compensated only by a Sixth Sense, and another such decision would be, well, fatal. Jane March can't act for nuts, but the most irritating presence is that Lesley Ann Warren who plays Sandra. Her pointless grinning only serves to expose her bad teeth.

The redeeming part of the movie is that it still has a proper script, and if you do decide to guess the identity of the killer, then 2 1/2 hours won't be too long a time.
Share. Save. Connect.
Tweet
COLOR OF NIGHT SNAPSHOT

ADVERTISEMENT
This page was tagged for
Color Of Night english movie
Color Of Night reviews
release date
Bruce Willis, Jane March
theatres list
Follow @fullhyderabad
Follow fullhyd.com on
About Hyderabad
The Hyderabad Community
Improve fullhyd.com
More
Our Other Local Guides
Our other sites
© Copyright 1999-2009 LRR Technologies (Hyderabad), Pvt Ltd. All rights reserved. fullhyd, fullhyderabad, Welcome To The Neighbourhood are trademarks of LRR Technologies (Hyderabad) Pvt Ltd. The textual, graphic, audio and audiovisual material in this site is protected by copyright law. You may not copy, distribute, or use this material except as necessary for your personal, non-commercial use. Any trademarks are the properties of their respective owners. More on Hyderabad, India. Jobs in Hyderabad.