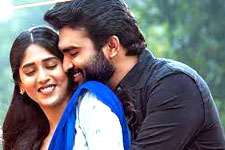 A conservative boy, Krishna (Kiran Abbavaram), falls for a free-spirited girl, Saanvi (Chandni Chowdary). He has but one gripe: she is too modern. She smokes and drinks, dresses boldly, and socializes with the opposite sex - a far cry from the innocent, virginal goddess that Krishna dreams of marrying. Losing his mother at a young age and aching for a matronly presence, Krishna harbours an oedipal desire to bring home a replacement.

Writer and director Gopinath Reddy chose a well-worn rom-com template for his debut feature film?-?a love story between polar opposites, which he modernised with contemporary characters: Saanvi as the new-age woman who dresses as she pleases, drives her own car and fights her own fights; and Krishna as the average small-town transplant, who gags at the sight of city girls partying, quick to judge them as somehow immoral.

The movie's finest moments are when it chooses authenticity and restraint over commercial story-telling tactics. In a scene where Krishna confronts a group of eve-teasers, he simply slaps them right across their faces, roughing them up in a melee, never morphing into a gravity-defying superhero. It's not the usual posse of friends and family that aid in Krishna's pursuit of love, but random city folk?-?a dosa bandi guy, a bus conductor, a fortune-teller.

For a good measure of humour, there is a cast of endearing characters. There is Krishna's father, tearfully chopping onions on a steel plate in front of the TV, watching mid-day serials. There is Sanvi's alcoholic grandmother, cradling a bottle of whiskey under her arm, demanding to know who has emptied it (it's Saanvi, of course).

And then there is a dream-sequence that would make your parents break into a smile, in which Krishna and Saanvi frolic to a song that is evocative of the 80s, perhaps the era best suited for Krishna's orthodox mindset.

But in the second half of the movie, all fun and games end, and movie starts to go off the rails as it reaches for juvenile solutions to serious problems. Krishna turns into a toxic, possessive boyfriend, barring Saanvi from partying with her friends, coaxing her to wear a jacket over her bare shoulders and such. On a whiteboard, he writes down a checklist for happiness, of which an item is that he must "change Saanvi to his liking". As if she were a ball of play-doh. Saanvi becomes defiant and angry at his increasingly psychotic behavior, but she always forgives him and welcomes him back with open arms. All he needs to do, apparently, is make her laugh, and say "sorry" five times. Huh?

Kiran Abbavaram, who plays Krishna, is something of an expert at muttering the lines under his breath, as a college kid heckling a professor during class might. He nails the jokes in the movie, but his face stiffens to marble in most other scenes, only his eyes belying any emotion. And his droning, monotonous voice chafes your ear. Chandni Chowdary has no big weight to carry in her role, and is as such a passable Saanvi.

The story never takes that final leap into the deep end of the adult pool with Saanvi's character, content instead with kicking around in the kiddie pool. Written as a bold character, Saanvi still lacks agency to stand up to Krishna, even up to the very end when he slaps her?-?yes, slaps!?-?for telling a white lie. Krishna ultimately changes his mind and sees the fault of his close-mindedness, but only at his father's behest.

Sammathame means to come to an agreement. It signifies the change that Krishna undergoes, to accept Saanvi as she is, without forcing her to change. I, for one, wish the writing team hadn't had their moment of "sammathame" with the script quite so soon?-?a few more drafts, and we might have had a truly original and enjoyable movie. 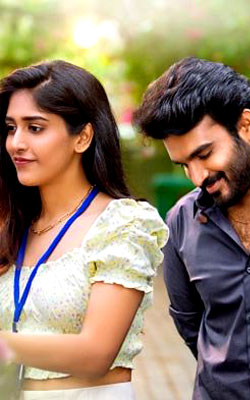 ADVERTISEMENT
This page was tagged for
Sammathame telugu movie
Sammathame reviews
release date
Kiran Abbavaram, Chandini Chowdary
theatres list
Follow @fullhyderabad
Follow fullhyd.com on
About Hyderabad
The Hyderabad Community
Improve fullhyd.com
More
Our Other Local Guides
Our other sites
© Copyright 1999-2009 LRR Technologies (Hyderabad), Pvt Ltd. All rights reserved. fullhyd, fullhyderabad, Welcome To The Neighbourhood are trademarks of LRR Technologies (Hyderabad) Pvt Ltd. The textual, graphic, audio and audiovisual material in this site is protected by copyright law. You may not copy, distribute, or use this material except as necessary for your personal, non-commercial use. Any trademarks are the properties of their respective owners. More on Hyderabad, India. Jobs in Hyderabad.