The Wolf Of Wall Street Review 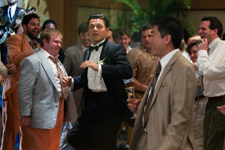 If you can't make head or tails of what that is, well, you have one reason to watch The Wolf Of Wall Street right there.

As for the rest, it's all Leo DiCaprio at his ruthless, restless, amoral, entropying awesomest. You will not like him in the dictionary sense of the word (to take pleasure in; find agreeable or congenial), anymore than the real-life Belfort's clients probably liked him. Nevertheless, as long as he's you're in his presence, he will con you (or Quaalude you, more likely) into believing that this man on water walks.

The story goes like this. Jordan Belfort, an ambitious little s#!t from the bowels of The Bronx, is in Wall Street, home. After being informed that he is lower than pond scum on his first day at L. F. Rothschild & Co., he goes on to joyously work his way up to that of a rookie broker. As luck would have it, his first day as a bone-a-faidee broker turns out to be October 19, 1987, a. k. a. Black Monday, the day when stock markets all around the world took a nose dive back to their home with Hades.

Belfort, along with all other young hopefuls, is shown the door, but not until his boss Mark Hanna (the fantastic Matthew McConnaughey) shows him that the door to riches is paved with sex and cocaine.

On finding his place in the world at Investor Centre, a penny stock brokerage in Long Island, the spanking new dealer in souls decides to strike out on his own along with a ragtag bunch of his childhood friends, all of whom could "sell anything they could get their hands on; mostly weed". Drive carefully. Meteoric rise up ahead.

From here on, you're watching the film as though you're looking indulgently upon an enchantingly retarded kid. Extravagance is too gentle a word for what happens after in this nihilistic galaxy of debauchery, with Jordan Belfort as its supermassive black hole, sucking in everything close to him.

And, where it gets weird is that you love every filthy, disgusting, out-there part of it. You love that they can get away with using midgets as darts. You love the cocaine being snorted off of boobs. You love the Quaaludes (apparently the drug to beat all drugs, of Indian origin, no less) being popped like Vics. You love the blatant pilferage, the matter-of-fact amorality, the sheer abandon with which the young at Belfort's firm Stratton Oakmont bear hug similarly extravagant futures, and the way Belfort spreads them out for the ambitious young men and women like so many cards up for grabs.

Most of all, you love Leo DiCaprio in what is easily his most orphically exuberant performance ever. Watch especially for a scene where he categorically demonstrates the various stages of doped-out, or, to put in in a more descriptive manner, crapulence (not a "bad word". Look it up.). DiCaprio goes from wide-eyed innocent with high aspirations to high-powered shit tank before you can say "say", and all you can do is try to find Dorian Grey's painting.

Then there are the two women: Cristin Milioti as Belfort's girl-next-doorsy "before" wife, and Margot Robbie, his stunning sexpot "after" wife. While Milioti is appropriately loving and supportive and girl-next-doorsy, it isn't too much of a role. However, this could easily be the talented actress' big break. As for Margot Robbie, gorgeous as she is, she tends to get on your nerves. However, that seems to be more a fault with the role, which requires her to speak in a nasal Brooklyn accent, which sometime takes on the euphonious tonality of nails dragged down a black board.

Rob Reiner, Jonah Hill, P. J. Byrne, Jon Favreau, Dustin Hoffman's little boy Jake Hoffman... the list of fantastic actors decorating this tallest of all tales goes right on. They're all having an insane blast and it shows.

Scorsese uses his voice-over schtick to full effect, getting us used to the protagonist, showing us the grandiosity of the filth inside his mind. We know right from the beginning, then, that what we'll be hearing from that moment on will be the longest goddamned sales pitch squeezed into the shortest three hours. The screenplay shows all the variability of a twisted mind. There are times of downright bourgeois normality which the surrounding bizarreness makes seem Puritan. If the film had ended at the moment when Belfort is at the peak of his "career", there is no doubt whatsoever that every single person would bequeath their morals to hell in return for limitless wealth.

But then reality sets in, and this is where ambiguity sets. We don't really know what the spectacle is saying. Yes, the decay is spectacular on the other side of the wormhole. But then, the decay doesn't seem to have much in terms of consequences. The biggest moral lump in the neck is that all of this is real. The Jordan Belfort who screwed over thousands of people and made millions of dollars exists, and is now obviously going to make further piles of money off of the wonderful cinematic extravaganza.

There is even a little pang of guilt over the Rs. 150 that we personally put into his apparently limitless coffers. The movie, if it were fiction, would've been something awesome that would've swept clean its own path to numerous little golden men. The problem, though, is that now is perhaps not the best time to rub it into people's faces that the 1% stays in the one 1% even after it is caught red-handed in its shenanigans. But then again, we live in a country where super-rich screwer-overs are venerated, chanted after, voted for and put personally in positions where the screw-overing can be continued unabated.

Watch The Wolf On Wall Street for the achievement in nihilistic display that it is. Watch it because it's high time DiCaprio got his hands on those elusive Academy Awards. Don't be surprised though at the inevitable guilt you might feel once you've had time to think about it.
Share. Save. Connect.
Tweet
THE WOLF OF WALL... SNAPSHOT
THE WOLF OF WALL STREET SNAPSHOT 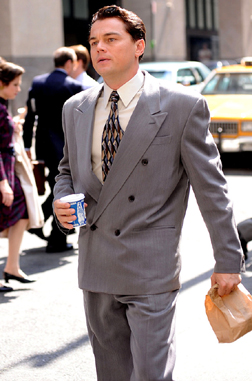 ADVERTISEMENT
This page was tagged for
The Wolf Of Wall Street english movie
The Wolf Of Wall Street reviews
release date
Leonardo DiCaprio, Jonah Hill
theatres list
Follow @fullhyderabad
Follow fullhyd.com on
About Hyderabad
The Hyderabad Community
Improve fullhyd.com
More
Our Other Local Guides
Our other sites
© Copyright 1999-2009 LRR Technologies (Hyderabad), Pvt Ltd. All rights reserved. fullhyd, fullhyderabad, Welcome To The Neighbourhood are trademarks of LRR Technologies (Hyderabad) Pvt Ltd. The textual, graphic, audio and audiovisual material in this site is protected by copyright law. You may not copy, distribute, or use this material except as necessary for your personal, non-commercial use. Any trademarks are the properties of their respective owners. More on Hyderabad, India. Jobs in Hyderabad.