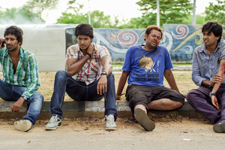 Ravi Kandala / fullhyd.com
EDITOR RATING
5.5
Performances
Script
Music/Soundtrack
Visuals
6.0
6.0
5.0
5.0
Suggestions
Can watch again
No
Good for kids
Yes
Good for dates
No
Wait for OTT
Yes
There is Mithun Chakravarthy in Bollywood - the guy who acted in a 100 odd films in spite of many of them either not seeing the light of the day or, if they did, not lasting beyond a few shows in the theatres. In the Telugu film industry, Varun Sandesh sure seems to be aiming for that kind of a niche. Several of his movies have come and gone in the last 2-3 years, with not much to differentiate amongst them, including their flop status.

So it was with some weariness that we trod towards yet another Varun Sandesh starrer. However, the buzz around this one was good, and we heard encouraging things like actor Nani buying a stake in the film after watching it.

Could it be true then? Has Varun Sandesh actually acted in a decent flick that might elicit a chuckle or two from us? Has he learnt his lesson after the innumerable flops?

Well, we don't know about Varun learning a lesson, but we'll say one thing - D For Dopidi is surely far removed from his "genre" of movies. It casts him as a flirt and a Casanova, but thankfully, does not harp on that angle.

The film is about four youngsters (Varun Sandesh, Sundeep Kishan, Naveen and Rakesh), all of whom need money. Since earning the kind of money they want legally is out of question, they decide to rob a bank with fake guns and zero guts. They enter the bank, scare people and manage to get the money from the safe into a bag, but that is where their lucky streak ends.

Two more gangs enter the bank to rob it, police surround the bank, a couple of people are shot, and our heroes find their hearts slipping into their guts all the time. Do they make it out of the bank in time? And do their troubles end and dreams come true? This is the story that D For Dopidi narrates.

D For Dopidi is fun for most part of its running time, until it decides to add an emotional angle or two. The goofball characters, the amateurish attempts of our heroes and their persistent distractions are all funny, well-written and engaging. There is also slice-of-life humor woven into the concept, that lends itself to a lot of jokes (like where the protagonists discover that the manager left half-an-hour early as it was a Saturday, to take his family out). The movie has a super-short runtime of just 125 minutes, but some unnecessary emotional content in the second half makes it seem a tad longer.

The film is set back by some silly flashbacks, especially the one woven for Tanikella Bharani. Also, the sudden change in hearts of our heroes rings false, as does the entire bank staff agreeing to play guardian angels for the leads. And some of the humor is pretty juvenile, like in the scene where the protagonists tell the police that they will settle for two small helicopters instead of one.

Varun Sandesh plays Varun Sandesh without the slightest amount of variation, while Sundeep Kishan primarily plays an extension of all the characters that he's done so far. The other leads are fine, while the supporting cast also play a stellar role.

Siraj Kalla, a first-time writer-director, does a solid job for most part of the film. Most of the movie is in one location, and the DoP does well in not allowing déjà vu to set in. The film seems to have been made on a shoestring budget (not that it required mega budgets), and it shows in a lot of places.

D For Dopidi is F for fun until it decides to turn E for emotional. We'll be cheesy, too, and say this - go along the R for ride, you won't completely R for regret it.
Share. Save. Connect.
Tweet
D FOR DOPIDI SNAPSHOT 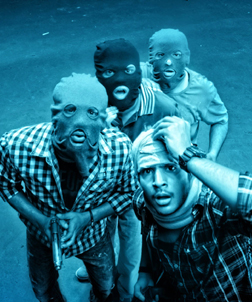 ADVERTISEMENT
This page was tagged for
D For Dopidi telugu movie
D For Dopidi reviews
release date
Varun Sandesh, Sundeep Kishan
theatres list
Follow @fullhyderabad
Follow fullhyd.com on
About Hyderabad
The Hyderabad Community
Improve fullhyd.com
More
Our Other Local Guides
Our other sites
© Copyright 1999-2009 LRR Technologies (Hyderabad), Pvt Ltd. All rights reserved. fullhyd, fullhyderabad, Welcome To The Neighbourhood are trademarks of LRR Technologies (Hyderabad) Pvt Ltd. The textual, graphic, audio and audiovisual material in this site is protected by copyright law. You may not copy, distribute, or use this material except as necessary for your personal, non-commercial use. Any trademarks are the properties of their respective owners. More on Hyderabad, India. Jobs in Hyderabad.