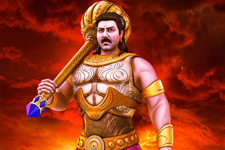 Nupur Barua / fullhyd.com
EDITOR RATING
4.0
Performances
Script
Music/Soundtrack
Visuals
7.0
3.0
5.0
5.0
Suggestions
Can watch again
No
Good for kids
Yes
Good for dates
No
Wait for OTT
Yes
If one reads the Mahabharata by Ved Vyas, one does not need to read the sacred texts of Indian philosophy - or so it is said. The mega epic contains all the life lessons that one will ever need, and is a masterpiece in itself. It has lent itself to numerous movie and television serial plots over the years, not to mention an actual retelling of the epic as a series a few times (including the present version on a popular channel).

The animated adaptation, presented by PEN, announces right at the beginning that it is a simplified account of the great book, to introduce children to Indian literature and culture. A noble intention, except that it falls short of so many expectations.

It is understood that a beginner's guide to the Mahabharata will lose most of the complicated plot points. The movie therefore begins with a magical eagle (hawk?) telling two brothers and a few animals in urban India that greed and jealousy leads to destruction. The bird then moves into the story, ignoring the stories of Ganga, Satyavati, Bheesma, and others, and jumps to Kunti (Deepti Naval) giving birth to an illegitimate child, whom she abandons.

Kunti then marries Pandu and has three sons, and two step sons, while Dhritirashtra and Gandhari give birth to Duryodhan and 99 other sons. The story then moves to Karna (Anil Kapoor) finding a friend in Duryodhan (Jackie Shroff), Arjun (Ajay Devgn) winning Draupadi's (Vidya Balan) hand in marriage, and the five brothers, including Yudishthir (Manoj Bajpayee) and Bheem (Sunny Deol), being allocated a barren region in which they build their palace of illusions, Indraprastha.

When Shakuni (Anupam Kher) suggests the great gamble, Draupadi's honour is saved, thanks to Krishna (Shatrughan Sinha). A quick montage of their exile is followed by the lengthy battle of Kurukshetra, in which Bheesma (Amitabh Bachchan) loses his life. Good finally triumphs over evil, to put it mildly, and all's well that ends well.

The narration is more than a little haphazard. Characters and interpersonal relationships are not dealt with in detail, no doubt to maintain the "simplicity", but Arjun's sudden reluctance to kill the Kauravas, and Duryodhan's intense hatred for his cousins, become rather bewildering.

Irrelevant sequences, such as Draupadi's introduction and the tour of Indraprashtha, take up too much time. Later, Krishna's revelation of his "virat roop" to Arjun becomes too complicated.

Given that it this is supposed to be a children's version, the story could have stuck to simpler, black-and-white portrayals of bravado, adventure, relationships between parents and offspring, and emotions like anger and love. And a few sequences showcasing the rivalry between the cousins and the helplessness of the elders would have helped. At almost two and a half hours, the screenplay meanders from one not-so-interesting plot point to the next.

The problem lies not only with the narrative, but with the animation as well. It is amateurish at best. The characters are drawn to resemble the actors who lend their voices to them, and the results are not pretty. Draupadi as a 2D cartoon, made to look like Vidya Balan, reminds you more of a zombie gone wrong. All the characters have too much teeth, and the visual effects in the palace of illusions and battlefield sequences can give you a headache and eye problems.

The colours and the clothes are unimaginative (the mojris are particularly distracting), and the architecture depicted in the movie is skewed. The music is irritating, but the background score is decent.

The only saving grace in this animated feature is the ensemble cast of voiceovers. Amitabh Bachchan's baritone is instantly recognisable, and appropriate for the character of Bheesma. Vidya Balan and Deepti Naval do justice to their roles, as do Jackie Shroff and Sunny Deol.

Manoj Bajpayee as Yudishthir is a little difficult to digest, as is Anil Kapoor as Karna, but their performances are almost flawless. Anupam Kher adopts a nasal voice to bring menace to his character, Shakuni, and it works, to an extent (sometimes it gets annoying).

The best way to digest this new version of the epic is to listen to it. It would make a good audiobook, but the story would still be tiresome. If you want your child to see these characters come to life, buy the DVDs of the B R Chopra series, or make them read the Amar Chitra Katha version, instead of subjecting them to this yawn-inducing, confusing movie.
Share. Save. Connect.
Tweet
MAHABHARAT SNAPSHOT 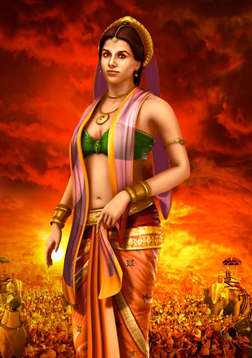 ADVERTISEMENT
This page was tagged for
Mahabharat hindi movie
Mahabharat reviews
release date
Amitabh Bachchan - Bheeshma (voice), Sunny Deol - Bheem (voice)
theatres list
Follow @fullhyderabad
Follow fullhyd.com on
About Hyderabad
The Hyderabad Community
Improve fullhyd.com
More
Our Other Local Guides
Our other sites
© Copyright 1999-2009 LRR Technologies (Hyderabad), Pvt Ltd. All rights reserved. fullhyd, fullhyderabad, Welcome To The Neighbourhood are trademarks of LRR Technologies (Hyderabad) Pvt Ltd. The textual, graphic, audio and audiovisual material in this site is protected by copyright law. You may not copy, distribute, or use this material except as necessary for your personal, non-commercial use. Any trademarks are the properties of their respective owners. More on Hyderabad, India. Jobs in Hyderabad.