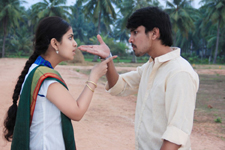 Kritika Deval / fullhyd.com
EDITOR RATING
7.0
Performances
Script
Music/Soundtrack
Visuals
6.5
7.0
8.0
6.5
Suggestions
Can watch again
Yes
Good for kids
Yes
Good for dates
Yes
Wait to rent it
No
A simple story told well goes a long way in overcoming any and all kinds of gimmick deficiency. That Uyyala Jampala is a fine example of just such a story is not something we can stress enough.

A sleepy village plays the backdrop to Suri's (Raj Tarun) seemingly sleepy life, where all that is exciting is anchored at Uma (Avika Gor), his maridelu from hell. Not that he knows it, of course. He's content enough with his kodi penta business and his little house next to hers, and makes a part-time job of tormenting her.

The status quo isn't so for long, though, and it is only when Suri comes within an inch of losing the impish and innocent Uma that he realises that his anchor is about to fall apart.

And that, readers, is all the tale it takes to make good cinema, a tale Uyyala Jampala transcends in the telling alone.

Don't get us wrong. This is no fast-paced flick packed to the brim with masala, nor is it completely lacking in the traditional elements of what is considered to be of mass appeal. There are manly enough men, roaring enough emotions, a sentimental mother, a couple of fun fights, and even an item number of sorts.

There is also so very much honesty and ingenuity behind this veneer that the veneer only serves to decorate, never overwhelm. The dialogue, easy and natural for the most part, certainly helps, as does the astonishingly well-handled screenplay, backed by a definite vision on part of the film's debutant director, Virinchi Varma.

Where Varma flags is with the pacing. Perhaps it is the transition from the short film medium to a longer format, but there were times, though far and few, when we wished we were watching this on YouTube.

This tendency to linger is only ameliorated by the fact that the subjects of this action are so very appealing to watch. While Avika Gor (of Balika Vadhu fame) is certainly expressive and quite charming, Raj Tarun, IOHO, is the bigger find. He balances his amazingly multi-faceted role with a nonchalance which is nevertheless intense. An actor who can seem as languid as vital, both at the same time, is definitely one to watch out for. Punarvani as Uma's best friend who has a crush on Suri is yet another talented find, and, to be honest the more nuanced of the two female performers.

To be sure, a role like that of Uma's would've been played better by a Telugu girl, perhaps Swathi (Swamy Ra Ra, Ashta Chemma), and Gor has a tendency to annoy, but all other performances lead and otherwise come very close to flawless.

Music by Sunny M R is as sunny as the composer's name, as is the background track, both of which will have you looking them up before you even leave the theatre.

The cinematography, although not out of this world, is nevertheless apt, which is perhaps the more important quality.

Whether it was beginner's luck on part of Verma, or sheer talent, or the fact that he managed to get megaliths of the field to back him on his very first venture, or a strategic culmination of all three, we hope there's a lot more where that came from. And you'll only know why when you see it.
Share. Save. Connect.
Tweet
UYYALA JAMPALA SNAPSHOT 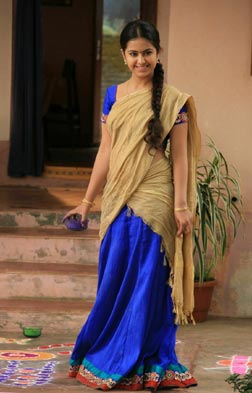 ADVERTISEMENT
This page was tagged for
?????? ????? ?????? ????
Uyyala Jampala Telugu movie
uyyala jampala movie review
Uyyala Jampala telugu movie
Uyyala Jampala reviews
Follow @fullhyderabad
Follow fullhyd.com on
About Hyderabad
The Hyderabad Community
Improve fullhyd.com
More
Our Other Local Guides
Our other sites
© Copyright 1999-2009 LRR Technologies (Hyderabad), Pvt Ltd. All rights reserved. fullhyd, fullhyderabad, Welcome To The Neighbourhood are trademarks of LRR Technologies (Hyderabad) Pvt Ltd. The textual, graphic, audio and audiovisual material in this site is protected by copyright law. You may not copy, distribute, or use this material except as necessary for your personal, non-commercial use. Any trademarks are the properties of their respective owners. More on Hyderabad, India. Jobs in Hyderabad.