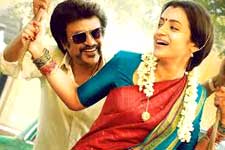 Swaroop Thotada / fullhyd.com
EDITOR RATING
6.0
Performances
Script
Music/Soundtrack
Visuals
7.5
3.0
8.0
7.5
Suggestions
Can watch again
No
Good for kids
Yes
Good for dates
Yes
Wait to rent it
Yes
Peta succeeds as long as it indulges in its unabashed worship of the onscreen persona of Rajinikanth. For much of its runtime, this reverential celebration of a film has nothing in mind except to pay tribute after tribute to this Thalaivar, the borderline superhuman that decades of Rajinikanth's career managed to create. You might feel at some point that this whole Rajinification is overwhelming, but isn't that precisely what has been missing from Rajinikanth films lately? If Pa Ranjith's dabbling in his ham-handed attempts at humanizing Rajinikanth and the fate of those movies are any indication, audiences aren't keen to sing along when the superhuman aura that has been an integral part of his appeal is severed from him, even if it gives the long-forgotten actor in return.

Karthik Subbaraj also rightly maintains that all this hoopla has to be backed by narrative grit and integral writing, but somehow he stumbles in intertwining his two objectives. No Rajinikanth film after Padayappa convincingly pulled off the formidable stunt of seamlessly weaving together Rajinikanth's larger-than-life persona and an engaging dramatic narrative. This is not a complaint, for such a feat requires dexterity of uncommon proportions, and with Padayappa having already used up the biographical-style narrative, there can only be so many ways to attain one goal. However, it is not Padayappa but Basha that Subbaraj considers to be the golden standard to mimic.

This is evident from how this movie is a rehash of many tropes from that milestone film. However, this plays out more like an homage than a recycling. Subbaraj himself admits this in an opening slide where he thanks his Thalaivar and goes on to say that this film was inspired from and performed by Rajinikanth. Unlike Kabaali, Kala or Robo, this isn't a reinvention or reinterpretation of the star but a revisit to his '90s swagger and panache. Sadly this isn't the icing on the cake, it is all we get.

Subbaraj hardly adds any flesh to the skeleton he borrows from Basha. Yes, Rajinikanth is surrounded by an ensemble cast, the writing boasts of surprises and the movie is fertile in its symbolism, foreshadowing, visual versatility and punchy lines, but it fails to emerge higher than the sum of its parts. Once all his tricks are exhausted, Rajini has nothing much to do except be a perfunctory accessory to a generic revenge gangster drama. This unapologetic reliance on star power and formulaic tropes isn't helped by overstuffed casting. While Trisha and Simran are criminally underutilized, Vijay Sethupathi and Nawazuddin Siddiqui are uncomfortably overshadowed by the lead actor.

It would have been a wiser decision to infuse the "Rajinification" subtly into the story Subbaraj wanted to tell rather than to start his story after almost half of the runtime ran out. You can't help but feel like it is an entirely different movie post interval. While the first hour takes pains to establish the spoilt Mike and his equally mischievous dad (Bobby Simha and Aadukalam Naren) as antagonists, it doesn't go well when one of them is simply discarded and the other is rendered a buffoon as soon as the stage is set for the "main villain". It also doesn't help that Simhachalam (Nawazuddin Siddiqui) is a bed-ridden sulky bore who is too underwritten to inspire any actual fear. His megalomaniacal laughter is just a generic superficiality of a formulaic cardboard villain. It all eventually falls on the shoulders of Jithu (Vijay Sethupathi) to rise to the occasion and be a worthy adversary, but it's too late by the time his character acquires any conceivable prominence in this beaten-to-death story.

It helps if you convince yourself that you are there just to witness the Superstar-swag revitalized and that all these plot mechanics are but unapologetic excuses to dish out one Rajini-ism after the other. The film surely is worth every rupee on that front. Anirudh's soundtracks are as spot on, and so is Tirru's uber-stylish cinematography that drips with dramatic effervescence. These crafts along with the costume design and the way stunts are choreographed signal the director's unflinching adoration of the star.

Rajinikanth also steps up and proves yet again that his charm and charisma haven't faded one bit and that he is still every ounce the same superstar whose glory is matched only by his capability. It would certainly have helped if the movie were shorter by a half hour, but hey, this isn't a world known for perfect things.
Share. Save. Connect.
Tweet
PETTA (TAMIL) SNAPSHOT 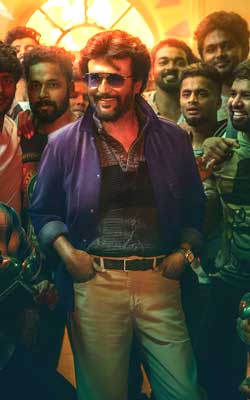 ADVERTISEMENT
This page was tagged for
petta tamil movie in hyderabad
petta movie tamil
petta tamil movie in hyd
petta movies full tamil
petta tamil full movie watch
Follow @fullhyderabad
Follow fullhyd.com on
About Hyderabad
The Hyderabad Community
Improve fullhyd.com
More
Our Other Local Guides
Our other sites
© Copyright 1999-2009 LRR Technologies (Hyderabad), Pvt Ltd. All rights reserved. fullhyd, fullhyderabad, Welcome To The Neighbourhood are trademarks of LRR Technologies (Hyderabad) Pvt Ltd. The textual, graphic, audio and audiovisual material in this site is protected by copyright law. You may not copy, distribute, or use this material except as necessary for your personal, non-commercial use. Any trademarks are the properties of their respective owners. More on Hyderabad, India. Jobs in Hyderabad.