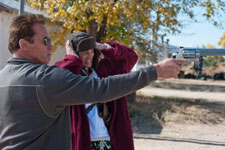 Kritika Deval / fullhyd.com
EDITOR RATING
6.0
Performances
Script
Music/Soundtrack
Visuals
6.0
4.0
7.0
8.0
Suggestions
Can watch again
Yes
Good for kids
No
Good for dates
No
Wait to rent it
No
What do you get when you put together a souped-up Corvette C6 ZR-1, Arnold Schwarzenegger, and a Korean director? From what we could see - pure, unadulterated, and unhampered-by-intellect fun.

For, despite all the characters in The Last Stand, it belongs entirely to Schwarzenegger, the Corvette, and, for a few delightful moments, a 70-year-old Steel Magnolia with a rifle.

You see, it all goes somewhat like this. Drug cartel king-pin Gabriel Cortez (Eduardo Noriega) makes a slick escape from an FBI convoy, steals the aforementioned machine, and makes his way to the Mexican border at 200mph, leaving carnage in his wake, thanks to his army of mercenaries whose job it is to keep his way clear.

However, to get through the border, he must go through the ultimate small town Summerton Junction, where, who do you have waiting for him but Sheriff Ray Owens (Arnold Schwarzenegger), oak-hewn face and body, and ridiculous Austrian accent in tow. All of a sudden, the "army" is stumped.

You see, whenever Owens is at hand, these guys have a bizarre propensity to waste bullets, and we mean all of their state of the art equipment, Bazookas et al. And, hence, Owens and his four "deputies" own them, all with their school bus filled with Civil War era ammo.

Cortez, of course, has no idea. So, when he finally makes it to Summerton, confident that there would be nothing to come in his way, it's time for the ultimate showdown.

To call The Last Stand a throwback to the '80s would be accurate, but only partially so. It is more like a cheeky, whimsical (if you can actually apply the adjective to the numerous ways people die), thoroughly enjoyable tribute to the wham-bam-thank-you-ma'am style of film-making, with Schwarzenneger at its epicentre.

The script and the plot are sort of like the bubble wrap around a powerful gadget, obviously put in simply because they couldn't just shoot a bunch of fight sequences and leave it at that, and just as flimsy. The screenplay falters every-time the action goes down. That is not to say that there aren't a few giggle-inducing wise-cracks here and there, but it is all very lazily executed.

Some of the giggles, of course, are purely unintentional, like FBI Agent John Bannister (Forest Whitaker) calling Owens a country hick of a sheriff, after only hearing the latter speak on the phone in his heavy Austrian accent.

Don't bother looking for thespic prowess either. It was deemed unnecessary, and rightly so. With the Governator making a solo comeback after a decade, doing what he does best, who needs distractions?

The true genius of the movie shines through when the guns are pulled out. Have you ever sat in absolute silence for a second and then burst out in hysterical laughter upon seeing a man blown up into pieces, blood spewing everywhere? Well, we hadn't either, before we saw The Last Stand.

The camera work and direction are spectacular, and the music keeps pace with what's happening on screen.

Leave your grey matter at home, do not try to analyze anything, and do NOT sit next to someone who thinks he knows his wheels. 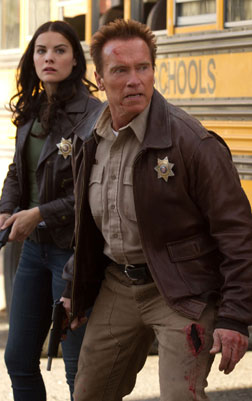 ADVERTISEMENT
This page was tagged for
The Last Stand english movie
The Last Stand reviews
release date
Arnold Schwarzenegger, Arron Shiver
theatres list
Follow @fullhyderabad
Follow fullhyd.com on
About Hyderabad
The Hyderabad Community
Improve fullhyd.com
More
Our Other Local Guides
Our other sites
© Copyright 1999-2009 LRR Technologies (Hyderabad), Pvt Ltd. All rights reserved. fullhyd, fullhyderabad, Welcome To The Neighbourhood are trademarks of LRR Technologies (Hyderabad) Pvt Ltd. The textual, graphic, audio and audiovisual material in this site is protected by copyright law. You may not copy, distribute, or use this material except as necessary for your personal, non-commercial use. Any trademarks are the properties of their respective owners. More on Hyderabad, India. Jobs in Hyderabad.