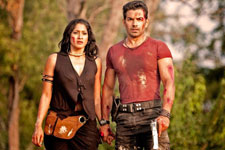 Kritika Deval / fullhyd.com
EDITOR RATING
2.0
Performances
Script
Music/Soundtrack
Visuals
2.0
1.0
6.5
7.0
Suggestions
Can watch again
No
Good for kids
No
Good for dates
No
Wait to rent it
No
Imagine lush forests that strike a primeval fear into your heart via their mere existence. Imagine a camera that dwells on all this fearsome beauty with the sole intention of intensifying the beauty and heightening the fearsomeness. Imagine the glorious and ruthlessly wild creature that considers this magnificent domain both her home and her hunting ground. Imagine her rendered graphically so lovingly that menace and grace ripple together every time she moves.

Now, imagine that amidst all of this evidence of the gruesome glory of nature lies a tale involving what is supposedly nature's most glorious creation - the stupid, stupid man. Thus, you have Roar - Tigers Of Sunderbans.

Let's take a look at this tale. A young photojournalist rescues a tiger cub, and incites the wrath of its mother, the aforementioned glorious creature, who traces her baby's scent to the photojournalist, hunts him down, and kills him.

Enter Pundit (Abhinav Shukla), the captain of a commando team and the older brother of the poor boy, who wants to do unto the tigress what the tigress did unto his brother. Thus, he descends unto forest, gathers a team of random men, and women who don't quite seem to know what clothes are for, and starts hunting for one of the most fearsome killers in existence.

Oh, and there is also a female game warden (Achint Kaur) who, for some reason, seems to have no choice but to follow these people around alone.

Let us set aside the fact that for all the love that the cameras show to their setting, the protagonists themselves seem decidedly against nature, and think about how these people get their weapons into this protected territory instead. Can't think of a reason? Well, how about the fact that the greatest predator in the Sunderbans, which is famous for its golden Royal Bengal Tigers, seems to be a white tigress? Now, we know our filmmakers like the female variety in their films to be white, but this is maybe taking the penchant too far, no? Okay, how about the aforementioned lack of clothing on the women? There doesn't seem to be enough room for all of the bug repellant these women need!

These questions, and more, are sure to plague your mind as you try to force it to pay attention to the movie, because otherwise you might have to notice what is actually happening in the film, which could easily cause your mind to break.

It isn't just that the plot moves in a completely asinine manner, aided by absolutely random editing. Or even that the plot is held up by a premise too shaky to support it. The problem with Roar is that the makers don't seem to care for a story beyond whatever is necessary for them to take cool pictures of the forest, or to show off all of the cooler things that they can do with their computers. However, as cool as both of those things are, they don't nearly make up for the jerky screenplay and the indifferent acting by the mannequins they are trying to pass off as actors.

As far as the actors are concerned, it is very difficult to figure out where bad acting ends and bad characterization begins. Achint Kaur comes close to giving a decent performance, but is beaten not only by the utter idiocy of all the things her character must do, but also by the brevity of her screen presence despite the trailers making it seem as if her role is substantial.

The background track rendered by Resul Pookutty, though, is as masterfully handled as the visuals are, so much so that this would've been so much of a better film had it just been a series of montages of the Sunderbans.

If you feel beautiful visuals and masterful camerawork are enough to make you sit through two whole hours of plastic people mouthing asinine lines and looking scared, then, we must tell you, you are mistaken. You will walk out not more than 20 minutes into the film, and you won't even regret it.
Share. Save. Connect.
Tweet
ROAR - TIGERS OF... SNAPSHOT
ROAR - TIGERS OF SUNDERBANS SNAPSHOT 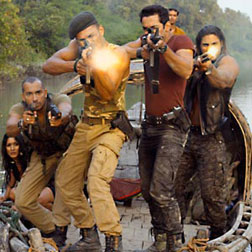 ADVERTISEMENT
This page was tagged for
Roar - Tigers Of Sunderbans hindi movie
Roar - Tigers Of Sunderbans reviews
release date
Abhinav Shukla, Himarsha V
theatres list
Follow @fullhyderabad
Follow fullhyd.com on
About Hyderabad
The Hyderabad Community
Improve fullhyd.com
More
Our Other Local Guides
Our other sites
© Copyright 1999-2009 LRR Technologies (Hyderabad), Pvt Ltd. All rights reserved. fullhyd, fullhyderabad, Welcome To The Neighbourhood are trademarks of LRR Technologies (Hyderabad) Pvt Ltd. The textual, graphic, audio and audiovisual material in this site is protected by copyright law. You may not copy, distribute, or use this material except as necessary for your personal, non-commercial use. Any trademarks are the properties of their respective owners. More on Hyderabad, India. Jobs in Hyderabad.