Pranita Jonnalagedda / fullhyd.com
EDITOR RATING
6.0
Performances
Script
Music/Soundtrack
Visuals
8.0
6.0
6.0
7.0
Suggestions
Can watch again
Yes
Good for kids
Yes
Good for dates
Yes
Wait to rent it
No
Have you ever seen nails grow? Have you seen the breeze flow? Second Hand is a lot like that - you won't know how it happened or passed by, but it's sure to let you know that it's made an impact.

So let's get started with a sneak peek into this film, that has impressed us quite a bit. Second Hand is a set of 3 stories of 3 people - Santhosh (Sudheer Varma), Subbarao (Kireeti Damaraju) and Sahasra (Dhanya Balakrishna).

After we have started to sympathise with the 2 blokes, and have decided that "love is like a lemon under a tractor's tyre" and girls are the drivers of that tractor, the duo meet Sahasra, by chance again, and take us into her story, which makes us decide that "no guy can get a 100/100" and so shouldn't crib about "all girls being the villains of their life".

The film follows each character into their life, that is filled with errors, just like ours. They fall in love, get cheated, are confused, and make mistakes, just like all of us do. This is the most likeable quality of Second Hand - it is a movie that most of us can connect with.

The director tries to gracefully portray the reality of today's youth, with the help of a gripping story. The film gives you a look at the lives of the young Indians of the 21st century, without the need for any vulgarity, a quality many independent Tollywood films today seem to portray. There is no attempt, in the film, to be judgmental - the movie only tries to entertain you with its sprinkling of reality.

Clever dialogues and an engrossing screenplay help the movie work. Even though the plot slows down in the second half, it's easy not to care beacause you are still hung up on the quirkiness of the first half.

However the movie has its glitches. The dubbing seems out of sync in places. And as mentioned earlier, the second half is slow-paced, and wavers into an unnecessary elaboration of scenes. Also, the 3rd story involving Dhanya seems unconnected.

The story line is flimsy, and so, rides heavily on the story-telling technique, which again is slightly incompetent. Plus, the editing gives the film a patchy feel.

However, Second Hand is replete with good performances. Dhanya's role, being the longest in the film, gives her scope to show varied emotions, of which she does a commendable job. She is mean, she is sad, she is happy and is confused. She makes all her 3 characters a treat to watch.

Sudheer Varma's performance will ensure that we will see him on the silver screen again. He has a natural flair for comedy, and doesn't attempt to be a macho man - he seems content with his role as the vulnerable guy who faints when a girl "slaps" him.

However, Kireeti Damaraju's performance is the best of them all. His portrayal of Subbarao, whose sole aim in life is to get married, who laughs at his own jokes and who is easily flattered by praise, is very good. Subbarao feels so real that we wonder whether anyone else could have played the same role with such conviction. It's sad that we haven't seen much of Damaraju in most of the film promotions that have been doing the rounds.

The rest of the performances contribute significantly. Sri Vishnu and Anuj Ram have brief but interesting presences in the film. Posani Krishna plays a small but crucial role. And director Kishore Tirumala's short appearance has an effect.

We wouldn't complain about the choice of locations, as they make the film seem real despite seeming regular.

The music isn't something to rave about, but the track called "Subbarao", that features in the end titles, stands out and evokes a few guffaws.

Flaws apart, Second Hand reinstates our belief that there is space in the Telugu film industry for movies that do not come with a formulaic "package" or a brand tag. The story isn't out of the world or extraordinary, but the treatment that has been given to it is fresh and creative. You may not talk about the film 10 years down the line, but when in the theatre, you are sure to be glued. Isn't that what entertainment is all about?
Share. Save. Connect.
Tweet
SECOND HAND SNAPSHOT 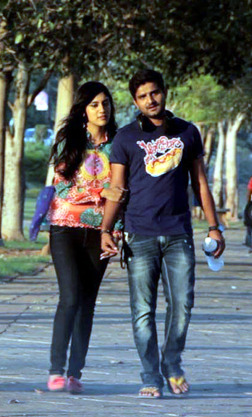 ADVERTISEMENT
This page was tagged for
Second Hand telugu movie
Second Hand reviews
release date
Dhanya Balakrishnan, Sudheer Varma
theatres list
Follow @fullhyderabad
Follow fullhyd.com on
About Hyderabad
The Hyderabad Community
Improve fullhyd.com
More
Our Other Local Guides
Our other sites
© Copyright 1999-2009 LRR Technologies (Hyderabad), Pvt Ltd. All rights reserved. fullhyd, fullhyderabad, Welcome To The Neighbourhood are trademarks of LRR Technologies (Hyderabad) Pvt Ltd. The textual, graphic, audio and audiovisual material in this site is protected by copyright law. You may not copy, distribute, or use this material except as necessary for your personal, non-commercial use. Any trademarks are the properties of their respective owners. More on Hyderabad, India. Jobs in Hyderabad.