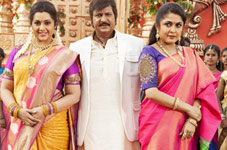 Ravi Kandala / fullhyd.com
EDITOR RATING
2.0
Performances
Script
Music/Soundtrack
Visuals
5.0
2.0
2.0
4.0
Suggestions
Can watch again
No
Good for kids
No
Good for dates
No
Wait to rent it
No
One of our colleagues began his review of Soukhyam with this:


perfunctory (adj.): (of an action) carried out without real interest, feeling, or effort.

This one word summarises Soukhyam (and a lot of Telugu cinema in general).
What is it but coincidence that yours truly watches a movie the very next day and realizes that truer words were never spoken? Mama Manchu Alludu Kanchu is perfunctory in every sense of the word, and then some, and then some more.

Picture this scene - the heroine Sruti (Poorva aka Shamna Kasim) finds out that the guy she's in love with, Balraju (Naresh), had faked everything, from his name to his profession to his status to his parents. She finds this out when she goes to his room and sees him drinking and dancing with the man and woman he introduced to her as his dad and mom. She berates him, and he tells her that everything else might be false but the fact about him loving her is true. The friends plead with her to accept his love, and she relents in exactly 30 seconds and proceeds to a massy duet.

Scene 2 - Two women, Kantham (Meena) and Priyamvada (Ramyakrishna), find out that they're married to the same man, Bhaktavatsalam Naidu (Mohan Babu), for the last 25 years, and that he's been cheating them in the name of business trips. They berate him and Balraju immediately gives him a sob story about how Naidu was forced to marry both of them and how he's been going through living hell for the last 25 years. He pleads with them to accept him, and they relent in exactly 30 seconds and proceed to get a family picture clicked.

Those two scenes must be enough for you to glean the depth this movie has in terms of script and storytelling. MMAK's script must also be pretty clear by this time - Naidu has two wives and both of them have no clue about it. His daughter falls in love with a wastrel and Naidu's opposed to the match, but the wastrel finds out about the wives and puts Naidu in a spot. How this tangle is resolved forms the rest of the movie.

From the perfunctory script to the perfunctory performances, MMAK is a terrible film. The humor is forced, the songs are terrible, the situations are beyond contrived, and the characters are dumber than dumb and dumber put together. Sreenivass Redde, the director, is clearly clueless. And the background music for this movie is so outdated, dinosaurs would recognize it.

Mohan Babu's children must have an axe to grind against him - why else would they make such a movie starring a man who has a stellar body of films to his name? Mohan Babu's performance in the film appears like he's mocking his own previous roles. The remaining actors seem to think they are in a Doordarshan serial in the '80s - and the levels of overacting are to be seen to be believed. 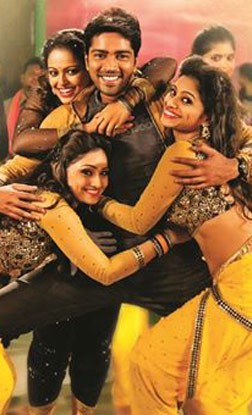 ADVERTISEMENT
This page was tagged for
mama Manchu Alludu Kanchu Telugu movie Download
mamamanchualludukanchutelumovies
www.manchu kureshy velalo full movie rulz.com
mama manchu alludu kanchu du full movie free download
mama manchu alludu kanchu movie download in movie rulZ
Follow @fullhyderabad
Follow fullhyd.com on
About Hyderabad
The Hyderabad Community
Improve fullhyd.com
More
Our Other Local Guides
Our other sites
© Copyright 1999-2009 LRR Technologies (Hyderabad), Pvt Ltd. All rights reserved. fullhyd, fullhyderabad, Welcome To The Neighbourhood are trademarks of LRR Technologies (Hyderabad) Pvt Ltd. The textual, graphic, audio and audiovisual material in this site is protected by copyright law. You may not copy, distribute, or use this material except as necessary for your personal, non-commercial use. Any trademarks are the properties of their respective owners. More on Hyderabad, India. Jobs in Hyderabad.