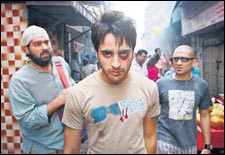 Nupur Barua / fullhyd.com
EDITOR RATING
8.0
Performances
Script
Music/Soundtrack
Visuals
9.0
9.0
8.0
8.0
Suggestions
Can watch again
Yes
Good for kids
No
Good for dates
Yes
Wait for OTT
No
With Dil Chahta Hai, Aamir Khan became a renewed youth icon in his mid-30s. As producer of Delhi Belly, he is all set to make his beloved nephew, Imran Khan, the new idol for the young masses of the country.

Now, for the first time in India, prepare for what seems to be a movie that deals with 'real adult humour' (with a stress on each word). Delhi Belly is a smart, witty, intelligent, quick-paced comedy, partly in Hindi and without an intermission. The 95-minute-long comic caper is just what the doctor ordered for the discerning, snobbish audience that has been whining about the quality of films in this country.

The no-nonsense Tashi (Imran Khan), the clueless but talented Arup (Vir Das), and the food-loving, diarrhoea-prone Nitin (Kunal Roy Kapoor) are sloppy roommates, who live in a lower middle-class neighbourhood in New Delhi. Tashi is a journalist, and Nitin is his photographer. Arup is a cartoonist at an ad agency.

Tashi has an air-hostess girlfriend, Sonia (Shehnaz Treasury), and before he can say 'DK Bose', he is engaged to be married within a month. Trouble begins when Sonia acts as a courier for an international smuggler. A little daft, she asks Tashi to deliver the package, who in turn gives it to Nitin, who passes it to Arup.

An innocent mix-up leads to situations so unbelievable that they can only be real. A racy and tight script by Akshat Verma leaves no time for the purist to find faults either in the story or its execution. Abhinay Deo does not hesitate to cross boundaries as he makes his actors swear, make out, defecate, and become so irreverent that you absolutely cannot watch this movie with your family. This is no 'clean' movie, but not once will you cringe at the lenient usage of the 'F' word, or even the Hindi profanities.

This is Imran's best performance till date. He seems far more at ease speaking in English with a bit of Hindi thrown in now and then, as an afterthought. Vir Das is splendid. The scenes where his character has to tolerate an irritating boss are the stuff that comedies should be made of. The man who steals the show is, however, Kunal Roy Kapoor, with his Delhi Belly, caused by a plate of Tandoori Chicken. He is definitely the Indian version of Zach Galifianakis.

Vijay Raaz as a Hindi-speaking criminal boss, along with his mean-looking, brainless goons, is suitably menacing, and it is a relief to see the actor getting his due. His comic timing is impeccable. Paresh Ganatra plays the sleazy landlord, whom Nitin is determined to blackmail, magnificently.

Then, there are the girls. Shehnaz is a convincing spoiled little rich bimbette. Poorna Jagannathan as the almost-divorced journalist, Menka, is a breath of fresh air. Finally, love interests are no longer either coy, demure Barbies or trying-to-be-cool, independent, aggressive bitches. Menka is the average city girl, not afraid to come on to a guy, and not too concerned with her looks either.

The production design is an entire character by itself in the movie, whether it is the boys' apartment or the shady hotel room where much of the climax takes place, or even the jeweller's shop. Despite the name of the movie, however, and the authentic setting, this could have been any city in India.

The much-hyped music of the movie is played mostly in the background, disappointingly. The only full-length music video is the one that Aamir Khan makes an appearance in, before the credits roll.

Delhi Belly is a guy's film, definitely, but that does not mean women will not enjoy it (there is something very therapeutic about watching men caught like deer in the headlights). You will be unable to wipe that grin off your face for a while after you leave the theatre.
Share. Save. Connect.
Tweet
DELHI BELLY SNAPSHOT

See Delhi Belly full details
TOP COMMENT
savyasachi on 1st Jul 2011, 9:06pm | Permalink
Its average, not reached expectations, nothing new, n all of the above songs r not added except one (i hate u like i love u).
One more thng: actually it was shooted in english n voice dubbed to hindi. Now u can assume hw d lip sink wud b.
Veredict: i dont suggest to go
My rating is: 2.5
3
0
DELHI BELLY USER REVIEWS
1 - 5 OF 5 COMMENTS
POSITIVE  |  NEGATIVE |  NEWEST  |  OLDEST  |  MOST HELPFUL  |  LEAST HELPFUL
USER RATING
5.8
6 USERS
Performances
Script
Music/Soundtrack
Visuals
6.0
4.8
6.0
5.8
Can watch again - No
Good for kids - No
Good for dates - Unsure
Wait for OTT - No
sumanth232 on 3rd Jun 2013, 11:49am | Permalink
Veru good movie, and a good review.. Though it is adult comedy, it is very entertaining.. not a dumb comedy at all like in rohit shetty movies. Had to give 10 to surge the ratings up
RATING
10
kk on 13th Jul 2011, 10:54am | Permalink
Bollywood at its lowest. This movie is a blot on Hindi films. Humor in this film is the best emetic from India. Lip sync is bad. In the name of real galli comedy Aamir produced a gutter film. Aamir if Taare Zameen par is zenith in your career then this is unfathomable trench.
Never thought Bollywood is suffering from lack of decent script and dialogue writers

ADVERTISEMENT
This page was tagged for
Delhi Belly hindi movie
Delhi Belly reviews
release date
Imran Khan, Aamir Khan
theatres list
Follow @fullhyderabad
Follow fullhyd.com on
About Hyderabad
The Hyderabad Community
Improve fullhyd.com
More
Our Other Local Guides
Our other sites
© Copyright 1999-2009 LRR Technologies (Hyderabad), Pvt Ltd. All rights reserved. fullhyd, fullhyderabad, Welcome To The Neighbourhood are trademarks of LRR Technologies (Hyderabad) Pvt Ltd. The textual, graphic, audio and audiovisual material in this site is protected by copyright law. You may not copy, distribute, or use this material except as necessary for your personal, non-commercial use. Any trademarks are the properties of their respective owners. More on Hyderabad, India. Jobs in Hyderabad.