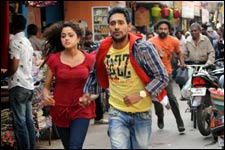 Harika Vankadara / fullhyd.com
EDITOR RATING
3.0
Performances
Script
Music/Soundtrack
Visuals
5.0
3.0
5.0
4.0
Suggestions
Can watch again
No
Good for kids
Yes
Good for dates
Yes
Wait to rent it
Yes
Manjeera Telugu Warriors Captain Venkatesh had, in early July, released the audio of Brahmi Gadi Katha prior to his team's game against Chennai Rhinos. Though released at a high profile event, the launch of the audio had failed to create any impact. This response may be indicative of the fate of the film, too.

Shiva's (Varun Sandesh) train journey to Hyderabad takes a turn, with the worry-etched face of a pretty woman, Maya (Asmita Sood), grabbing his attention. All his attempts at striking a conversation with the lady go in vain.

He satiates his curiosity regarding the mystery-shrouded damsel in distress, by examining a wedding card that refuses to flutter away even though precariously perched on a back-pack by a window of the moving freight-carrier. With all the wisdom of a youngster whose perspective on life is yet to be pruned by experience, the hero takes it upon himself to deliver Maya from her distress.

Maya, you learn, is a record-breaking athlete recuperating from the blows dealt by a diabolic, lusty sports official. She then races across the city in her bid to escape from the bunch of goons chasing her. And to prove himself a worthy match for her, Shiva flits the length and breadth of the city with her.

Meanwhile Shiva's uncle (Jayaprakash Reddy), his cousin Bhagya (Poonam Kaur) and his friend Pandu (Krishnudu) are awaiting his arrival at the station. Bhagya and her father insist that Shiva marry the former, but the protagonist is just as firm that he will not.

Enacting the role of a reluctant friend who finds himself smack in the middle of a misadventure, Krishnudu makes up for his disappointing act in his last flick, Vaikuntapaali - a film that was discarded by cinema halls in the blink of an eye.

"Prema kosam, premikula kosam, nenu chavadaniki aina padi mandhini champadaniki aina siddhame," declares Pandu's ringtone. Pandu himself, however, tells Shiva to drop his unrealistic endeavors right from his introductory frame, fearing his friend may fall in love with Maya. And his fears do turn out to be well-founded.

Bramhanandam brings to life a character inspired by Ali's role in Evadi Gola Vaadidhi. Acting as a sutradhar of sorts, Brahmanandam plays a director summoned by Shiva's uncle to narrate a screenplay, the filming of which the latter intends to fund. The uncle soon realizes that his director seems to be accurately predicting the currently-unfolding incidents involving his daughter and his nephew.

The rest of the film is predictable - Shiva thwarts numerous attempts by his uncle and the sports official to nab him and to kill Maya, respectively, and falls irrevocably in love with his lady in the process. However, as is a rule with Indian cinema in general, all ends well.

The movie's crew forces a gravelly broth down the throats of the Hyderabadi audience, insulting their knowledge of the city. Not only do the couple shrug off their assailants by running along dubiously wide streets of "Sultan Bazaar", but they also emerge from Secunderabad's Chennai Shopping Mall to find themselves in front of Charminar.

In what is a brownie point for the film, the casting is what supports a script that is as messy as a frog dissected by a fresher in a biology lab. Varun Sandesh, with his toned physique and disarming smile, woos the fairer sex, without eliciting any ill-will from the masculine one. Asmita convincingly portrays a woman buffeted by destiny. Poonam Kaur pales in comparison to the leading lady.
Ali enters the fray at the climax, and the purpose of his appearance in the proceedings will forever remain a mystery.

The director, Eswar Reddy, binds his audience to their seats by infusing into his film a healthy dose of humour, and by draping over it a flimsy cover of suspense. The rotund frame of Krishnudu is exploited to tickle the viewers, and Bramhanandam himself draws a few laughs - a noteworthy deed, considering his failure to do the same in quite a few recent films.

The lyricists have written songs that may make an appearance at singing-and-dancing reality shows. However, the background track that accompanies the narrative during the initial hour of the film has an effect similar to that of the scraping of fingernails against a blackboard.

Brahmi Gadi Katha is one of those films that will deliver a lukewarm performance at the box office, but will keep viewers on their couches on lazy Sunday mornings.
Share. Save. Connect.
Tweet
BRAHMI GADI KATHA SNAPSHOT

ADVERTISEMENT
This page was tagged for
bramhi adi katha
Badri gadi Katha
Brahmi Gadi Katha telugu movie
Brahmi Gadi Katha reviews
release date
Follow @fullhyderabad
Follow fullhyd.com on
About Hyderabad
The Hyderabad Community
Improve fullhyd.com
More
Our Other Local Guides
Our other sites
© Copyright 1999-2009 LRR Technologies (Hyderabad), Pvt Ltd. All rights reserved. fullhyd, fullhyderabad, Welcome To The Neighbourhood are trademarks of LRR Technologies (Hyderabad) Pvt Ltd. The textual, graphic, audio and audiovisual material in this site is protected by copyright law. You may not copy, distribute, or use this material except as necessary for your personal, non-commercial use. Any trademarks are the properties of their respective owners. More on Hyderabad, India. Jobs in Hyderabad.