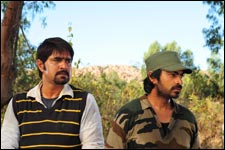 Deepa Garimella / fullhyd.com
EDITOR RATING
6.0
Performances
Script
Music/Soundtrack
Visuals
8.0
7.0
7.5
5.0
Suggestions
Can watch again
No
Good for kids
No
Good for dates
No
Wait to rent it
Yes
It is tough to spell out subtext where there is none immediately apparent. And to be able to see reason in the face of raging wild passions - without offending anyone in the process.

Virodhi, a film about Naxalism, is a well-reasoned portrayal of the struggle of the reds, and the multiple implications it has on the people taking part in the armed revolution. And above all, it is something that viplavam movies cannot be - gentle.

Gogi (Ajay) is the local hot-blooded rising star of the Naxalite movement, who commands a squad of his own. After a sensational shoot-out in the city, the dalam escapes, having kidnapped a journalist, Jayadev (Srikanth).

The idealistic Jayadev, despite his daily newspaper-column crusades against corrupt politicians, now finds himself at the mercy of the Naxal's gun. Gogi thinks he should be killed, since he believes Jayadev is not a sympathizer to their cause.

Jayadev, who is now witness to the inside workings of the squad, senses a lack of conviction among a few of its members. One is a young man who's quite rattled by his first "murder", and another is a woman who's in the movement merely because she thinks this will make up for the atrocities she and her family faced during a failed love affair with an upper-caste guy. There's also Gogi's pregnant lover, who is being forced, by Gogi, to abort her 3rd pregnancy.

Jayadev's concern and hard-hitting questions unleash in these young Naxals a bold wave of emotion and rationale, and a hope for an alternative future - a future that is not a dead-end career in killing and hiding.

These changes in his troops' emotional make-up don't go down well with the power-hungry Gogi, who thinks Jayadev is "playing politics" with his dalam.

Virodhi is a movie with focus, and sticks to its prose without resorting to songs (save for 2 brilliant folk numbers, one of them woven into a particularly heart-rending scene) or comedy. There's some violence, but that doesn't take away the fact that this is basically an emotional film. There are several poignant nuances uncovered at various steps in Neelakantha's journey to the centre of a Naxalite's heart.

With its micro-level look at the armed struggle, Virodhi doesn't judge either side of the Naxalism debate. What it does successfully convey is the fact that not everyone understands the ideology behind the movement or the goals it was born for.

Gogi is a good leader, but a greedy one, and in his quest for Naxal-stardom among the zillions of dalams in the movement, he is like any ordinary corporate honcho who seeks to outdo his competitors. He, then, is shown as an example of the typical bad egg in the red struggle, as opposed to the scholar-like gentlemen who are portrayed as having genuine interests.

Also, while the film tells us how each Naxalite in Gogi's dalam did have a genuine reason for joining the cadre, it also shows you the flaws in the self-righteousness of these exploited people - victims who can choose to not be violent.

The film's defects include some unrealistic political drama on the sidelines, and the amateurish stagey way it sometimes plays out. Gogi's power struggle seems a bit overdrawn. Jayadev should have had a larger role to play in the proceedings. An unfulfilled conclusion, too, mars the mood.

Ajay walks away with the meatiest role in his career yet, and with impressive ease. This is mostly Ajay's film, and the man can now boast of a section in his CV that does not consist of "villain's henchman". Kamal Kamaraju has a few powerful moments as well.

Srikanth's role as Jayadev is the outsider's voice of reason in the movie, and the actor has little to do except look troubled and mouth some heavy-duty lines. He's not really the face of the flick as much as the rest of cast playing the Naxalites together are. But boy, is he a pleasant picture of composure and dignity. Komolinee Mukherjee has nothing to do in the flick as Jayadev's wife, except look pretty.

R P Patnaik's folk songs are a huge asset to Virodhi, and so is his haunting background score. The visuals aren't very impressive, but neither do they take away from the film what it has going for it.

Virodhi isn't the most fantastic film you've ever watched, nor is it likely to taste box-office success. Still, its conviction and calm debate are the reason it deserves a watch.
Share. Save. Connect.
Tweet
VIRODHI SNAPSHOT

See Virodhi full details
VIRODHI USER REVIEWS
1 - 1 OF 1 COMMENTS
POSITIVE  |  NEGATIVE |  NEWEST  |  OLDEST  |  MOST HELPFUL  |  LEAST HELPFUL
Vishal on 2nd Jul 2011, 8:47am | Permalink
Virodi is like seeing more than what we read in news papers. the life around us which we are indifferent to. human emotions are very well studied and heart touching.the action sequences are natural. the protogonist reacts just like any common man would do in that situation.As you are watching the film you see only the characters . One of the rare films you get to see these days.one suggestion is dont see the film comparing it with regular film...like comedy, entertainment, romance.
The experience is very new,very emotional for a telugu film.

ADVERTISEMENT
This page was tagged for
Virodhi telugu movie
Virodhi reviews
release date
Srikanth, Ajay
theatres list
Follow @fullhyderabad
Follow fullhyd.com on
About Hyderabad
The Hyderabad Community
Improve fullhyd.com
More
Our Other Local Guides
Our other sites
© Copyright 1999-2009 LRR Technologies (Hyderabad), Pvt Ltd. All rights reserved. fullhyd, fullhyderabad, Welcome To The Neighbourhood are trademarks of LRR Technologies (Hyderabad) Pvt Ltd. The textual, graphic, audio and audiovisual material in this site is protected by copyright law. You may not copy, distribute, or use this material except as necessary for your personal, non-commercial use. Any trademarks are the properties of their respective owners. More on Hyderabad, India. Jobs in Hyderabad.