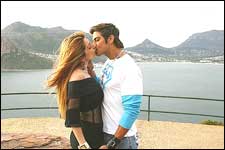 M Ali / fullhyd.com
EDITOR RATING
3.0
Performances
Script
Music/Soundtrack
Visuals
NA
NA
NA
NA
Suggestions
Can watch again
NA
Good for kids
NA
Good for dates
NA
Wait for OTT
NA
Double Cross - Ek Dhoka is a movie the likes of which stars do once in a while, when they need desperate money to pay off alimony or electricity bills. And which are, at best, watched by frustrated middle-aged men, and jobless reviewers.

The film is the story of Sahil (Sahil Khan), who works full-time as a gigolo while moonlighting as a hen-pecked husband to Sonia (Ayesha Jhulka). Sonia uses her handsome hubby to his maximum potential, which is, we later find, 5 women per day.

During his work-breaks Sahil hangs out with other men in business, sports the official getup of a gigolo (which includes wearing turkey hairdo and striped pants), and exchanges notes about the latest condoms and their performances. Too much display of his flesh is still not enough. So he quickly falls in love with Nigar (Nigar Khan), who readily shows more skin if less flesh.

When Nigar is accosted by a bar patron, Sahil sees red. How dare the flabby, drooling SOB solicit sex with Nigar, when Sahil himself is available, and at an attractive discount for men? That hurts Sahil's gigolo ego so much that he extracts a promise from Nigar - she will never let anyone pay for her services more than what Sahil earns.

With Sahil spending time doing it for free for Nigar, the business graph plummets, hitting Sonia where it hurts most - her tongue. She lashes out at Nigar, her non-stop invectives hitting you more than the Norwegian hollow-cheeked dame. The impasse ends when the duo strike a deal - Nigar keeps his heart, while Sonia reserves the right to use other, more useful parts of Sahil.

In the meanwhile, Sahil is contemplating his next business assignment, a rubberless and fruitful meeting with 5 members of the opposite sex. He shudders to think of the possibilities - HIV, syphilis, police raid, but most probable, a cardiac arrest during the course of the night. But luckily for Sahil, the crew, the cast and the audience, Sonia is killed, raped, and shot at twice, all in that order, to make sure she is actually not talking again.

Double Cross then has both Sahil and Nigar claiming the honor of silencing the cacophonic Sonia, which enrages the real killer into making an appearance and saving the pair.

There is no point in asking ourselves whether there will be more flicks comparable to Double Cross in terms of direction (or misdirection), dialogues (S, G, F words), costumes (or the lack of them), and music (tracks from older movies). The moot point is why Ayesha Jhulka, and why Sahil Khan.

She reigned with Jo Jeeta Wohi Sikandar, did a stint in Mithun's parallel-cinema-for-the-poor (Dalaal), and settled down with a construction tycoon. Ruling out money, it's difficult to assess her rationale for being in this flick.

Sahil was the new Khan rising over the horizon. With Style doing excellently, and its sequel, Excuse Me, doing good, Sahil Khan's career was heading towards brighter things in life. That's when catastrophe fell. Not only did he marry Nigar Khan, but decided to partner her on screen.

With Nigar's topless picks doing the rounds, Sahil fled into the divorce mode. According to him, nudity is not a part of our culture, but if a woman manages to keep a few post-its in the right places, it makes commendable cinema. Precisely the reason why Double Cross could get a release in mainstream theaters.
Share. Save. Connect.
Tweet
DOUBLE CROSS SNAPSHOT

ADVERTISEMENT
This page was tagged for
Sahil Khan Ayesha Jhulka
Double Cross hindi movie
Double Cross reviews
release date
Ayesha Jhulka, Sahil Khan
Follow @fullhyderabad
Follow fullhyd.com on
About Hyderabad
The Hyderabad Community
Improve fullhyd.com
More
Our Other Local Guides
Our other sites
© Copyright 1999-2009 LRR Technologies (Hyderabad), Pvt Ltd. All rights reserved. fullhyd, fullhyderabad, Welcome To The Neighbourhood are trademarks of LRR Technologies (Hyderabad) Pvt Ltd. The textual, graphic, audio and audiovisual material in this site is protected by copyright law. You may not copy, distribute, or use this material except as necessary for your personal, non-commercial use. Any trademarks are the properties of their respective owners. More on Hyderabad, India. Jobs in Hyderabad.