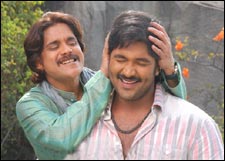 EDITOR RATING
5.0
Performances
Script
Music/Soundtrack
Visuals
NA
NA
NA
NA
Suggestions
Can watch again
NA
Good for kids
NA
Good for dates
NA
Wait for OTT
NA
We are okay with the wardrobe part. Actually, we are thrilled. That someone is exercising some independent thought - why, indeed, should Lord Krishna come dressed in a dhoti and rich jewelry today instead of a Manish Malhotra ensemble?

Alas, that's where the depth ends in Krishnarjuna.

That's a genuine alas. What the nature of God is, no one really knows, or at least can prove -everything is a story that apparently happened eons before we were born and that we can never verify if really happened or was concocted by well-meaning and intelligent humans for the global good. Which is what then makes showcasing God coming to this world and living with us, one of the most creative exercises for a story-teller.

Krishnarjuna makes Him merely someone who endorses with gusto, beating up the bad guys as the solution to badness. And, more importantly, stops there.

That should not be a judgemental sentence. The only question should be, do you enjoy watching that. And the answer is, what we want to see God as depends on our own level of maturity and evolution. And the makers of this one work with the opinion of you that if God appeared in front of you, you'd ask him for superhuman physical prowess, confidence and babes. And if you are finding nothing wrong with that, maybe they know better about their audiences than the holier-than-thou writers at fullhyd.com.

Unfortunately, they've still screwed it up - for, even given that, this is a sad movie. So let's get the story out of the way first. Arjuna (Vishnu) is a duffer who's continuously abused by his rich master (Nasser) and the latter's vain daughter Satya (Mamta Mohandas). However, he is a huge devotee of Lord Krishna, and when his doting grandmother (Manorama) dies unable to take a huge injustice meted out to him, and he himself is about to kill himself then in agony, the Lord enters the world in physical form (Nagarjuna clad in designer wear), introduces Himself to his humble subject, and, giving him a hi-five, tells him to take on the bad guys.

Completely movie material, and should work perfectly. No thanks to them, then, for making it so slow in the first half and so insipid in the second.

Bad screenplay is however the smaller of the problems if you think of what may have been with the material it had to work with. Krishnarjuna stays determinedly in the fantasy realm when it could easily entered the spiritual while still connecting brilliantly with every viewer. Was Guide a hit merely because of the songs and Dev Anand? Listen, we have it in us to think beyond our priorities. We all have a hundred questions to ask of Krishna, and most of them are the ones that pop up whenever we see a poor beggar trying to curl up in a tattered rug on a pavement on a cold winter night, or a dear one suffering extreme physical agony, or a terrorist bombing a civilian setting screaming God's name, or, of course, corrupt and ruthless people getting richer and richer while good and self-sacrificing people spend entire lifetimes suffering.

And lest we forget, that most important question of all we want to ask God - what did I do to deserve this?

Krishnarjuna steers clear of anything deep - and it looks incapability rather than design. It is the tragedy of Bruce Almighty (from which, incidentally, Krishnarjuna borrows some scenes and concepts), which could have been one of the most evolved films ever made, and instead stuck to Bruce staying pretty much Bruce, merely losing one more challenge. Unfortunately, Krishnarjuna makes even Bruce Almighty look deep.

For it takes the Being with the most character, and renders Him utterly characterless, save for mouthing some standard clichés about you alone being responsible for your destiny, and the soul being eternal. We at fullhyd.com do not know The Truth (whatever that is), but we do know that if there is a God, he'd have more interesting lines to say, and that everything would tie up. Using Krishna in person to help a loser (factually, not derogatorily) beat up the baddies and win his girl is perhaps a scripting sin you'll have to pay in your next lifetime for.

Sure, it's easy to say that God should be used to deliver a message of love and forgiving, and perhaps detachment. And that the script would have been much more laudable had it shown Krishna taking Arjuna down a path where he transforms the baddies through his own goodness and sacrifice, and thus evolves into God himself. But that is still just a human, unbacked opinion of God. But somehow, using Krishna to give supernatural powers to gain base human ends seems too cheap. And let's not start off now on who defines what is base.

There is a small exchange in the end between Krishna and Arjuna that shows some capability to have made this a brilliant movie. Alas, it must have been some producer overriding a director on the definition of "mass", or worse, merely what just any Hindu who's heard the Gita accidentally somewhere can spout.

Vishnu looks just as gauche, and you can pass off a build like that only if you are a brilliant actor. Unfortunately, nowhere there yet. Nagarjuna has pretty frugal screentime, which was a bad decision both script-wise and commercially. And he laughs out loud too much for our common stereotype of Krishna. If you fall in love with this particular depiction, it's because you are just too starved for a vision.

There are some sad jokes like Krishna trying to lose weight, and some thoughtless scenes like Arjuna asking Krishna how he entered the temple without the former seeing Him enter, after spending half a movie with Him by then. Yes, not the tightest of scripts.

Mamta Mohandas is used almost exclusively as a sex object - an arrogant woman who gets tamed by a suitable dose of testestorone, and sheds clothes for happiness. Mohan Babu has a role that seems to have been shoehorned in.

The duets are too raunchy, and there are too many jokes full of sexual innuendos - God must have personally intervened to get this a U rating. And that's the best He can perhaps do for this.

Krishnarjuna is sheer what-might-have-been, and there must be better ways to see God.
Share. Save. Connect.
Tweet
KRISHNARJUNA SNAPSHOT

See Krishnarjuna full details
KRISHNARJUNA USER REVIEWS
1 - 6 OF 6 COMMENTS
POSITIVE  |  NEGATIVE |  NEWEST  |  OLDEST  |  MOST HELPFUL  |  LEAST HELPFUL
USER RATING
4.3
59 USERS
Performances
Script
Music/Soundtrack
Visuals
NA
NA
NA
NA
Can watch again - NA
Good for kids - NA
Good for dates - NA
Wait for OTT - NA
Satish Satish on 6th Feb 2008, 4:58pm | Permalink
I will comment on one or two paragraphs from the review per day. That way, I do not have to spend a lot of time at once and it will give you guys a chance to actually look at my comments and see whether or not they make sense.

Original Review - "We are okay with the wardrobe part. Actually, we are thrilled."
[Comments by SS] -- Not the best usage of 'Actually', even if technically correct. 'Actually' is used to suggest something unexpected (or something that is a fact). Here, the writer simply has a change of heart. While the writer may not have expected that sudden change of heart, we do not have to be told about that. Simply stating that the writer (or writing team) is thrilled by the wardrobe would have done it. If the writer feels so compelled to write out his thought process, he or she should try something more descriptive like 'We are okay with the wardrobe. On second thoughts, let us change that opinion and say that we are actually thrilled with the wardrobe.'

And oh - there is no need for 'part' in the phrase 'wardrobe part'. It is redundant and incorrect.

Original Review - "That someone is exercising some independent thought

The idea behind criticizing a piece of writing is for the author to act upon it and improve. Trying to criticize the critic doesn't has no positive value. I wouldn't really criticize a particular piece of writing if it were, say, a private blog -- unless invited to. However, this particular piece of review is on a website that aspires to be a professional site. And, I was only trying to help that cause. Yes, I realize english in India has a long way to go. It would help the writer, the website and the audience a great deal if the writer pauses for few seconds to reflect upon their piece of work and have somebody competent review it.

Anyway, I will comment, in detail, on the review and then, perhaps, you will see why I felt compelled to submit the comments that I did. Besides, I am not making any claims that my english is good -- just that the review was written so poorly that it hurt my sense of language and communication, in general, and could use some improvement.

I haven't watched the movie yet.

ADVERTISEMENT
This page was tagged for
Krishnarjuna you dam full movie Telugu
Krishnarjuna you dumb Telugu full movie
Krishnarjuna telugu movie
Krishnarjuna reviews
release date
Follow @fullhyderabad
Follow fullhyd.com on
About Hyderabad
The Hyderabad Community
Improve fullhyd.com
More
Our Other Local Guides
Our other sites
© Copyright 1999-2009 LRR Technologies (Hyderabad), Pvt Ltd. All rights reserved. fullhyd, fullhyderabad, Welcome To The Neighbourhood are trademarks of LRR Technologies (Hyderabad) Pvt Ltd. The textual, graphic, audio and audiovisual material in this site is protected by copyright law. You may not copy, distribute, or use this material except as necessary for your personal, non-commercial use. Any trademarks are the properties of their respective owners. More on Hyderabad, India. Jobs in Hyderabad.