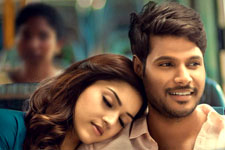 T J Reddy / fullhyd.com
EDITOR RATING
4.0
Performances
Script
Music/Soundtrack
Visuals
4.0
4.0
5.0
5.0
Suggestions
Can watch again
No
Good for kids
No
Good for dates
No
Wait for OTT
Yes
While the writers of fullhyd.com have the hard-working editors to thank for making their writing look presentable, director Suseenthiran seemingly has no such force helping his latest foray into writing/directing truly succeed.

Earning accolades while busting into mainstream consciousness with the extremely watchable Naan Mahaan Alla (Naa Peru Shiva), Suseenthiran found himself a winning formula to reuse in almost every other film that succeeded the former. In C/o Surya, too, he finds a carefree young man with a blue-collar job, a friend / group of friends he loves and is loved by, a family he has friction with but ultimately protects, a romantic interest that plays no role in the second half (Mehreen Pirzada), one truly enjoyable song, and all these elements intersecting with a local gangster who the director needs so desperately to be a psychopath but who is so painfully not.

However, while the statement "if it ain't broke don't fix it" holds water in most other aspects of life, in art, familiarity breeds contempt.

Surya (Sundeep Kishan) and Mahesh (Vikranth) are the two best friends in a gang of five. They eat together, work together, drink together, and probably use the same clothes, too. They also have a unique style of tag-team fighting - Surya uses his patented bear hug-screaming combo whereas Mahesh is adept at using a plank of wood to beat fools down. It's crude yet effective, and the movie takes multiple stabs at reminding you of their skills. In between all this lack of conflict, we are made privy to the fact that Mahesh and Surya's sister Anu (Sathiga) are busy getting cosy with each other unknown to Surya.

With this blossoming love story, a sub-plot that involves Janani (Mehreen) copying in an exam and a comedy track that features a man trying to jump off a phone tower, our main characters intersect with Samba Sivudu (Harish Uttaman), a villainy villain who does villainy things. And Surya has the unenviable task of figuring out what the villain wants to do with his family and circle of friends while trying to thwart his evil advances.

Did you have a sense of déjà vu while reading all that? If you did, congratulations - you are adequately prepared to enjoy C/o Surya. This is a film that throws many cinematic tropes into a blender and serves you the bland and brand safe product that settles as the residue.

Similar to a seasoned audience member predicting every turn of a Puri Jagannadh film, this need to stick to formula that hampers the enjoyability of many a modern director's films plays spoilsport with this one, too. C/o Surya's methodical first half (while slightly boring) creates a wee bit of suspense and tension, but that quickly evaporates with the hole-riddled, convenient writing of the second half. The second half is actually more exciting than the first, yet the plot progression, telegraphed "twists", the overall feeling of been-there-done-that and the omission of characters and common sense is appalling. I could spend an inordinate amount of time listing the many plot problems, but I'll spare you.

Anchoring this reckless abandon is lead actor Sundeep Kishan. That young lad who made his name as the complex bad seed of a political dynasty in Prasthanam has matured into an actor worth the public's time and attention. I highly recommend one of his previous films Nagaram to any reader unaware of it.

The one shining light in this meandering tale is a song warning men about the dangers of misogyny, assigned to Samba Sivudu. There is a genuine sense of terror those notes have to them, and they could have had a striking impact if associated with a much more well-rounded character. Accompanying this compelling music is a style of oversaturated filmmaking that Tamil directors use extensively. The shots are uncomfortably tight, with a colour palette that screams of ominous doom.

And the main talking point rears its ugly head yet again. The movies this one cannibalises in order to put itself out there are too mainstream to ignore and hence this film falls into a long line of projects which are a copy of a copy of a copy. While the film is ultimately watchable, there are many other better films you'd rather be spending your money and time on.
Share. Save. Connect.
Tweet
C/O SURYA SNAPSHOT 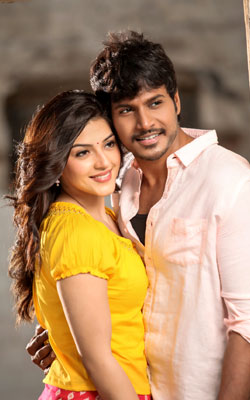 ADVERTISEMENT
This page was tagged for
c/0 surya review fullhyd
C/o Surya telugu movie
C/o Surya reviews
release date
Sundeep Kishan, Mehreen Pirzada
Follow @fullhyderabad
Follow fullhyd.com on
About Hyderabad
The Hyderabad Community
Improve fullhyd.com
More
Our Other Local Guides
Our other sites
© Copyright 1999-2009 LRR Technologies (Hyderabad), Pvt Ltd. All rights reserved. fullhyd, fullhyderabad, Welcome To The Neighbourhood are trademarks of LRR Technologies (Hyderabad) Pvt Ltd. The textual, graphic, audio and audiovisual material in this site is protected by copyright law. You may not copy, distribute, or use this material except as necessary for your personal, non-commercial use. Any trademarks are the properties of their respective owners. More on Hyderabad, India. Jobs in Hyderabad.