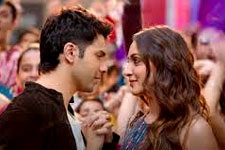 Punarvasu Pendse / fullhyd.com
EDITOR RATING
4.5
Performances
Script
Music/Soundtrack
Visuals
7.0
4.0
2.0
7.0
Suggestions
Can watch again
No
Good for kids
No
Good for dates
No
Wait for OTT
Yes
Jugjugg Jeeyo is the first movie yours truly has watched with his parents in the past decade, and boy, it was an interesting choice. Unfortunately, that was the only interesting thing in this whole experience.

Like in his previous film, Good Newwz, director Raj Mehta turns to the all-too-familiar Punjabi family - loud and fun-loving, but with secrets that threaten to disrupt everything.

Kuldeep "Kukoo" Saini (Varun Dhawan) and Nainaa Sharma Saini (Kiara Advani) are a couple whose happily-ever-after story is starting to show cracks after five years. Having left their hometown of Patiala for Canada for Nainaa's job, Kukoo is resentful and unhappy having to work as a bouncer. Nainaa feels unappreciated and tired, and the couple finally realise that they both want a divorce.

Nainaa and Kukoo agree to keep up appearances until the marriage of Kukoo's younger sister, Ginny (Prajakta Koli), for which the duo need to go back to Patiala. Little do they know what kind of surprises await them at home - and how the fates of not one but three marriages hang in the balance.

Post-marriage blues, as opposed to looking at marriage through rose-tinted eyes, is not something Bollywood is known for - especially exploring the relationship of "mummy-papa". Alas, you're not treated to anything path-breaking that would give you something to chew on, to reflect - you are only given a heavy-handed boisterous Punjabi family. As soon as the film tries to make a serious point, it derails its own plot by making light of the situation and passing it off as funny. Male infidelity - haha that is hilarious. Two drunk men dissing their wives - how very original and funny. Disrespecting the one woman who sticks to her ideals - lol we have to destroy her by video-calling her what a hoot.

What makes this worse is how the movie's narrative is bleak and grave when Kukoo and Nainaa's relationship is in frame, but everything is funny and silly when it comes to Bheem (Anil Kapoor) and Geeta (Neetu Kapoor).

Jugjugg Jeeyo balances its feminist ideas with some very carefully planned stereotyping and classic conservatism. Every time the script rightfully supports a wronged woman due to her husband's selfishness, it has to be balanced out by some asinine take on marriage being a compromise or the aforementioned comedy cop out. Not once does the movie call out the husband's infidelity for what it is - cheating and breaking the trust that was built over years of knowing each other. Even in this affair, the butt of the joke is made out to be the single and successful "other" woman who refuses to sacrifice her independence to be a glorified caretaker - until the film slyly moves the goalposts.

That's not to say Jugjugg Jeeyo does not bat for its female characters - it is just shamefully apologetic about it. And it is this balancing act that has the movie yo-yo everywhere, taking a "neither here nor there" stance until it reaches the expected happy ending.

Varun Dhawan and Kiara Advani are fantastic as an ailing couple who have forgotten their love for each other - they have an easy chemistry despite the lack of intimacy. Anil Kapoor steals the show with his incessant good humour, but the film tries to trick you into liking a horrible character with Kapoor's joie de vivre - very sneaky.

Neetu Kapoor is given a chance to shine only in the second half of the film, and shine she does - playing the role of a woman who lived for her family with quiet confidence. Newcomer Prajakta Koli has made the step-up from YouTube to the big screen effortlessly, though in a role that is not particularly memorable. Tisca Chopra and Manish Paul round out the cast, the latter tasked with the best comic lines of the film, and delivering on them.

Jugjugg Jeeyo is loud to the point of being atrocious, with John Stewart Eduri's background score constantly assaulting the eardrums. Please don't make the mistake we did, of watching this movie in a theatre with Dolby Atmos. The soundtrack has multiple contributors - Mithoon, Tanishk Bagchi, Kanishk Seth - Kavita Seth, Diesby, Pozy and Vishal Shelke - and is totally unremarkable.

Jugjugg Jeeyo tries to take the safe way out despite being based on a concept that isn't explored very often in Hindi cinema, and opts to try and make everyone happy. Once again, it is a case of what could have been. The only thing going for this one is the Dharma production values, and its ability to showcase its excellent cast front and centre. Oh, and carry earmuffs. 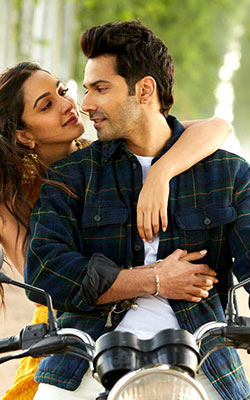 ADVERTISEMENT
This page was tagged for
Jugjugg Jeeyo hindi movie
Jugjugg Jeeyo reviews
release date
Varun Dhawan, Anil Kapoor
theatres list
Follow @fullhyderabad
Follow fullhyd.com on
About Hyderabad
The Hyderabad Community
Improve fullhyd.com
More
Our Other Local Guides
Our other sites
© Copyright 1999-2009 LRR Technologies (Hyderabad), Pvt Ltd. All rights reserved. fullhyd, fullhyderabad, Welcome To The Neighbourhood are trademarks of LRR Technologies (Hyderabad) Pvt Ltd. The textual, graphic, audio and audiovisual material in this site is protected by copyright law. You may not copy, distribute, or use this material except as necessary for your personal, non-commercial use. Any trademarks are the properties of their respective owners. More on Hyderabad, India. Jobs in Hyderabad.