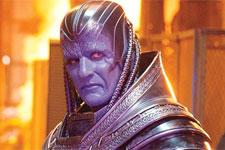 The bang-boom of Captain America: Civil War is still reverberating in a theatre close to you, and now another installment of the X-Men franchise by the indefatigable Bryan Singer is here to further pound your eardrums.

Since the writer Simon Kinberg hasn't really made the effort to imbue the primeval superhero trope with any originality, we'll lay it out for you nice and simple. The first mutant of the world wakes up from a nap many centuries long, decides to end the world, and the X-Men stop him. There, done.

To be fair, as a genre, very few among the recent crop of superhero films have dignified their plots with any semblance of freshness or uniqueness. However, the typical hyperbolic focus on the package and all its technicalities is admittedly well done in this film. The SFX, cinematography, editing, production and music are all top-notch. Still, the question that cannot be avoided any longer is - is that enough? More on that later.

Considering the simplistic storyline, the pace of this two-and-a-half-hour-long film will make you a little restless. The first half is entirely devoted to bringing you up to speed with the story arcs of Professor X (James McAvoy), Magneto (Michael Fassbender), Beast (Nicholas Hoult) and Mystique (Jennifer Lawrence) a few years after the events of X-Men: Days Of Future Past. In obvious and none-too-subtle preparation for the next trilogy, we are also introduced to the teenage Cyclops (Tye Sheridan), Phoenix (Sophie Turner) and Night Crawler (Kodi Smit-McPhee). On a parallel track, our villain Apocalypse (Oscar Isaac) is recruiting his Four Horsemen, namely Psylocke (Olivia Munn), Storm (Alexandra Shipp), Angel (Ben Hardy) and, of course, an old friend (no spoilers). The second half pits the two sides in a long-drawn and climactic confrontation, and no prizes for guessing who wins.

Count the number of names in the paragraph above, and consider the problem of the bloated ensemble that plagues current superhero films. When the interval rolls around, you'll wonder why the first half is so achingly slow because it isn't as if all that time has been devoted to establishing interesting characters or arcs. The first part is more of a roll call than anything else, and a roll call with one significant exclusion - Wolverine. Hugh Jackman makes a two-minute guest appearance, which had the entire hall erupting in cheers, but he was gone too soon, and with him, any hope of the film exhibiting some personality.

Quicksilver (Evan Peters) is the only character with coolth (right down to the love of the band Rush, the only '80s pop culture reference we approved of), and it's no coincidence that the standout action sequence of the film belongs to him, which succeeds because it's a combination of not just great special effects, but a quirky and interesting character. Smit-Mcphee, too, gives Night Crawler a likeable vulnerability, but the others fail to make an impact in a movie where every frame is over-crowded. They are just guys in tight suits grimacing and grunting in front of green screens.

Even veterans like MacAvoy and Fassbender are wasted. The Professor X and Magneto relationship trope has been thrown at us ad nauseum, and neither talented actor is given any fresh material to work with. The superficial emotional arc given to Magneto is lazy enough to use a beautiful wife and daughter, and a shattered idyllic existence in a village (including tame antelope, by the way). It doesn't get more trite than this. Oscar Isaac as Apocalypse is unrecognizable under the heavy and ugly prosthetics, and is unable to pull off even one percent of the spunk he showed in Star Wars: The Force Awakens. Menace? What's that? You just want to slap Apocalypse on the back of his bald head when he starts shouting generic threats to end the world for no good reason.

X-Men: Apocalypse's trump card is its CGI, and the way that all the other technical departments work to bolster its overall impact. Like we said earlier, the cinematography, music, editing and production values are great. After all, they have the might of the Disney (somewhere Mickey and Goofy are laughing at us) and Fox behemoths behind them. But even though the special effects are fantastic, they really won't take your breath away. Hollywood has reached an amazing level of expertise when it comes to SFX, and it wouldn't be wrong to presume that they will soon go further and break new ground. However, do they actually need to go back a page or two?

The capitulation to the demand for the big spectacle is fatiguing - it's almost as if the noise and the visual pyrotechnics conspire to numb you to the fact that these sequences, these characters, these plotlines - lack soul. The SFX spectacles are fatiguing and empty entertainment because there is no emotional groundwork anymore to make them truly meaningful or viscerally satisfying.

As of now, big studio Hollywood is raking in the millions with these movies that are husks coated in comic book primary colours. If you've had a rough week, and desire the anesthetization that such films specialize in, then X Men: Apocalypse will certainly give you bang for your buck. If not, head for the nearest comic book store instead. Those characters - mere drawings on the page - are more alive than their celluloid representations.
Share. Save. Connect.
Tweet
X-MEN: APOCALYPSE SNAPSHOT 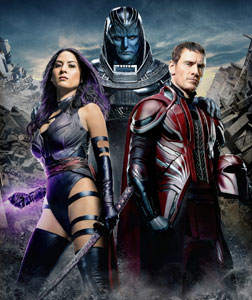 ADVERTISEMENT
This page was tagged for
X-Men: Apocalypse english movie
X-Men: Apocalypse reviews
release date
James McAvoy, Michael Fassbender
theatres list
Follow @fullhyderabad
Follow fullhyd.com on
About Hyderabad
The Hyderabad Community
Improve fullhyd.com
More
Our Other Local Guides
Our other sites
© Copyright 1999-2009 LRR Technologies (Hyderabad), Pvt Ltd. All rights reserved. fullhyd, fullhyderabad, Welcome To The Neighbourhood are trademarks of LRR Technologies (Hyderabad) Pvt Ltd. The textual, graphic, audio and audiovisual material in this site is protected by copyright law. You may not copy, distribute, or use this material except as necessary for your personal, non-commercial use. Any trademarks are the properties of their respective owners. More on Hyderabad, India. Jobs in Hyderabad.