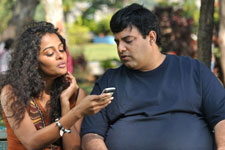 Deepa Garimella / fullhyd.com
EDITOR RATING
1.0
Performances
Script
Music/Soundtrack
Visuals
5.0
1.0
2.0
4.0
Suggestions
Can watch again
No
Good for kids
No
Good for dates
No
Wait for OTT
No
If you have noticed, the recent flood of "youth-centric" movies in Telugu, centred around the much condemned "chatting-dating culture" of the new generation, are unleashing among audiences a forbidden three-lettered word that starts with "S", i. e., SOS.

Mr. Manmadha, however, is not the kind of film that makes you cry out for help randomly. It is more likely to make you cry out for specific people - your family cardiologist, the security guards, your mom, the DCP that your uncle's friend's brother-in-law is friends with, the bouncers you recently befriended, and so on.

Meanwhile, we're guessing that the sin of trying to mislead audiences with innocuous-looking posters featuring the lead pair from the hit rom-com Vinayakudu will catch up with the makers pretty soon.

Mr. Manmadha is basically about the foundation of healthy and successful marriages and relationships, nay, the foundation of human civilization - sex. In this story, a highly regular guy Madan (Krishnudu), is shown seeking what other highly regular guys of his age seek - sex. His friends convince him that doing it once before he gets married will give him THE license to matrimony.

So he has several misadventures, that involve hookers, pimps and even an attempt to sell his own flesh to middle-aged overweight women; but ultimately, ends up all bruised and demoralized, but not having slept with anyone.

Meanwhile, he gets married to this really sweet girl, and looks forward to finally getting some action. Only, she's not the brightest bulb in the box, and is the kind who has no clue about what is done on the legendary "first night". Heck, she doesn't even know how babies are made. Okay, we were kidding. Actually, she doesn't know how babies are born.

Then there is your hot girl-next-door Sonia (Sonia) who every man wants but who is out of everyone's league. Sonia unabashedly picks men based on how rich they are, and callously changes her boyfriends faster than you can Google the phrase "how to kill your neighbour".

Eventually, Sonia gets married to a rich guy, and ends up in the same apartment complex as Mr. and Mrs. Madan. The complex has a very nosy secretary (Jeeva) who keeps tabs on how many times Madan visits Sonia (don't ask). However, on the other hand, it is a very broad-minded community. For example, they have elaborate functions to welcome new entrants to the complex, in which they organize kissing games for the adults (we asked you not to ask).

Another track shows a couple of youngsters who meet over Facebook through their anonymous Facebook accounts (Veera Shivaji and Jhansi Ki Rani, respectively). Their online affair steams up quite a bit, and they start talking dirty to each other, which is when they decide to meet and do the dirty together in person. This leads to a twist that will shock you and nauseate you, if you're still around, that is.

The sex-starved Madan now wants to lay his hands on Sonia, who is being all cool and chummy and resting-elbow-on-his-shoulder-and-showing-him-her-childhood-photos kind of friendly with him.

Now, Sonia is in for a rude revelation. Her husband is gay. Gay in the wears-saree-bindi-anklets-bangles-but-does-not-shave-stubble kind of way. Every night, he decks up whenever she goes to work (she has a night shift), and waits for his "lover" called "Jockey", and jumps at him and climbs up on him the moment he enters the door. No kidding. The sight causes Sonia to gag. Mainly because the saree and underwear he's wearing are hers.

She and Madan become BFFs. But Madan still does not get lucky. What happens next? Do Sonia and Madan elope? Will Madan's wife grow up? Will you get over this film?

Mr. Manmadha tries to be a sex comedy, but ends up being as crude as they come. The innuendos are a little too much to stomach, and since nothing other than references to sex gives this movie any semblance of substance, the film leaves a bad taste in your mouth. To top it all, all the characters are hare-brained.

In any case, we don't get the message. Other than the fact that sex is not all there is to a marriage. Why on earth was that thread with the teenagers' online romance even in the plot?

Melkote walks in with a stethoscope to execute as cliched a doc's role as ever. The girl who plays Madan's wife has nothing to do, but she displays some exuberance.

The music doesn't count. The visuals show that the film cost the makers less than a college degree would have.

Skip this one. There are tons of other ways you can be unproductive with your life, and none of them is nearly as fatal.
Share. Save. Connect.
Tweet
MR. MANMADHA SNAPSHOT 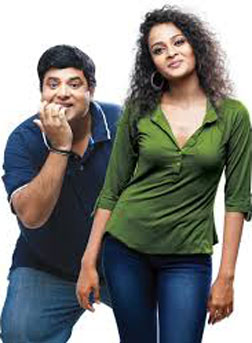 ADVERTISEMENT
This page was tagged for
Krishnudu telungu movie hot sex sceens
Mr. Manmadha telugu movie
Mr. Manmadha reviews
release date
Krishnudu, Sonia Deepti
Follow @fullhyderabad
Follow fullhyd.com on
About Hyderabad
The Hyderabad Community
Improve fullhyd.com
More
Our Other Local Guides
Our other sites
© Copyright 1999-2009 LRR Technologies (Hyderabad), Pvt Ltd. All rights reserved. fullhyd, fullhyderabad, Welcome To The Neighbourhood are trademarks of LRR Technologies (Hyderabad) Pvt Ltd. The textual, graphic, audio and audiovisual material in this site is protected by copyright law. You may not copy, distribute, or use this material except as necessary for your personal, non-commercial use. Any trademarks are the properties of their respective owners. More on Hyderabad, India. Jobs in Hyderabad.