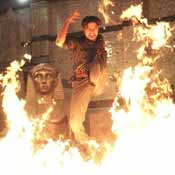 EDITOR RATING
6.0
Performances
Script
Music/Soundtrack
Visuals
NA
NA
NA
NA
Suggestions
Can watch again
NA
Good for kids
NA
Good for dates
NA
Wait for OTT
NA
Critics love to bash the 'popcorn' genre of all flash and no substance films. They did that unabashedly with 'The Mummy' two years ago, but audiences embraced the film making it a blockbuster worldwide. The critics haven't changed in this period, but the other part will. This film isn't going to set the cash counters ringing like its predecessor did, and for good reasons, too.

The elements that made the first film such a hoot - the character development, a well-structured story and the pacing - have gone out the window in this sequel. Instead, the film seems to be in a hurry to finish, the storytelling is sloppy and the gross overload of FX undermines the film. Sometimes even the special effects, the so-called USP, look unpolished and cartoon-ish. There are, of course, some great fight scenes, a few knock-your-socks-off effects and the talented cast. Yet, all in all, the charm and menace from the first film is lacking.

For those who joined in late, the first chapter was about how a bunch of archeologists led by Rick 'O Donnel (Fraser) and his girlfriend Evie (Weisz) get entangled in an adventure when they plan to unearth the legend of a mummy called Imhotep. Having pleased the audience with that, the sequel plans to be even more outlandish than the first, with an increasing dependence on special effects and everything else being shown the backseat. It is a classic case of a sequel that tries too hard.

The Mummy Returns takes place in 1933, ten years after the first film. Daring adventurers Rick (Fraser) and Evie (Weisz) are now married and the parents of a precocious eight-year-old son Alex (Boath). Despite the domesticity, the family is still exploring and unlocking the mysteries of the pharaohs. Evie in particular is drawn by visions to a specific tomb where they discover the mysterious "Bracelet of Anubis".

In an elaborate flashback narrative, we learn that in 3067 BC, a great warrior known as the Scorpion King (The Rock) was defeated in battle and left for dead in the desert. The King prays to the god of death, Anubis, and offers his soul in exchange for his life. Anubis grants the wish but damns the warrior to eternity in hell (or until he is awakened in 5,000 years). The bracelet is the trigger that, once donned, will set about the resurrection of the Scorpion King.

Elsewhere in the desert, another group of menacing excavators is working on the ruined site of Hamunaptra. Led by the creepy curator of the British Museum and a look-a-like for Im-Ho-Tep's lost love, Anck-Su-Namun (Patricia Arlequez), they are looking for the dangerous Book of the Dead (from the first film) and the remains of Im-Ho-Tep. We are never told how these dastardly archeologists got together - just that their plans are to raise the mummy once again, trigger the bracelet so the mummy can defeat the King, and rule the world.

Complications arise when Alex puts the bracelet on his own wrist, rendering it impossible to get off as well as starting the resurrection process. The evil goons follow the O' Connells to their home in London where they manage to kidnap the boy and reincarnate the mummy. With Im-Ho-Tep alive again and the boy in their possession, the evil band returns to Egypt following the path projected by the bracelet to find the Scorpion King's hidden oasis in the desert. Rick, Evie and her brother Jonathan (John Hannah) remain in close pursuit following Alex's breadcrumb trail and Evie's increasingly realistic visions.

The Mummy Returns moves at breakneck speed crashing its way through one action sequence after another towards the final climax. The story takes a back seat to flying dirigibles, marauding pygmies, four reincarnations, two desert wars, sexy female combat, killer walls of water and, not in the least, a major death. And that, unfortunately, restricts the audience to which this film will appeal.

The bright spot is the cast, which is excellent if underdeveloped. If you have seen The Mummy, you will realize that the transformation of Evie from a klutzy egghead to a brash, cleavage-baring, black-eyeliner-donned adventurer is evident. Brendan Fraser's Rick is still Mr. Adventure, but now tempered with a fierce protection for his family.

The Rock, the WWF star, gets about 10 minutes of actual screen time, and his performance consists entirely of bellowing and sneering at the camera. The rest of the villains are sadly toothless in this outing, but that's because of the presence of too many of them.

The Mummy Returns will please many that are looking for a mindless roller coaster ride with some familiar friends. The opportunities to build off the strengths of the first film have been wasted in this sequel. Director Stephen Sommers obviously decided to take the route most traveled by creating a "Temple of Doom" style knock-off, teeming with effects but light on character development. It's a pity considering the talent involved, but not unexpected in the blockbuster driven Hollywood of today.
Share. Save. Connect.
Tweet
THE MUMMY RETURNS (HINDI) SNAPSHOT

ADVERTISEMENT
This page was tagged for
The Mummy Return full movie in Hindi
the mummy returns watch full movie in hindi
the mummy returns in hindi free downloade
the mummy returns story in hindi
download the mummy 2001 full movie in hindi
Follow @fullhyderabad
Follow fullhyd.com on
About Hyderabad
The Hyderabad Community
Improve fullhyd.com
More
Our Other Local Guides
Our other sites
© Copyright 1999-2009 LRR Technologies (Hyderabad), Pvt Ltd. All rights reserved. fullhyd, fullhyderabad, Welcome To The Neighbourhood are trademarks of LRR Technologies (Hyderabad) Pvt Ltd. The textual, graphic, audio and audiovisual material in this site is protected by copyright law. You may not copy, distribute, or use this material except as necessary for your personal, non-commercial use. Any trademarks are the properties of their respective owners. More on Hyderabad, India. Jobs in Hyderabad.