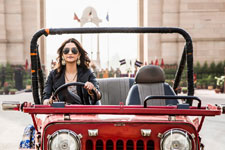 Nupur Barua / fullhyd.com
EDITOR RATING
5.0
Performances
Script
Music/Soundtrack
Visuals
6.0
4.0
5.0
6.0
Suggestions
Can watch again
No
Good for kids
No
Good for dates
Yes
Wait for OTT
No
In the excitement leading up to the release of Dolly Ki Doli, many have termed it a "runaway bride" movie. That is hardly an apt description for the character of Dolly. What she is, is a "looteri dulhan", as the movie points out, and there is a difference between the two phrases. You see, a runaway bride is somebody who is commitment-phobic, and the other is somebody who marries and loots her husband. With numerous examples of real live cases like these, Dolly Ki Doli has a relevant subject, and is almost believable in its narration. Almost.

Dolly (Sonam Kapoor) flirts with the rustic but affluent young Sonu Sarawat (Rajkummar Rao), and the besotted man now wants to marry her, if only to get her into his bed. After much drama with his father (Rajesh Sharma), the two marry, but Dolly refuses to consummate the relationship because she is on a wish-fulfilling fast, or so she says. The next morning, when the household comes to its senses, they realise that not only is the new daughter-in-law missing, they have also been wiped clean of whatever possessions they had in the house. Turns out that the house that Dolly's "family" occupied is now vacant, and all of them have vanished without a trace.

The truth of the matter is this - Dolly is a con-woman. She marries, and on the wedding night, drugs the entire household so that her colleagues can enter the house and strip it of all valuables. She is a part of a gang, led by Dubey (Manoj Joshi), who plays her father in these situations. The other important member of the gang is Raju (Mohammed Zeeshan Ayyub), who resents the fact that he has to always play Dolly's brother, since he is in love with her.

As the gang moves across the country, changing identities, origins and religions as required, the Delhi police pick up the case. A young officer, Robin Singh (Pulkit Samrat), heads the investigation, and later enlists the help of two conned husbands - Sonu, and the rather naïve Manjot Chhadha (Varun Sharma), whom Dolly had married in defiance of his mother (Archana Puran Singh), who had rejected her. The question then is not when the cops will catch up with the gang, but what they will do next. Also, Robin Singh seems to have his own agenda regarding Dolly, and the blushing bride (many times over) is oblivious to the fact that her life may soon be turned upside down.

The first half of the movie is peppy and fun. It is always a pleasure to laugh at somebody else's misfortunes and mock their stupidity, as this movie intends to. Of course, there are times when you wonder how it is possible for some men to be so gullible in this day and age, especially in cities such as Delhi. However, with the willing suspension of disbelief firmly in place, you laugh, and think that it serves these idiots right for being so taken in by a pretty face. What the script also does is make these men almost harmless and very malleable, but without the innocence that accompanies such traits - so, they are likeable enough, but you will not really feel sorry for them, especially when one has a lecherous father and the other has a dominating mother.

Sonu and Manjot are the main victims here of Dolly's con, so they dominate the movie. It would have been fun to meet a few more of the disillusioned, cheated men, but presumably for the sake of brevity, the script went with just two. While Sonu evolves into an intense lover who cannot get over Dolly, Manjot behaves like a spoilt child whose candy has been taken away.

What seems unreasonable is the fact that there is no visual record of the con woman, despite so many weddings. This hinders the case, in a way, but it seems impossible, in this day and age of social media and camera phones. It also explains why the gang of robbers walks around in public without fear of being caught or recognised. The absence of threat (of being identified) is somewhat unbelievable.

The biggest problem with the screenplay is Dolly's character. Her being the protagonist has no justification. While it is possible that some people rob and loot for the heck of it, the lack of direction in a protagonist's life may get the audience too detached from the person who they are supposed to sympathise with. Dolly does not evoke any emotion in the hearts of the viewer, and is therefore a rather flat, pointless character. The men have more to do, and more to lose, or gain. It seems incredible that all these men, with their various levels of intensity and intelligence, would be fascinated with a person like Dolly, who just smiles and does nothing else. Also, the movie is wrapped up very hurriedly, and the resolution is almost anti-climactic.

Most of the lacklustre aspects of the film are highlighted by Sonam's poor dialogue delivery. She speaks in a monotone, and seems awkward in the role. She does not provide much wit, intelligence or intensity as Dolly, and single-handedly brings down the humour in the film. The others, from Pulkit Samrat to Manoj Joshi, try their best to retain the comedy, but with Sonam Kapoor in almost every frame, it becomes difficult to concentrate on their efforts. The only two actors who light up the screen are Archana Puran Singh and Rajesh Sharma - their maturity as actors shines through, but they have very little screen time. Rajkummar Rao is always a pleasure to watch, of course, but Varun Sharma was better in his debut film, Fukrey.

The story sticks largely to the northern part of India, and the production design is appropriately authentic for the setting. The costumes lack panache, and the characters look uncomfortable in their clothes most of the time. Archana Puran Singh's kaftans are a nice touch, though. The camera work is average, and the music is almost forgettable. As for the editing, there is only so much one can do with a script like this, so it is pretty effective.

Dolly Ki Doli has an interesting premise, and is relevant as well, as mentioned above. In fact, it is not a tiring watch, but, as mentioned, Sonam Kapoor is a distraction with her uneasy dialogue delivery. Watch it for the humour between the two conned husbands and their families, but do not expect a great resolution to this tale of a con woman.
Share. Save. Connect.
Tweet
DOLLY KI DOLI SNAPSHOT 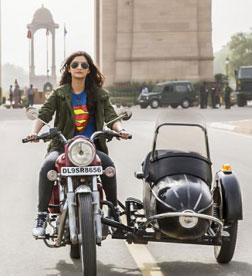 ADVERTISEMENT
This page was tagged for
little dolly ki new Brother movie
Dolly Ki Doli hindi movie
Dolly Ki Doli reviews
release date
Sonam Kapoor, Rajkummar Rao
Follow @fullhyderabad
Follow fullhyd.com on
About Hyderabad
The Hyderabad Community
Improve fullhyd.com
More
Our Other Local Guides
Our other sites
© Copyright 1999-2009 LRR Technologies (Hyderabad), Pvt Ltd. All rights reserved. fullhyd, fullhyderabad, Welcome To The Neighbourhood are trademarks of LRR Technologies (Hyderabad) Pvt Ltd. The textual, graphic, audio and audiovisual material in this site is protected by copyright law. You may not copy, distribute, or use this material except as necessary for your personal, non-commercial use. Any trademarks are the properties of their respective owners. More on Hyderabad, India. Jobs in Hyderabad.