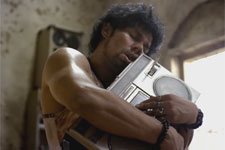 Josh / fullhyd.com
EDITOR RATING
6.5
Performances
Script
Music/Soundtrack
Visuals
8.0
7.0
6.0
6.0
Suggestions
Can watch again
Yes
Good for kids
No
Good for dates
Yes
Wait for OTT
No
We entered Laal Rang completely unprepared for the welcome jolt that it turned out to be. On some level, the film itself doesn't prepare you for the film. What we mean by that, we'll get to in a bit.

Shankar Malik (Randeep Hooda) runs an illegal blood bank mafia which steals blood (not always in hygenic conditions), stores it (often for durations longer than prescribed), and supplies as per demand. With his connections in Karnal he not just sustains his business, he runs it with efficiency that can be studied in B-schools. Shankar takes up a protégé Rajesh (Akshay Oberoi, who looks like Ayushman Khurana and Ranbir Kapoor had a love child) who admires every last thing about Shankar but is perhaps not as reliable as Shankar takes him to be.

Now, blood mafia is a serious issue. And Syed Ahmed Afzal (director) is alive to the gravitas of his premise. He develops and sustains a certain dark unsettling tone through the film. The cinematography and music, too, aid him in this. He takes that grim realistic approach which is commonly adopted to issue-based films and those based on true incidents. Indeed, we were expecting the film to end with one of those solemn slideshows with saddening statistics.

The kind of movies we're talking about are so ingrained in their setting that the setting becomes an integral part of the film (Laal Rang is set in Karnal and is as Haryanvi as it gets for a Hindi film). These films approach their respective grave issues with a sincerity that they just don't feel manipulative (as opposed to full-blown commercial cinema which has no qualms with churning emotions with such material). The films show great conviction in the depiction of their troublesome portions - the audiences flinch but the movie doesn't. And the films extract superb performances from the cast - everyone seems to Be the character, no one's acting.

Laal Rang does all of this. With conviction. Except, there is that surprise with the protagonist. The kind of films we were trying to slot Laal Rang into have protagonists who are ordinary (like Shah and Sarika in Parzania) or protagonists who are shaded with greys (even GOW, the most masala entrant in this niche, berths Sardar and Faizal Khan in the grey zone). However, Laal Rang's protagonist Shankar Mallik, as he is written and as Hooda plays him (wonderfully), is practically Rajnikant (or Salman Khan depending on which latitudes your childhood occurred on).

First he's good. People in his locality liken him to God. Then he gets better. His swagger causes ovaries to explode. Then he's more awesome. He can take on any opponent and even pull them into his friendship (one whistleworthy line goes "Hum pithayi mein bhi laad karte hain" - I pamper even while I punish). He just doesn't stop. Mallik escalates and escalates till he propels himself out of the realistic gray universe we were talking about. He has no anger issues, no insecurities, and loves his chelas like a true father. Somebody just hand him one of those World's Best Dad mugs already!

So you see, Laal Rang paints itself dark and gritty in tone but somehow manages to be a hero exhibit in intent. This distance between the tone and intent is a perplexing thing. For some it could be very putting off. For a few others it could be a bore. We felt it was interesting, though. Taxing but interesting. And that's more than you can say about most movies. Aren't we used to star exhibits which use issues as crutches to prop up their heroism?

Then, when there is a movie which uses the same two aspects but achieves a different balance between them, maybe it doesn't have to feel so bothersome. Really, who is to say what is the right balance?
Share. Save. Connect.
Tweet
LAAL RANG SNAPSHOT 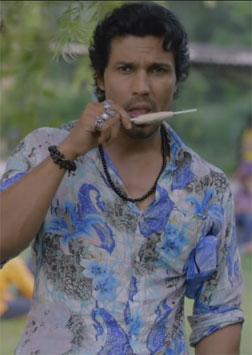 See Laal Rang full details
LAAL RANG USER REVIEWS
1 - 2 OF 2 COMMENTS
POSITIVE  |  NEGATIVE |  NEWEST  |  OLDEST  |  MOST HELPFUL  |  LEAST HELPFUL
Madhu on 24th Apr 2016, 10:16pm | Permalink
Just like we knew the Leonardo Dicaprio would win the Oscar although his acting was average, I am confident that the producer will be laughing all the way to the bank with this average product. There is another world out there who will not read these reviews or watch it in prasad's but will lap it up in single theaters.
JayZ on 23rd Apr 2016, 12:26pm | Permalink
Mr Josh....how i wanted you to write Sarainodu review..sigh!!! Mr Ravi is good but he was a bit too nice describing the film....you would have destroyed it...
Josh on 23rd Apr 2016, 12:55pm | Permalink
I'm not complaining :) At any rate, Ravi's reviews and views are on mainstream Telugu films are perhaps as good as they get.

If destruction is what you want, "Indeed, if Sarainodu had a shot of Allu Arjun beating up Boyapati Sreenu, this reviewer, for one, would've risen and pumped his fists in approval." takes the cake.

ADVERTISEMENT
This page was tagged for
Laal Rang hindi movie
Laal Rang reviews
release date
Randeep Hooda, Akshay Oberoi
theatres list
Follow @fullhyderabad
Follow fullhyd.com on
About Hyderabad
The Hyderabad Community
Improve fullhyd.com
More
Our Other Local Guides
Our other sites
© Copyright 1999-2009 LRR Technologies (Hyderabad), Pvt Ltd. All rights reserved. fullhyd, fullhyderabad, Welcome To The Neighbourhood are trademarks of LRR Technologies (Hyderabad) Pvt Ltd. The textual, graphic, audio and audiovisual material in this site is protected by copyright law. You may not copy, distribute, or use this material except as necessary for your personal, non-commercial use. Any trademarks are the properties of their respective owners. More on Hyderabad, India. Jobs in Hyderabad.