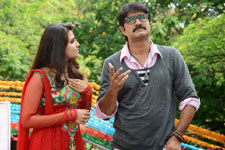 Ravi Kandala / fullhyd.com
EDITOR RATING
3.0
Performances
Script
Music/Soundtrack
Visuals
3.0
3.0
3.0
3.0
Suggestions
Can watch again
No
Good for kids
No
Good for dates
No
Wait to rent it
No
We always wonder what drives people to invest in films that they know will not likely recover the investment. Why someone would put their hard (or ill) earned money into the hands of someone else with full knowledge that they are not likely to see it again is a question that we would definitely like answered.

Take the case of any film starring Srikanth these days. The actor has had his run. He is now better off in multi-starrers playing the lovable side-kick or the devoted younger (?) brother. He does not have the fan following of superstars that his movies will draw in an opening no matter what. Still, our man had at least two releases in the last two months, and a muhurat of a new film. If we try hard enough, we might just be able to figure out what came first - the chicken or the egg - but I don't think we will ever know the motivation of these producers.

Coming to Malligadu Marriage Bureau, the film does not aim to do anything more than what countless other Telugu films have done so far. It has a simple story: a marriage bureau owner and his problems - both his own and those of his clients - and how he attempts to solve them.

Srikanth (Malli) owns a marriage bureau. He promises the heroine's (Manochitra) parents that he will get her married. Malli has two other clients, Bobby (Vennela Kishore), who is in love with a friend, and Chotu Bhai (Brahmanandam), a middle-aged comic goon, who needs to get married within a week.

Bobby's problem is that one of his friends cheats him and proposes to the girl he loves before he does. He now has the make the girl fall out of love with the friend and fall in love with him.

Chotu Bhai's problem is that the new ACP in town, Nayak (Posani Krishna Murali), will only spare his life if he's married and has a family. The heroine is completely against marriage, and refuses to get married.

Malli, meanwhile, has his own share of problems, and keeps visiting a man in the hospital (don't get any ideas, the man is his sister's fiancée). How all these threads reach their conclusion forms the crux of the movie.

Malligadu's basic problem lies in how absolutely predictable everything in the movie is. The characters are all broad stereotypes of the characters that the actors have played in other movies. They behave exactly as we expect them to. The direction is largely uninspired, with the director's sole aim being to wrap up the movie within his limited budget.

Malligadu also resolutely refuses to get into any kind of skin show or double entendre comedy, which is a good thing, but the front-benchers might not essentially agree with us. The producer gave the director a limited budget, which he spends judiciously and makes the film look decent. The music is of the loo-break variety.

Malligadu will be forgotten soon, and will surely become a staple on Gemini Movies, that re-runner of mediocre films. You can safely stay away.
Share. Save. Connect.
Tweet
MALLIGADU MARRIAGE BUREAU SNAPSHOT 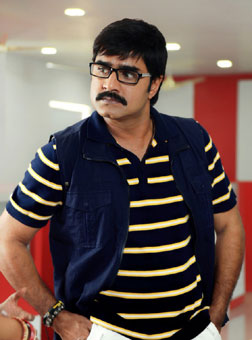 ADVERTISEMENT
This page was tagged for
marriage beaure movie budget
Malligadu Marriage Bureau telugu movie
Malligadu Marriage Bureau reviews
release date
Srikanth, Manochitra
Follow @fullhyderabad
Follow fullhyd.com on
About Hyderabad
The Hyderabad Community
Improve fullhyd.com
More
Our Other Local Guides
Our other sites
© Copyright 1999-2009 LRR Technologies (Hyderabad), Pvt Ltd. All rights reserved. fullhyd, fullhyderabad, Welcome To The Neighbourhood are trademarks of LRR Technologies (Hyderabad) Pvt Ltd. The textual, graphic, audio and audiovisual material in this site is protected by copyright law. You may not copy, distribute, or use this material except as necessary for your personal, non-commercial use. Any trademarks are the properties of their respective owners. More on Hyderabad, India. Jobs in Hyderabad.