The Woman In Black 2: Angel Of Death Review 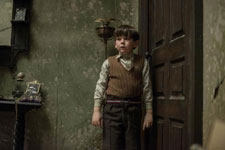 Nupur Barua / fullhyd.com
EDITOR RATING
5.0
Performances
Script
Music/Soundtrack
Visuals
7.0
5.0
6.0
8.0
Suggestions
Can watch again
Yes
Good for kids
No
Good for dates
Yes
Wait for OTT
Yes
Trivia - the theatre adaptation of Susan Hill's Gothic horror novella, The Woman in Black, holds the record for being the second-longest-running play in the history of the West End (the first being The Mousetrap). It is such a popular story that even with major plot and sequence changes, the 2012 movie, The Woman In Black, became a box office hit after its release. The title is now a brand, and any association with it is expected to have high standards.

A sequel to the movie was but an organically natural progression, and Susan Hill was the obvious choice to pen the story for the same. However, as we like to point out time and again by quoting the singer Sade, "It's never as good as the first time", and sadly, The Woman In Black 2: Angel Of Death falls short of expectations.

Not that it is all bad, though. After the events of the previous film, it is obvious that the Eel Marsh House at Crythin Grifford is not quite rid of its resident spirit, the Woman In Black. Her name is Jennet (Leanne Best), and the locals believe that whenever she appears, a child dies. Jennet's history, when she was alive, involved the tragic death of her illegitimate son. Distraught, she became a malevolent presence after her death.

It is now the period of World War II. A group of school children are evacuated from London and brought to Eel Marsh House for their safety. Accompanying them is their teacher, Eve (Phoebe Fox), and her colleague Jean (Helen McCrory). Eve is not too happy with the house, because it looks like it has never seen good days, but this is wartime, and beggars cannot be choosers. Eve and Jean try their best to make this dilapidated mansion habitable for the children and for themselves.

Once they are settled in, however, Eve realises that there is something not quite right with the place. Strange events confirm her suspicion, but Jean is not convinced. The latter is just grateful that they have a place to stay. Frustrated, Eve finds herself confiding more and more in the RAF bomber pilot, Harry (Jeremy Irvine), who is posted nearby. Both of them then try to uncover the secret of this house.

As Eve struggles to maintain her sanity for the sake of the children, she also forms a strong emotional bond with the orphan Edward (Oaklee Pendergrast). Unknown to her, this is the kind of mother-child relationship that Jennet's spirit abhors the most, and now they are both in danger. Will Harry, with his limited resources, and Eve, with her protective nature, be able to come out of this unscathed?

And it is not easy watching The Woman In Black 2. It is mostly scary, and sometimes your heart may just leap to your mouth. Setting a Gothic horror tale during World War II is admittedly novel. The story has a lot going for it, which is hardly surprising given that Susan Hill has written it. However, the screenplay is somewhat erratic. The intensity that is required for such a serious movie is missing. Relationships are glossed over, history is given a convenient twist, and the intentions of the evil spirit are never quite explained fully. Unless you know the mythology of Eel Marsh House, mostly from the first movie, you may be slightly confused about the pandemonium that the ghost creates in this film.

The dialogues in the movie are slightly superficial and predictable, thus killing whatever little empathy you may feel for the characters. The love angle is sweet, but more convenient than natural. Of course, wartime brings with it a lot of stress, and people do behave abnormally, but the sweetness in the romance may be a bit irritating. The adults in the movie all have responsibilities to their country and to the children, so the underlying flippancy in the tone of the relationships seems inappropriate, especially in the lack of verbal communication between Eve and Edward. The authenticity could have been more believable had the makers done away with the forced expressions and the offhand narration.

What makes the movie worth watching is the quality of the visuals. The production design team has taken a setting that we are already familiar with, and made it the protagonist of the story. The house has just the right degree of dereliction and eerieness. The sound, and sometimes the lack of it, adds to the creepiness, and the camera pampers your senses into believing that each visual trick is real. The creaking of the rocking chair, the sub-second glimpses of the creepy phantasm, the sudden appearance of a hand or an eye, and the unexpected flight of a bird - all these are perfect ingredients for a horror story that will have you covering your eyes in fright. The wide and barren expanse of land across which children walk and play is in itself a chilling sight.

The film is set 40 years after the first installment, and the costume design is apt and practical. The muted colours and the shapelessness of the clothes add to the canvas of desolation and fear, and also merge with the background, enhancing the insignificance of the characters. The music and background noise are both, well, haunting. The editing is crisp, and follows a set pattern, with the horror element thrown in at regular intervals (in case you forget and get too comfortable).

Phoebe Fox leads the movie out of oblivion by making a mark as the protagonist who is determined to protect the children. She is almost flawless. Helen McCrory seems a little stereotyped. Jeremy Irvine is the eye candy in the movie, and he is appealing as an actor as well. The children, too, make an impact.

The Woman In Black 2 is not as compelling as its predecessor, but it has its strong points, most of them visual. If you want to understand the background, then you must watch The Woman In Black first. If, however, all you want are a few thrills and screams, then this film is good enough as a stand-alone product. We highly recommend the former, though - and also, if you can, read the book that started it all.
Share. Save. Connect.
Tweet
THE WOMAN IN BLACK... SNAPSHOT
THE WOMAN IN BLACK 2: ANGEL OF DEATH SNAPSHOT 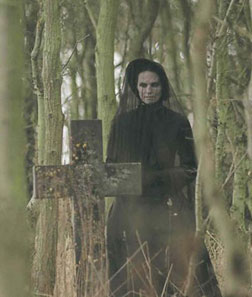 ADVERTISEMENT
This page was tagged for
The Woman In Black 2: Angel Of Death english movie
The Woman In Black 2: Angel Of Death reviews
release date
Helen McCrory, Jeremy Irvine
theatres list
Follow @fullhyderabad
Follow fullhyd.com on
About Hyderabad
The Hyderabad Community
Improve fullhyd.com
More
Our Other Local Guides
Our other sites
© Copyright 1999-2009 LRR Technologies (Hyderabad), Pvt Ltd. All rights reserved. fullhyd, fullhyderabad, Welcome To The Neighbourhood are trademarks of LRR Technologies (Hyderabad) Pvt Ltd. The textual, graphic, audio and audiovisual material in this site is protected by copyright law. You may not copy, distribute, or use this material except as necessary for your personal, non-commercial use. Any trademarks are the properties of their respective owners. More on Hyderabad, India. Jobs in Hyderabad.