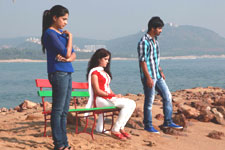 Ravi Kandala / fullhyd.com
EDITOR RATING
3.0
Performances
Script
Music/Soundtrack
Visuals
3.0
2.0
3.0
2.0
Suggestions
Can watch again
No
Good for kids
No
Good for dates
No
Wait to rent it
No
Madhura Sreedhar is a man who generates good hype for his movies - we will give him that. His first movie, Sneha Geetam, was a decent watch, while the follow-up, It's My Love Story, did not really live up to the hype. In fact, the only reason the second flick was talked about was that Chetan Bhagat had come to its premiere.

Even for Back Bench Student, Madhura Sreedhar managed to get some hype, by having the hero read Bhagat's "What Young India Wants" on the posters. Chetan Bhagat even tweeted the poster and gave him some free publicity.

But after sitting through the movie, we can confidently tell you that the director definitely does not understand what "young India" really wants.

The story is about Karthik (Mahat Raghavendra), a lazy youngster who joins engineering and fails 16 subjects in the 4 years that follow. He falls in love with Priyanka (Archana Kavi), in his college days. However, when the girl reveals that she is going to the US to pursue her Masters, he behaves like a perfect jerk. And when the girl does go to the US, all he does is cry for an evening before deciding to move on with his life.

He strikes a friendship with Chaitra (Pia Bajpai), a girl he had rescued from some goons earlier. Now, in a twist that is only possible in the world of Telugu films, our genius boy-hero is a brilliant ethical hacker, who helps Chaitra's company in a moment of crisis.

The crisis in question is that the entire computer network in Chaitra's office is hacked by a group of Pakistani hackers. Our hero rebuffs the hacker attack in less than two and half hours, and is invited to sit on a conference call with the American boss of the company for having helped the company. He is then offered a job with a salary of INR12 lakh per annum (we normally try and include a dash of humor in our reviews, but in this case, we are sure that the above para would take care of the humor part)!

Karthik promptly falls in love with Chaitra, kisses her in the office lift, and proceeds towards a dream song. However, Chaitra dumps him when she finds out that he never told her about Priyanka, a girl he had loved for four years.

And then Priyanka leaves her Masters program and flies back, because she cannot forget him. By the end of the movie, none of us is interested in finding out who he marries. The more interesting question is why these two intelligent, independent working women would want a wastrel like Karthik.

According to director Madhura Sreedhar, Back Bench Student is supposed to convey the message that failures in exams need not be failures in life, and that you can succeed if you follow your passion. However, the hero in question has no passion in life.

The script also denounces the working class, saying that they struggle all through their college life only to be the scum of some office toiling away to earn two square meals. The director clearly fails in conveying his message, and most certainly ends up saying the wrong things.

There are several scenes that strike wrong notes, like the one in which the hero and heroine, who are both engineering students, sleep in the hero's bed in his home - we are told that the hero's mother had who put the girl in the bed after having found her drunk. Or the scene in which the hero ridicules his professor asking him if he had studied engineering to become a lecturer.

Acting-wise, all three leads fail to impress. Mahat Raghavendra looks nowhere close to a hero, and his acting skills make us doubt if he failed in 16 subjects in acting school, one of them surely being voice modulation. He delivers all his lines in a monotone.

Archana Kavi could not even lip-sync to her lines, and ends up looking like she is chewing popcorn whenever she utters a dialogue. Pia Bajpai puts in an effort, though. The friends of the hero put in a decent performance, while seniors like Ali and Brahmanandam are wasted.

The music hardly registers, and Sunil Kashyap also dares to use two of Maniratnam and Ilayaraja's best numbers in badly remixed versions. The background score, cinematography, dialogues and all other technical departments contribute to making the flick look like an amateur effort.

The director talks loftily about Sachin, Dhoni, and even Barack Obama, being back-benchers, and throws in lines about how success cannot be defined by marks scored in exams. He might be right there, but the way he portrays it in the movie is inexcusable and misleading. Stay far away from this one.
Share. Save. Connect.
Tweet
BACK BENCH STUDENT SNAPSHOT 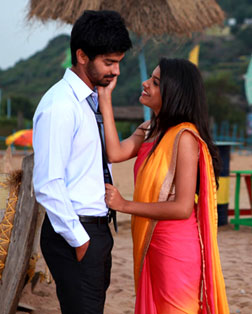 ADVERTISEMENT
This page was tagged for
back bench student movie
Back Bench Student telugu movie
Back Bench Student reviews
release date
Mahat Raghavendra, Piaa Bajpai
Follow @fullhyderabad
Follow fullhyd.com on
About Hyderabad
The Hyderabad Community
Improve fullhyd.com
More
Our Other Local Guides
Our other sites
© Copyright 1999-2009 LRR Technologies (Hyderabad), Pvt Ltd. All rights reserved. fullhyd, fullhyderabad, Welcome To The Neighbourhood are trademarks of LRR Technologies (Hyderabad) Pvt Ltd. The textual, graphic, audio and audiovisual material in this site is protected by copyright law. You may not copy, distribute, or use this material except as necessary for your personal, non-commercial use. Any trademarks are the properties of their respective owners. More on Hyderabad, India. Jobs in Hyderabad.