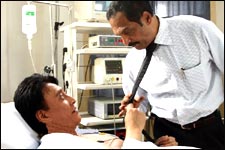 1. Indians are crazy about cricket and Bollywood movies, so when it’s cricket plus Bollywood, the passion becomes a cacoethes. The makers of this one have timed its release just a day before India’s first match in World Cup 2007, and YES, the timing has paid off. The theatre was so chocked up, you feel like you’ve gone to watch an SRK movie. Heck, most Indians can eat in a tannery if it has a TV set screening a live match. So there ‘had to be’ a hullabaloo. *shrug*

2. Okay, there is only one reason.

Hat Trick narrates 3 stories; all stories connected with cricket and set in the poignant backdrop of the “War At Windies”. The film opens with the beginning of World Cup 2007. The whole theatre goes screaming and whistling only to realize… I’ll get back to this later. Let’s first get the stories out of the way:

1. Madhav Anna (Danny Denzongpa) is an ex-cricketer who lives every moment of his life devoted to cricket. Satyajeet Chavan (Nana Patekar), a cynical, rude and loud doctor treating him for a life-threatening ailment, hates cricket, and so Madhav Anna will have to skip watching the World Cup during his stay at the hospital.

Satyajeet however undergoes a life-changing experience with Madhav Anna, which results in his restoring his relationship with his wife Surekha and son Mihir, and developing a new rapport with members of the hospital. Madhav Anna gets to watch the final, and also survives his operation, and Satyajeet learns to live again.

2. Hemu Patel (Paresh Rawal), also a cricket fanatic, is an illegal immigrant living in London for 16 years. His single pre-occupation in life is getting a UK citizenship, even if that implies tampering with his passionate Indian cricketing patriotism.

3. Saby (Kunal Kapoor) is a cricket freak, and Dhoni’s blitzkrieg batting stimulates him more than his seductive wife (Rimi Sen). So he gives her a crash course in cricket, and this has an extreme effect – she is stumped by love for Dhoni. Then commences Saby’s relentless fielding to outwit his wife’s accelerating obsession. A boring and tiresome track.

Hattrick falls into the same multiple-tracks straitjacket that Salaam-E-Ishq famously killed for everyone else, with another creatively challenged director who’s having a hard time conceiving one single meaningful storyline, trying to make up for in quantity what he cannot come up with in the other q. And the lack of quality is glaring.

Nana’s decision to organize a mock World Cup match, for example, is implausible. Then, Kunal and Rimi’s unstable relationship is back on track just like that. I mean, imagine Kabhi Khushi Kabhi Gham without the last scene – SRK back in the house randomly!

Indeed, it takes quite a gripping screenplay to keep your audiences amused with multiple stories, but for Milan Luthria, it appears a Sisyphean task. You want the movie to stir your soul, push your intellect, or at the very least, break your heart or make you laugh. But it's such a repetitive and thinly constructed piece of writing, that the scope of the subject in terms of hype, story and the message of the true sportsman spirit are turned to porridge. Also, more attention could have been paid to the overall aesthetics.

Nana Patekar’s character is poorly etched – it’s an alter ego of the Raghav Shastri of Taxi No. 9211. Only, while Taxi No. 9211 was nice Sunday afternoon watchable kind of film, Hat Trick is a Tuesday afternoon “watch-it-in-tandom-with-the-K-serials” kind. But there are scenes, especially in the climax, when Nana’s immense emotive range reminds you of his Parinda and Prahaar days. Danny Denzongpa is pretty okay.

Paresh Rawal is arguably the best comedian around. There’s no Hera Pheri performance here, though. Here again, the character is like an extension of Kehta Hai Dil Baar Baar’s Roger Patel. A great actor wasted in a not-so-great role.

Kunal Kapoor looks good even with his stubble. Rimi Sen’s acting is so wooden, you are tempted to believe that even Amisha Patel could have done a better job. The music, however, is enjoyable, with the song Ek Pal Mein reminding you of the evergreen Aane Waala Pal.

And to complete something I left trailing, the whole theatre went screaming and whistling only to realize… that a Bangladesh vs. Scotland match in the World Cup would have been a better choice.
Share. Save. Connect.
Tweet
HATTRICK SNAPSHOT

ADVERTISEMENT
This page was tagged for
hettrick movei
utthaan
Hattrick hindi movie
Hattrick reviews
release date
Follow @fullhyderabad
Follow fullhyd.com on
About Hyderabad
The Hyderabad Community
Improve fullhyd.com
More
Our Other Local Guides
Our other sites
© Copyright 1999-2009 LRR Technologies (Hyderabad), Pvt Ltd. All rights reserved. fullhyd, fullhyderabad, Welcome To The Neighbourhood are trademarks of LRR Technologies (Hyderabad) Pvt Ltd. The textual, graphic, audio and audiovisual material in this site is protected by copyright law. You may not copy, distribute, or use this material except as necessary for your personal, non-commercial use. Any trademarks are the properties of their respective owners. More on Hyderabad, India. Jobs in Hyderabad.