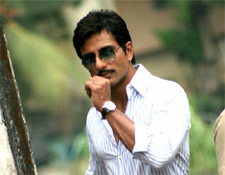 Deepa Garimella / fullhyd.com
EDITOR RATING
3.5
Performances
Script
Music/Soundtrack
Visuals
7.0
4.0
6.0
6.5
Suggestions
Can watch again
No
Good for kids
No
Good for dates
No
Wait for OTT
Yes
Cop movies nowadays have a lot of potential - to put you to sleep. There's the weather-beaten theme, the stereotyped Mumbai underworld setting, the unsure acting, and the unimpressive dialogues. What's not to like?

Maximum is one of those movies that try to be classy but lack the capability to. There's intention, there's a plot, and there's the big setup, but somehow, things don't come together the way the really good filmmakers make them.

The story is actually a cop vs cop drama. Pratap Pandit (Sonu Sood) is an encounter specialist who used to report to the much senior Arun Inamdar (Naseeruddin Shah), but who now is in such a powerful position that Inamdar has no scope for growth in his department while Pandit is around.

Inamdar now decides to capture "maximum power" in the force, and starts plotting to stifle Pandit's career. The plot is not about an upright officer fighting a bad system, neither is it a David vs Goliath story - it's simply about unapologetic power politics. Neither of the cops is honest or straightforward. Plus, there's an established nexus among the police force, politicians, the construction industry and the underworld, none of which can function smoothly without the help of the others, and this is what the film derives its story from.

And all along, an honest TV journalist (Amit Sadh) hangs out with all the central characters in the film (all the time), thereby giving him enough clout to be the narrator of the story.

However, nothing about the plot is thrilling. The cops don't seem very exciting, and the old politics-underworld-gangster-cop link has lost its intrigue anyway. The film also has the texture and pacing of that of a saas-bahu soap that takes forever to get to the next scene.

There's also a very visible effort, in Maximum, to appear like an art movie. Close-up shots, slow-paced dialogues, empty pauses during scenes, and wannabe-abstractness betray the struggle to go win an award somewhere. Maybe the director will, after he's done some more of these films, but currently, it all just adds to pretty much nothing.

Some things are left unexplored. Pandit starts an extra-marital affair with a Bollywood starlet (Anjana Sukhani), and we see no more of it after a lame confrontation with his wife (Neha Dhupia). Pandit also has a father whose philosophical observations seek to elevate the plot, but profundity is something this movie cannot handle.

Sonu Sood's potential hasn't been used to its fullest here, and he's left to smugly connive with businessmen or passively react to an unfair suspension. What happened to the seething Sonu Sood of Telugu cinema?

Naseeruddin Shah looks bored, but Swanand Kirkire is good. Neha Dhupia doesn't fit her role as a housewife - nope, cotton sarees aren't an end in themselves. Vinay Pathak could sleepwalk through a role like this - he plays a shrewd politician calmly and confidently plotting his rise to the top.

The music doesn't have anything to load on to your playlist. By the way, Aa Ante Amalapuram is a misfit, both visually and aurally. However, the cinematography is pretty good.

To sum up, skip Maximum unless you're particularly craving for a multiplex movie.
Share. Save. Connect.
Tweet
MAXIMUM SNAPSHOT 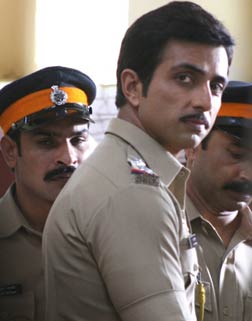 Personalities like Sonu Sood may have persona that adds up to just 2 if he becomes the main lead (1) but when his kinda persona works with some other 'stars', he becomes 11. Please, don't try to lead yourself all the way and never listen to your chamchas who goad you to become an Hero.

As far as story is concerned, the best on the underworld and police has already been told by RGV. Why the heck Kabeer wants to work on that genre? Overconfidence or lack of stories???

ADVERTISEMENT
This page was tagged for
Maximum hindi movie
Maximum reviews
release date
Sonu Sood, Naseeruddin Shah
theatres list
Follow @fullhyderabad
Follow fullhyd.com on
About Hyderabad
The Hyderabad Community
Improve fullhyd.com
More
Our Other Local Guides
Our other sites
© Copyright 1999-2009 LRR Technologies (Hyderabad), Pvt Ltd. All rights reserved. fullhyd, fullhyderabad, Welcome To The Neighbourhood are trademarks of LRR Technologies (Hyderabad) Pvt Ltd. The textual, graphic, audio and audiovisual material in this site is protected by copyright law. You may not copy, distribute, or use this material except as necessary for your personal, non-commercial use. Any trademarks are the properties of their respective owners. More on Hyderabad, India. Jobs in Hyderabad.