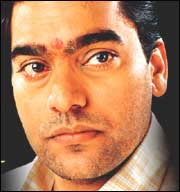 Kashif Ali / fullhyd.com
EDITOR RATING
5.0
Performances
Script
Music/Soundtrack
Visuals
NA
NA
NA
NA
Suggestions
Can watch again
NA
Good for kids
NA
Good for dates
NA
Wait to rent it
NA
It's all about milk and cows. So, it starts out with Sharad kapoor and his character Lal, encountering two men. They die. He then attends a press conference where he clashes with the reporter, played by Jessy Randhawa, from the Encounters Suck publications. She gets him suspended later in the review for not shaving his beard. He then heads for Mumbai because that's where sewage is the freshest.

Now, we have Uda, a builder of considerable means. One of these means happens to be Prakash. He's a guy who takes care of things discreetly, usually accompanied by atrocious howling. Uda wants to sell this mother of a building that he's built and can't. Reason being the tabela right next to it.

A tabela, for the uninitiated, is a place where cows grow old in peace with the occasional rude hauling of their delicates. This place is owned by one Kishen Yadav of the Ashutosh Rana fame and his younger brother Kabir (Rohit). Kabir is young. His love interest is the reporter who rang in the New Year when she tried to milk the poor cow.

Anyway, Mr. Yadav is of a very amiable disposition and just wants to go about his business of milking them cows. But then Lal has plans of his own. He wants the top floor of the building and can get it only if he whammies the tabela to the nether regions of Mumbai.

Of he sets for the land of moo and poo only to be shown the door by Yadav. An ensuing tussle sees Rohit socking Mr. Lal. Now you never sock a policeman unless you pay him first and get him drunk. Rohit learns this the hard way.

After being cordially introduced to the business ends of some legs and fists, he is pushed into the awkward position of being a trade consignment. Meanwhile on the other end we have Yadav pleading with the police to let him see his brother.

Enter Mr. Hamdard, a group leader of sorts with a Bihari accent that could drag the cat home. He pacifies Yadav and tells him to that he will get to bottom of this dairy massacre. He does so by sitting down in front of the police station and telling all those extras that he's gonna immolate himself. Personally, that would have been fun since the only gore that we get is in the acting department.

Anyway, Hamdard is sent to meet Uda and negotiate a transfer of goods. Initially we see Mr. Hamdard expounding to the world that he won't stand for injustice towards the poor people. Then the voice disappears abruptly and we are to assume that Mr. Hamdard went mmuuahahaha.

After going mayday on his people, he gets Yadav to agree to the demands of the bad people. As the documents, that say the tabela will be put down, are about to be signed; the cavalry arrives. Yadav gets his son back, the bad men flee and Bharthi (Nethra Raghuraman) shows us why she's an anti-corruption officer. 'Coz she said it in one breath.

All woulda been fine. But then Prakash didn't like seeing Lal just sitting round, on account of him being suspended. So he gets up and sits behind Lal. That gets old after a while and out they go on an expedition of wreaking havoc.

Kabir has had enough and wants to stop acting. But not before he becomes a "bhai". So he pops a few in Prakash and a sacrificial laddie of Lal's. He starts wearing skin tight tees and gets abruptly smacked by his brother.

Being God-fearing, Yadav doesn't take very kindly to his brother's clandestine operations that result in loss of reel. The only way to bring the bad bad men to justice is for Rohit to appear in court and testify against them, says Bharthi.

Very well says Rohit and ends up taking two in the back as he's heading for the court. Having paid the price for listening to his elders, he dies. Yadav gets rather peeved and starts chopping of heads.

It ends in the tabela, where the innocent milk of arrogant cows and pale blood of dark men is spilled. Post carnage, Yadav purifies his soul by washing away all the blood with a good dose of asli milk. Doodh ka doodh and khoon ka khoon, as he had prophesied in the beginning of the movie.

Rather a pity that Ashutosh Rana doesn't get to do movies that give his talent free reign. Sharad kapoor does a decent enough job at being menacing. The two wemen are better of modeling. Rohit can escape the guillotine if he leaves the country. See… I can be kind. The music is long and tiring even though we have Adnan Sami and Sonu Nigam giving us the earful.

Message of the movie: never ever piss your milkman off. Ever. Keep quiet when he dilutes the water in your milk with some more water and you get to keep your head.

ADVERTISEMENT
This page was tagged for
chot hindi mov
Chot hindi movie
Chot reviews
release date
Ashutosh Rana, Sharad Kapoor
Follow @fullhyderabad
Follow fullhyd.com on
About Hyderabad
The Hyderabad Community
Improve fullhyd.com
More
Our Other Local Guides
Our other sites
© Copyright 1999-2009 LRR Technologies (Hyderabad), Pvt Ltd. All rights reserved. fullhyd, fullhyderabad, Welcome To The Neighbourhood are trademarks of LRR Technologies (Hyderabad) Pvt Ltd. The textual, graphic, audio and audiovisual material in this site is protected by copyright law. You may not copy, distribute, or use this material except as necessary for your personal, non-commercial use. Any trademarks are the properties of their respective owners. More on Hyderabad, India. Jobs in Hyderabad.