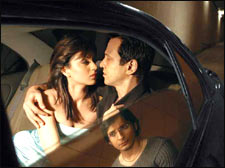 Samrat Sharma / fullhyd.com
EDITOR RATING
6.0
Performances
Script
Music/Soundtrack
Visuals
NA
NA
NA
NA
Suggestions
Can watch again
NA
Good for kids
NA
Good for dates
NA
Wait for OTT
NA
At the Summer Theatre Festival at National School of Drama every year, they perform a hilarious play about a young man trying to climb the corporate culture. Shortcut, as it is called, is based on the Broadway adaptation of The Apartment, and though the basic plot is the same in all of them, the treatment in the Hindi play has to be seen to be believed. By serious theater standards, they take the production values and overall thematic presentation to ludicrous, festive levels that only a play in India can.

Anurag Basu's multiple strands in one tale, Life in a Metro, reminded me a lot of that play in more ways than one. First, the obvious - there is one arc in the film that is a serious, dour version of the play. Second is the less obvious, but a larger connection between the two. Basu's film is a careful exploration of the dark emotions of people in a major city; something that has been attempted by a lot of foreign filmmakers before, but only in Bollywood has a director the audacity to carry it off in such a blatant, raucous fashion, with such entertaining aplomb.

I haven't seen either of Basu's previous outings, but something that this film establishes from the first time a rock band appears on screen is that while there may be ideas from all over in this film, the director's stamp is unmistakable in it throughout. There is nary an inconsistent shot or treatment in the entire film, something that could teach the likes of Nikhil Advani and Reema Kagti a lot. Unlike those two, Basu's multi-starrer does not contend itself with being a romantic comedy with many stories either. This is a romantic comedy only in parts.

The other parts are a bittersweet exploration of the myriad emotions of the human condition, seen through the mirror of a big metropolitan city. Rahul (Sharman Joshi) is an executive in an IT firm who pines for co-worker Neha (Kangana Ranaut), while she is the object of the boss Ranjeet's (Kay Kay Menon) affection. Ranjeet is married to Shikha (Shilpa Shetty), and when he begins to neglect their family, the latter is drawn to Akash (Shiny Ahuja), a theater artist.

Shruti (Konkana Sen Sharma) is an employee at a radio FM channel, and while she longs for a rambunctious RJ, she gets to meet Debu (Irrfan Khan) through a matrimonial column. In a most welcome surprise, we also have Dharmendra in a cameo as Amol, a retired man who is in India after a gap to meet someone he has always loved (Nafisa Ali). Phew, right?

It is surprising how Basu does not get bogged down with such a large character sheet, and delivers an even-handed treatment throughout. He has a bunch of talented actors at his disposal, and while Khan, Shetty and Sen Sharma put in performances that will long linger long after the film is over, Dharmendra, Menon, and Joshi are natural to the core. The only weak links are Ranaut, who, while she seems affable enough, does not pack in the credibility that the others do, and Ahuja, who has not been given enough scope in the script.

Ah, the script. If only Basu had decided to polish the script further and flesh out the arcs a little bit better, he would have had a bravura piece of film in his hands. As it stands, the script turns in some decent dialog, but a largely clunky pacing, and a few underdeveloped characters. Not having a solid third act also rankles, as some of the character arcs are so abruptly resolved, the logic and closure of those is questionable at best.

The script's off-putting and shaky pacing is also accentuated by the smattering of songs in the film. Every character arc or emotion has a song by a rock band playing on screen, and that just makes whole periods in the film lethargic to the core. Don't get me wrong - this is a fun conceit, and I loved the unique handling of the necessity of music in the film. It's just that it would have helped if the songs helped the script along, not actually slow down the already slacking pace.

Much as I would like to find fault with a half-baked writing attempt by Basu and editor-turned-writer Sanjib Datta, in the end, I must contend with the fact that Basu's attempt is a pure Bollywood take on the emotional ride of individuals in the big city. The resolutions may not be perfect, but they are in sync with the very prominent Bollywood sensibility that the director has.

The film clicks where it means the most, though: it entertains, it gives us a few laughs, and it provides us performances to savor. It is a flawed bit of entertainment, sure, but it is still better handled than the other multiple story threads we have seen this year. Most importantly, it may be at times audacious and at times believable, at times madly glossy and at times sufficiently raw; but it is, at all times, pure Bollywood entertainment, and that is what we came here to see, did we not?
Share. Save. Connect.
Tweet
METRO SNAPSHOT

ADVERTISEMENT
This page was tagged for
Metro hindi movie
Metro reviews
release date
Shiny Ahuja, Shilpa Shetty
theatres list
Follow @fullhyderabad
Follow fullhyd.com on
About Hyderabad
The Hyderabad Community
Improve fullhyd.com
More
Our Other Local Guides
Our other sites
© Copyright 1999-2009 LRR Technologies (Hyderabad), Pvt Ltd. All rights reserved. fullhyd, fullhyderabad, Welcome To The Neighbourhood are trademarks of LRR Technologies (Hyderabad) Pvt Ltd. The textual, graphic, audio and audiovisual material in this site is protected by copyright law. You may not copy, distribute, or use this material except as necessary for your personal, non-commercial use. Any trademarks are the properties of their respective owners. More on Hyderabad, India. Jobs in Hyderabad.