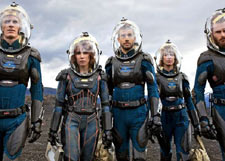 Nupur Barua / fullhyd.com
EDITOR RATING
7.0
Performances
Script
Music/Soundtrack
Visuals
5.0
7.0
6.0
9.0
Suggestions
Can watch again
Yes
Good for kids
No
Good for dates
No
Wait for OTT
No
According to Greek mythology, Prometheus was a Titan who created humankind from clay. It is fitting, therefore, that a spaceship leading a group of scientists into the unknown, to explore the possibility of discovering the creators of human DNA, is named after this errant God.

The customised ship, Prometheus, takes more than 2 years to reach its destination. The crew, led by Weyland employee Meredith Vickers (Charlize Theron), are in statis, or asleep, till they reach LV-223. The ship is managed in the meantime by the android/robot, David (Michael Fassbender), the maintenance person, who also doubles up as a butler.

None of the actors, with the exception of Fassbender, delivers much. Most of them seem flabbergasted at being chosen to be a part of the movie. The cast and the climax are the biggest disappointments of the movie. Despite that, Prometheus is a great watch, and the last sequence will make it clear to you, if you are a fan of science fiction films, where the makers intend to head, if there is a sequel.
Share. Save. Connect.
Tweet
PROMETHEUS (3D) SNAPSHOT 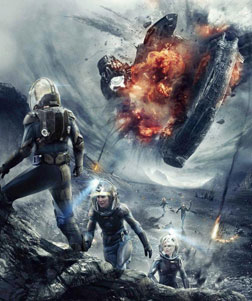 ADVERTISEMENT
This page was tagged for
Prometheus (3D) english movie
Prometheus (3D) reviews
release date
Noomi Rapace, Michael Fassbender
theatres list
Follow @fullhyderabad
Follow fullhyd.com on
About Hyderabad
The Hyderabad Community
Improve fullhyd.com
More
Our Other Local Guides
Our other sites
© Copyright 1999-2009 LRR Technologies (Hyderabad), Pvt Ltd. All rights reserved. fullhyd, fullhyderabad, Welcome To The Neighbourhood are trademarks of LRR Technologies (Hyderabad) Pvt Ltd. The textual, graphic, audio and audiovisual material in this site is protected by copyright law. You may not copy, distribute, or use this material except as necessary for your personal, non-commercial use. Any trademarks are the properties of their respective owners. More on Hyderabad, India. Jobs in Hyderabad.