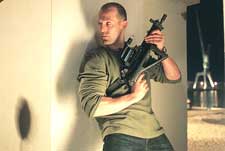 Jason Stratham is an agent constantly assigned to deliver any packages to anyone desired. A transporter who zips about town pretty quickly, something like New York cab drivers, his one exception is that he knows where he's headed. Give him an address in Nice or Marseilles or Grenoble and he'll take your package there, no questions asked. So naturally, one day, he decides to ask questions, wondering about what one of his packages contains, and that's when the fun begins.

A duffel bag turns out to bear a sexy Chinese woman, Lai (Shu Qi), and she soon makes an honest man out of him as women tend to do. Our transporter not only drives BMWs and Mercedes, but is at ease hijacking a private plane, swimming in the deep, repelling a missile with a silver tray, dodging Uzi-style bullets and even bazooka shells, his desire to live fueled by Shu Qi's character Lai. 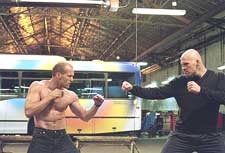 The Transporter is one of those films you go to strictly for the action. The dialog is nearly non-existent. There're logic holes throughout the storyline and occasionally the laws of physics are stretched, but the action is excellent, and that's what this movie is about. The

opening chase scene is the highlight of the film.

If you have seen a lot of Jean Claude Van Damme, Dolph Lundgren or Michael Dudikoff movies, then you will like this one to a point. Even lovers of Van Damme movies will admit that they don't watch those flicks for cerebral enlightenment - it's an adrenaline escape. The Transporter runs into problems when the film loses the plot and it becomes a sort of ping-pong match between hero and villain.

The acting in Transporter is decent, but really, as long as nothing is atrociously bad in the acting department these trips can still be worth it for the most part. Qi Shu's acting (the delivery package) leaves a little to be desired, and it is hard to decode her English - when she does get the chance to speak, that is. Her character has a piece of duct tape over her mouth for most of the film. This is not to say she is not a good actress, but her lack of lines makes her character - whose loyalties are a bit confusing from the start - seem a little dimwitted.

Stratham, though, suffers from none of that malaise. He proves that he is a legitimate challenger to the crown many pundits believe will rest on the head of Van Diesel. The acting performances from the rest of the cast do not really merit a mention, since they are strictly in the run-of-the-mill category. 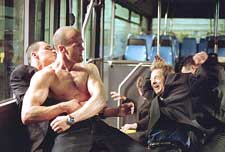 ADVERTISEMENT
This page was tagged for
The Transporter english movie
The Transporter reviews
release date
Jason Stratham, Qi Shu
theatres list
Follow @fullhyderabad
Follow fullhyd.com on
About Hyderabad
The Hyderabad Community
Improve fullhyd.com
More
Our Other Local Guides
Our other sites
© Copyright 1999-2009 LRR Technologies (Hyderabad), Pvt Ltd. All rights reserved. fullhyd, fullhyderabad, Welcome To The Neighbourhood are trademarks of LRR Technologies (Hyderabad) Pvt Ltd. The textual, graphic, audio and audiovisual material in this site is protected by copyright law. You may not copy, distribute, or use this material except as necessary for your personal, non-commercial use. Any trademarks are the properties of their respective owners. More on Hyderabad, India. Jobs in Hyderabad.