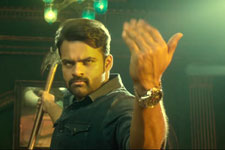 T J Reddy / fullhyd.com
EDITOR RATING
1.5
Performances
Script
Music/Soundtrack
Visuals
3.0
1.0
3.0
5.0
Suggestions
Can watch again
No
Good for kids
No
Good for dates
No
Wait to rent it
No
This film is titled "Inttelligent". Yes, spelt with two Ts. *sigh*. Let's get this over with.

Inttelligent follows a week in the life of Sai Dharam Teja (Sai Dharam Tej). At a tender age, his intelligence is noticed by the CEO of a software company, Nanda Kishore (Nassar). Kishore takes it upon himself to educate and help Teja reach his potential. Teja becomes a software engineer in Kishore's company, which in turn becomes a force for good in the world. The company creates apps that help students, farmers, teachers, the poor and so on. Heads of rival companies are jealous of Kishore's success, and enlist the help of Vicky Bhai (Rahul Dev) to eliminate him.

From this point on, the hero protects the good guys, the villain tries to destroy the hero, comedians do "comedy", heroine shows navel, parents get kidnapped, and you've seen all this done and done better by V V Vinayak himself before.

Indeed, Inttelligent has nothing new on offer to help you look away from all the other films it rips off. It's plot desperately wants to be like that of Dhruva but can't quite cut it. It wants its lead character to be a clone of Chiranjeevi's Satyanarayana Murthy from Jai Chiranjeeva but the actor can't act well enough for that. Music director Thaman would have loved to distract us from the frankly ludicrous plot with some peppy tunes but he seems more checked out than we were. The only person seemingly living up to her potential is lead actress Lavanya Tripathi as she continues the hallowed tradition of the female lead being the wholly forgettable and utterly unnecessary part of any "mass" movie.

As you watch Inttelligent, you'll quite likely miss the good old days of pre-2010 V V Vinayak. His films were never ones to stimulate the mind but were never made lazily. They worked at entertaining the audiences while awkwardly shoehorning a few broad-stroke, progressive themes he wanted his audience to take home with them. Since then, however, his work has echoed trends instead of setting new ones. The slothfulness in his approach reaches critical mass with his latest venture as it is chock full of uncoordinated extras, unsynchronized background dancers, unnecessary sequiturs, poorly rendered backgrounds, a lack of focus on the primary antagonist, and a hero no man, woman or child can connect to.

Indeed, why would anyone want to spend over two hours watching the story of a man who neither grows nor changes over the course of many life-altering incidents? And the convenient storytelling is so atrocious that the movie expects you to believe that Nanda Kishore raised Teja since he was 10 but the latter never got to know that the former had a daughter. That is not an exception - these moments are scattered uniformly and liberally. Such nonsense exists because the film thought a few cheap moments of comedy would redeem its turgid first 20 minutes. You even welcome misplaced songs derailing the narrative in the hope that they will provide some respite from the sheer ineptitude being shown on screen.

To add to the poor narration, unlike last week's Chalo that cleverly kept itself watchable owing to a wealth of comic talent being given free reign to express themselves, Inttelligent chooses to hold its cast of supporting characters back. It instead prefers to worship its hero so much that the lead actress appears barred from mimicking his dance moves lest she takes away any of the spotlight from him. The spotlight does shine on him alright. It highlights every single dent in his armour to an alarming degree. Sustained involvement with such shoddy material might not leave Sai Dharam Tej's career in any state capable of salvaging. He is a passable actor when paired with a strong story and a capable director, but in Inttelligent, he has neither.

Neither the songs nor the choreography can rustle your jimmies, so to speak, and the lesser said about the bland presentation the better. With poor green screen and blood effects leading the charge, the movie works uncharacteristically hard to retain its visual mediocrity. But we ask, when the film around it is so objectively poor, is aspiring to mediocrity such a bad thing?

As we wrap this review this up, we'd like to leave you with one last example of this film's laziness. Its last line is "nanna neeku emi kaaledu ga, hospital ikkade undi". Teja utters that line and the movie ends abruptly. The filmmakers themselves seem to have given up and couldn't wait to move on to better things.
Share. Save. Connect.
Tweet
INTTELLIGENT SNAPSHOT 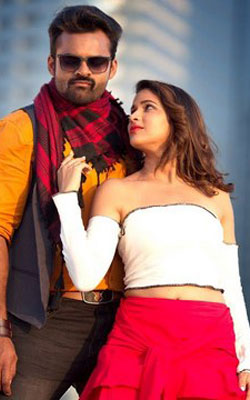 ADVERTISEMENT
This page was tagged for
Inttelligent telugu movie
Inttelligent reviews
release date
Sai Dharam Tej, Lavanya Tripathi
theatres list
Follow @fullhyderabad
Follow fullhyd.com on
About Hyderabad
The Hyderabad Community
Improve fullhyd.com
More
Our Other Local Guides
Our other sites
© Copyright 1999-2009 LRR Technologies (Hyderabad), Pvt Ltd. All rights reserved. fullhyd, fullhyderabad, Welcome To The Neighbourhood are trademarks of LRR Technologies (Hyderabad) Pvt Ltd. The textual, graphic, audio and audiovisual material in this site is protected by copyright law. You may not copy, distribute, or use this material except as necessary for your personal, non-commercial use. Any trademarks are the properties of their respective owners. More on Hyderabad, India. Jobs in Hyderabad.