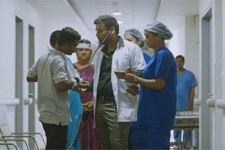 Ajay Kumar R / fullhyd.com
EDITOR RATING
4.0
Performances
Script
Music/Soundtrack
Visuals
5.0
4.0
4.0
3.0
Suggestions
Can watch again
No
Good for kids
No
Good for dates
Yes
Wait for OTT
No
To describe Nandini Nursing Home as a horror flick set amid romance and comedy would seem inaccurate. Calling it a romantic comedy set amid a haunting doesn't fit, either. We tried a few other combinations, but to no avail - P V Giri's directorial debut is a genre jigsaw.

Chandu (Naveen Krishna), a Vizag-based bank officer with a failed love affair and a drab and monotonous outlook on life coupled with a new-found fling with making money, arrives at Hyderabad seeking new opportunities. Through a friend (Shakalaka Shankar), accidental credentials in the application form and a highly asinine interview, Chandu bags the post of a junior doctor in Nandini Nursing Home (yes, you read that right). With the fraudulent credentials, Naveen impresses the hospital owner and the latter's daughter Nandini (Nitya Naresh).

Things go terribly wrong when rumours of the hospital being a freak house at nights spread, and Chandu involuntarily ends up killing a high-priority patient by administering a lethal dose of an unrecommended drug. Chandu now needs to reconcile with a life that is torn apart by the bitter memories of a past love (Amulya, played by Shravya), a manslaughter that has resulted from his fake creds, a hospital that turns into a horror asylum at dusk, a mind-numbing secret about the hospital administration, a dark and indigestible truth about Nandini, and a ghost of Christmas past.

Giri's NNN doesn't take off quite well, despite tickling your funny bones now and then with its comedy (sometimes decent and other times risqué). It uses a half-assed love story with a pinch of "horror", which, by the way, fails miserably at scaring you. The script is dented with plot holes - how can you accept a "doctor" into your hospital without doing a background check on him? The job interview Naveen has with Nandini seems tailor-made to get him through with its fairly trivial questionnaire that completely omits "medicine" and "surgery" from "M.B.B.S.".

Editor-turned-actor Naveen Krishna might not deliver a breakaway performance, but emotes decently for a debutante. Nitya Naresh is not suited for the role and doesn't deliver on expressiveness. Shravya is probably the better of the three leads, but goes overboard too many times. Comedians Vennela Kishore and Shakalaka Shankar are worth mentioning as they deliver when you need it the most. The comedy, however, does not gel with the horror.

The music (Achu Rajamani, Shekhar Chandra) has nothing new to offer with its deadbeat folk and desi hip-hop fusion. And the background score during the horror sequences ruins even the mildly scary bits.

The cinematography is piss-poor, and doesn't give you the feeling of this being even remotely a horror flick. The movie has around three or four scary moments, which aren't really that scary except for those who shiver at the noises of even ruffling leaves. Towards the end, when you're finally shown the apparition / ghost that was behind the haunting, you ask yourself why you even bothered. The movie could have used some VFX and thought, but never mind.

The big disappointment about Nandini Nursing Home is that it attempts to blend horror and laughter by putting all its weight on comedy, utterly failing to scare you. Watch it for the occasionally funny comedy.
Share. Save. Connect.
Tweet
NANDINI NURSING HOME SNAPSHOT 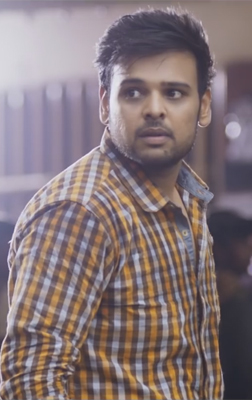 ADVERTISEMENT
This page was tagged for
bhavika nursing home in horror old telegu movie
Nandini Nursing Home telugu movie
Nandini Nursing Home reviews
release date
Naveen Vijay Krishna, Nitya Naresh
Follow @fullhyderabad
Follow fullhyd.com on
About Hyderabad
The Hyderabad Community
Improve fullhyd.com
More
Our Other Local Guides
Our other sites
© Copyright 1999-2009 LRR Technologies (Hyderabad), Pvt Ltd. All rights reserved. fullhyd, fullhyderabad, Welcome To The Neighbourhood are trademarks of LRR Technologies (Hyderabad) Pvt Ltd. The textual, graphic, audio and audiovisual material in this site is protected by copyright law. You may not copy, distribute, or use this material except as necessary for your personal, non-commercial use. Any trademarks are the properties of their respective owners. More on Hyderabad, India. Jobs in Hyderabad.