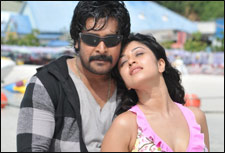 Harika Vankadara / fullhyd.com
EDITOR RATING
1.0
Performances
Script
Music/Soundtrack
Visuals
5.0
1.0
4.0
3.0
Suggestions
Can watch again
No
Good for kids
No
Good for dates
No
Wait for OTT
No
Mr. Rascal was to be Parachuri Ravindranath's ticket to the echelons of Tollywood's demigods. The supporting cast of the film and the director are all people with talent to be reckoned with. Director R V Uday Kumar has to his credit movies with Kamal Haasan and Rajnikanth in the lead. Prakash Raj, Tanikella Bharani, Bramhanandam, Ali, Ravi Babu and Venumadhav need no introduction.

What ruins the movie is a script that comes as a rude shock, especially considering that the man who penned it, Parachuri Venkateswara Rao, is something of a legend who authored dialogues for more than 350 films alongside his brother.

Mr. Rascal is a movie that focuses on the hottest topic in the country - corruption. Among the major reasons that corruption is rampant in India is that impressionable children are brought up to consider corruption a necessary evil. This is a message that can be delivered to the public in a myriad of ways, and Mr. Rascal is definitely not one of them.

Ravindranath plays a character who you start out believing is the villain, but who you realize is the protagonist only after he attempts to dance for the first song in the film. An uneducated drunkard who, at the beginning of the film, breaks a beer bottle on his father's (Tanikella Bharani) head, Ravi is sent to live with his uncle (Prakash Raj), an encounter specialist, in Visakhapatnam.

Ravi catches a couple involved in an extra-marital affair, at a golf course near his uncle's house. Madhumati (Nadeesha Hemamalini), the woman in the affair, is cheating on an unrealistically clean husband (Suresh), who considers her to be his personal harbinger of success.

Ravi blackmails Madhumati with a video tape of her extra-marital sexcapades, and makes her fund his lifestyle.

Ravi then brings in his gang from his village, and they fly to Bangkok for a holiday funded by Madhumati. It is here that Sowndarya (Payal Ghosh of Prayanam fame) steps into the proceedings in a 2-piece swimsuit.

No prizes for guessing here that the two fall in love and that Sowndarya transforms her lover into an honest man. The audience is expected to believe that a person who is bereft of morals is capable of suddenly, completely believing in the romance of hearts rather than of bodies.

The story seems to be the sorry result of the stringing together of choice case studies that deal with extra-marital affairs and the nurturing of corruption in young minds by dishonest parents. What stop the movie from driving its point home are its unrealistic portrayal of people, and a completely incomprehensive story line.

The script taints Madhumita's character only by talking about her husband's squeaky clean qualities. The woman in an extra-marital affair is condemned strongly, in ironic scenes of Ravi chastening Madhumita for having cheated on her husband. Meanwhile, no one is even bothered about the man in the affair, as though cheating on a spouse is a man's birthright.

The female characters have been crafted with utter disrespect to women. And this is an observation you make after you realize that the censor board had directed the snipping off of various sleazy scenes. Women have been sketched to be objects of sex-appeal, dumb enough to be exploited by anyone with half a brain.

Also lacking maturity is the attempt to justify the irrefutably wrong deeds of the leading man by explaining that as an impressionable child he was exposed to corruption by his father.

Various characters in the film do condemn various social evils existing in the present society via inflamed dialogues that are the signature of the Parachuri Brothers. However, it seems as though the movie was made solely to accommodate as many of these emotionally charged dialogues as possible, thus severely compromising on logic.

All the actors have been wasted. The veterans have been given woefully little screen space, during which they can do little to salvage the film. The comedy track starring Bramhanandam and Ali contributes nothing.

The songs are the only noteworthy part of the film. The lyrics are commentaries on ways of life, albeit idealistic in nature.

So should you watch this film? Not unless you're looking for 2.5 hours of your life that you'd rather forget.
Share. Save. Connect.
Tweet
MR. RASCAL SNAPSHOT

ADVERTISEMENT
This page was tagged for
Mr. Rascal
mr rascal telugu movie wiki
Mr Rascal movie videos please
Mr. Rascal telugu movie
Mr. Rascal reviews
Follow @fullhyderabad
Follow fullhyd.com on
About Hyderabad
The Hyderabad Community
Improve fullhyd.com
More
Our Other Local Guides
Our other sites
© Copyright 1999-2009 LRR Technologies (Hyderabad), Pvt Ltd. All rights reserved. fullhyd, fullhyderabad, Welcome To The Neighbourhood are trademarks of LRR Technologies (Hyderabad) Pvt Ltd. The textual, graphic, audio and audiovisual material in this site is protected by copyright law. You may not copy, distribute, or use this material except as necessary for your personal, non-commercial use. Any trademarks are the properties of their respective owners. More on Hyderabad, India. Jobs in Hyderabad.