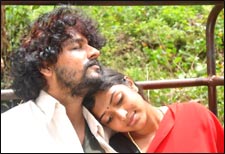 Prema Khaidi is a movie that revolves around Soori (debutant Vidaarth) and Mynaa (Amala Paul, also a newcomer). As a child, Soori extends a helping hand to Mynaa and her mother, who have been rendered homeless by the girl's perpetually intoxicated father. Thereon strikes off a love story that is just as repetitive as history itself.

Trouble begins to brew when Mynaa's mother catches her daughter rewarding Soori with a lip-lock for capturing a jarful of fireflies so that she can study for her exam. Her parental instincts kick in, and having experienced a harsh life herself, she refuses to watch her daughter share her life with a person who cannot offer her daughter with financial security.

In the couple's perspective, Mynaa's mother is the first of a series of impediments to their happily-ever-after. In an incident of all-consuming rage, Soori attacks Mynaa's mother, and the latter promptly lodges a police complaint, as a result of which he is sentenced to 15 days in prison.

On the 14th day of his judicial remand, he receives news of Mynaa being forced to marry a man of her mother's choice.

Soori eels his way out of prison, thereby endangering the lives of families and the jobs of the cops working there. Jailer Bhaskar (Sethu) and constable Ramaiah (Thambi Ramaiah) take upon themselves the task of recapturing Soori within 2 days.

When they reach Soori's village, they witness a loud broil, with Mynaa's mother attacking her daughter with a sickle for having openly declaring her love for her childhood sweetheart.

The journey of the cops, Soori and Mynaa, back to the prison is replete with instances that focus on the tender affection that the lovers harbour for each other. Rendered emotionally vulnerable by a series of events, Bhaskar and Ramaiah allow their egos to bristle. Just as dry lands need but the slightest of friction to burst into a desert fire, the emotionally unstable cops cry out for bloody revenge against Soori, who they hold responsible for their near-broken families.

The conclusion to the film, involving the narcissistic rants of an insecure woman, is an arguable one, that also gives rise to questions regarding justice.

The movie does succeed in moving audiences, but its purpose is lost in a web of emotional out-bursts. Though the tagline of the movie ("journey of love") suggests a focus on love, what really shapes the story is the human weakness that makes one give in to the heat of the moment.

One of the reasons why Prema Khaidi will not deliver at the Tollywood box office is that this is a film that is difficult to digest, even for multiplex audiences. There is an overdose of strong emotions, lending the movie an unpleasant feel.

Vidaarth and Amala Paul are both promising, enlivening their characters with a grace that even veterans fail to deliver at times. Given that both actors have been able to prove themselves via a film with zero glamour quotient, it is clear that they will now leave behind a trail of broken hearts with movies that present them in a well-groomed look. Sethu and Thambi Ramaiah, too, deliver laudable performances.

The picturesque hilly regions of Tamil Nadu and Kerala lose their beauty to incredibly jerky cameras, and continuity in shots is a distant dream.

And if renditions of situational essays with tunes forming the background can be termed songs, yes, there are a couple of songs in here.

Though Mynaa, for Tamilians, is today a film that testifies to Kollywood's celluloid prowess, Prema Khaidi is destined to join the glut of Tollywood flicks that stand long forgotten.
Share. Save. Connect.
Tweet
PREMA KHAIDI SNAPSHOT

ADVERTISEMENT
This page was tagged for
prema khaidi full movie telugu download
khaidi movie
Prema Khaidi telugu movie
Prema Khaidi reviews
release date
Follow @fullhyderabad
Follow fullhyd.com on
About Hyderabad
The Hyderabad Community
Improve fullhyd.com
More
Our Other Local Guides
Our other sites
© Copyright 1999-2009 LRR Technologies (Hyderabad), Pvt Ltd. All rights reserved. fullhyd, fullhyderabad, Welcome To The Neighbourhood are trademarks of LRR Technologies (Hyderabad) Pvt Ltd. The textual, graphic, audio and audiovisual material in this site is protected by copyright law. You may not copy, distribute, or use this material except as necessary for your personal, non-commercial use. Any trademarks are the properties of their respective owners. More on Hyderabad, India. Jobs in Hyderabad.