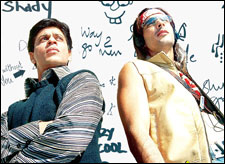 Deepa Menon / fullhyd.com
EDITOR RATING
5.0
Performances
Script
Music/Soundtrack
Visuals
NA
NA
NA
NA
Suggestions
Can watch again
NA
Good for kids
NA
Good for dates
NA
Wait for OTT
NA
Just when you thought Hindi cinema was getting better all the time, behold the revival of the clichés. And on a scale so massive, you can't do anything but sit there suffering quietly, and wonder what else could possibly go hackneyed.

To appreciate a film like Main Hoon Na, it might be necessary to erase the memory of every decent flick you've watched in the past couple of years. Start with Dil Chahta Hai and work your way down to Munnabhai MBBS. And even then you'll be amazed at the complete lack of novelty that this film flaunts.

People who've always believed Shah Rukh is the master of recycled performances will have no reason to revise their opinion with this, his latest. And even the rest of us - who have loved him from Fauji to Devdas - will have trouble defending the guy as he goes through the motions, yet another time. Contrary to what we suspect he himself is starting to believe, there is more to the actor than this. Not that Main Hoon Na is the slightest indication.

Shah Rukh plays Major Ram Prasad Sharma, who loses his father - also an Army officer - in a terrorist encounter. But before he dies, the father (Naseeruddin Shah) leaves him with an akhri khwaish - to find and bring his estranged wife and son together. You see, Ram is actually born of an extra-marital affair, and when he turns up at his dad's doorstep at the age of seven, his father's wife (Kiron Kher) walks out of the marriage with their son.

So to reconcile with his bichda hua bhai, Lakshman, and the mother he never had, Ram visits Darjeeling, but he's there under cover. Apart from resolving domestic crises, he also has a task of national importance to perform. He has to protect the life of the Army Commander's daughter, Sanjana (Amrita Watch-Me-Be-Annoying Rao), who is under threat from a bitter one-time Army officer Raghavan (Suniel Shetty reunited with his wig).

The only way Ram can be close to both brother Lakshman (Zayed Still-Can't-Act Khan) and the boss' daughter is by playing a fellow college student. So he turns up on campus looking every bit the fossil he is. Of course, anybody would feel like a fossil amid such rabid fashion-consciousness.

This college is remarkable, not just for its rampant use of leather pants and bandanas, but also for its almost-stoned detachment from reality. Even for Bollywood, this is quite an achievement. Girls and boys skipping along corridors; either playing endless games of Truth or Dare or lurking in the corners just waiting to spring into dance.

And the teachers are equally bad: Satish Shah is a professor with great oratory skills, especially if you need to put out a fire. Boman Irani as the absent-minded principal doesn't really get a chance. Bindu is also wasted in a role which has her knitting sweaters and speaking broken English. And Sushmita Sen as the chiffon-clad chemistry teacher slithers sexily and unabashedly all over her desk, and is a tired formula if we ever saw one.

So there he is, Ram the nerd, who arrives on the scene and teaches them all to love and sing and be happy, all the while also saving their hides from Matrix-y gunshots. Thanks to Raghavan, a Paki-hating fanatic, everybody is on the hit-list, but nobody actually dies. Raghavan's problem in life is the Army Commander's (Kabir Bedi) patriotic Mission Milaap, which will release Pakistani prisoners of war as a gesture of peace.

When Raghavan is unable to get at Sanjana, he changes tactics and joins the college as a professor. And on prom night, he takes as his hostage the entire population of the college, including the principal and faculty. The action sequences are not half bad and finally, thanks to the heroic efforts of the, um, hero, everything works out like you expected, except the climax (which is actually kinda cool).

Main Hoon Na takes off in about 40 directions at once, but having 'something for everyone' in a country of one billion just results in a fantastically convoluted plot. But we've never cared about a plot with Hindi movies, and we're not going to start now. What ultimately sucks is that MHN promises you a fun ride, and while die-hard SRK fans might lap it up, the rest of us are going to just pretend this never happened.
Share. Save. Connect.
Tweet
MAIN HOON NA SNAPSHOT

See Main Hoon Na full details
MAIN HOON NA USER REVIEWS
1 - 11 OF 11 COMMENTS
POSITIVE  |  NEGATIVE |  NEWEST  |  OLDEST  |  MOST HELPFUL  |  LEAST HELPFUL
USER RATING
5.4
95 USERS
Performances
Script
Music/Soundtrack
Visuals
NA
NA
NA
NA
Can watch again - NA
Good for kids - NA
Good for dates - NA
Wait for OTT - NA
Yanet Novoa Alvarez on 29th Nov 2005, 5:16am | Permalink
I LOVE SHAHRUHK KHAN I LOVE
RATING
4
Ahsan Ali on 19th Jun 2004, 9:12pm | Permalink
main hoon na
RATING
10
Bhavana Prasad on 17th Jun 2004, 9:29pm | Permalink
its about teaching lesson to a younger bro. & carrying on duties as an elder brother especially of his father's quaish.
RATING
2
Vd Dd on 26th May 2004, 11:16pm | Permalink
The best movie
RATING
10
Rahul on 14th May 2004, 12:44pm | Permalink
Its bollywood at its age-old best... Beware of the not-cheesy-but-irritatingly-matrix fight scenes... The movie delivers EXACTLY what it promises.... relax, and enjoy some good old entertainment - Bollywood Ishtyle... hopefully this will be a trend that was long forgotten after the golden 70's.
RATING
6
Sdfdsf Fdfds on 11th May 2004, 1:23pm | Permalink
shah rukh is the best as well fara khan.
RATING
10
Greebo on 10th May 2004, 4:22pm | Permalink
Dear SASH HKG, a bad movie is a bad movie, hon. even if it IS a big hit. the herd, unfortunately, is not always right.
RATING
2
Sash HKG on 10th May 2004, 9:02am | Permalink
Now that the movie is a big hit, all these so called Movies Buffs (who probably can't tell cow dung from good cinema) can go take a hike up their own backsides.....
RATING
10
Chaitanya Psr on 2nd May 2004, 10:53pm | Permalink
its absolute shit and crap.i wont advise this movie even to SRK fans. forget about zayed and sushmita sen , they in no way are upto the mark.

If u r from hyderabad watcha low profile telugu movie instead of this lousy sick MHN. telugu movies atleast offer a pinch of comedy. bye.

RATING
2
Karthik Kotha on 1st May 2004, 10:40pm | Permalink
Not that bad a movie.Considering her first-time direction,Farah Khan did a pretty neat job.It reminds us more of the movies of the 1980's where hindi movies had everything from fights,action, dance,drama,romance and no logic.
RATING
2
Pained And Annoyed on 1st May 2004, 12:56pm | Permalink
ohmygod what a load of crap. dressed-up crap, but still crap. shahrukh khan (whom i love, by the way) does his almightily annoying quivering-lip thing again, his maa thing again, his messiah thing again, and just won't stop crying. haven't we taken this 'metrosexual man' thing a bit too far? the fellow won't bloody stop crying! someone tell me why he's whoring himself like this.

this movie wasn't even fun crap, man. it was just crap - and that's really quite inexcusable. i expected better from farah khan.

btw, this has to be first fair review that i've read. the movie's otherwise been praised to the heavens. thank you for having the balls to say what you (and a lot of us who aren't ad-dependent) really think.

ADVERTISEMENT
This page was tagged for
main hoon na movie in hindi mp4
main hoon na movie
main hoon na movie in hindi
Main Hoon Na full movie
main hoon na full movie in hindi
Follow @fullhyderabad
Follow fullhyd.com on
About Hyderabad
The Hyderabad Community
Improve fullhyd.com
More
Our Other Local Guides
Our other sites
© Copyright 1999-2009 LRR Technologies (Hyderabad), Pvt Ltd. All rights reserved. fullhyd, fullhyderabad, Welcome To The Neighbourhood are trademarks of LRR Technologies (Hyderabad) Pvt Ltd. The textual, graphic, audio and audiovisual material in this site is protected by copyright law. You may not copy, distribute, or use this material except as necessary for your personal, non-commercial use. Any trademarks are the properties of their respective owners. More on Hyderabad, India. Jobs in Hyderabad.