11:55 am: It's Friday morning again, and know what that means? It's time to check out the latest Bollywood offering - first day first show. The movie is forebodingly titled Kuch Naa Kaho - gulp, is it the director's hint to tell the critics to shut up? 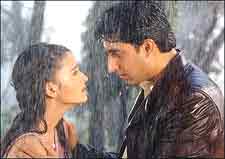 11:59 am: Foray into the theater armed with popcorn, a candy-bar and tons of hope. Why hope? The movie IS directed by Rohan Sippy, son of the maker of God-of-all-Hindi-films Sholay... and the movie DOES star Abhishek Bachchan, son of one half of the legendary Sholay twosome. Could we just expect some of the magic to be recreated - three decades down the line?

Noon: And so it begins... with extra-innovative title credits and a shot of Abhishek Bachchan stepping out of the shower. Umm, fresh start - and quite promising, too. 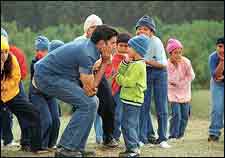 12:15 pm: Okay, the stage is set. Abhishek Bachchan turns out to be Raj, an NRI in New York, who is conned into attending his cousin's engagement in "India". The actual purpose of his visit is to get this comfortable-with-his-life bachelor get hitched to a desi girl - a plot engineered by his mom (Suhasini Muley) and mama (Satish Shah). Popcorn and plot - pretty stale so far.

12:16 pm: Time for the guy meets girl scene - set in an airport in New York. (Heard JFK Airport is one of the busiest in the world, but the lead pair seem to be the only passengers around. Hell, all is fair in love, war and romantic Hindi movies.) Enter stunning-as-ever Aishwarya Rai as Namrata - a fashion designer from India. First encounter - but no sparks fly. Thank Gawd not another love-at-first-sight story - even though the girl is Rai.

12:35 pm: Story hasn't progressed but two song-sequences have been played out. Also got to hear lots more music in the form of incessant mobile ring-tones, including Beyonce's new hit. Decided that songs in the movie are better. 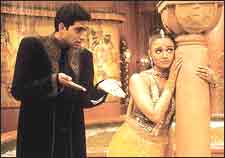 12:50 pm: Mom & mama's best laid plans seem to be working. Raj is forced into checking out a gaggle of eligible girls - with Namrata tagging along for company on every date. Finally, finally, Raj realizes that the fairest of them all has been right under his nose all along, and the deed is done - he falls for Namrata.

12:51 pm: Oops oops, the skies of lurrrr-ve ain't so clear after all. (Otherwise would it BE a Hindi movie?) It is revealed that (gasp) Namrata is the mother of a seven-year-old boy. Her hubby dearest? No ata-pata of him, he left her before the baby was born. "Yeh baat kuch hazam nahin hui!" yells whistling-type-fella from the back row. The fact that some guy was fool enough to leave Aishwarya Rai? Or the fact that she plays a mom? 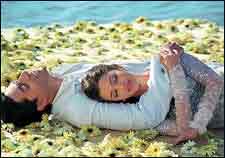 2 pm: Long time since last entry - and you thought because the movie's so gripping? Highlight of the last hour of proceedings: The Interval - for fresh popcorn and a chance to reflect on the happenings of the first half. Actually, not much has happened. Raj swallows his feelings for Namrata and begins to bond with her son Adi (Parth Dave). He takes to parenting like Ian Thorpe to water, and soon the boy is calling him Dad. Namrata pulls off a yes-no-yes-no routine - but a few catchy songs later she decides to remarry - Raj obviously being the chosen one.

2:01 pm: Uh-oh, another spoke-in-the-wheel, fly-in-the-soup and whatever else you can call the reappearance of Namrata's husband. (Won't spoil the surprise guess-appearance here.)

2:30 pm: Time for climax you think? Nope, Namrata's still deciding - current love Raj, or Sanjiv, the guy who left her for money and another woman seven years ago.

2:40 pm: Director finally decides that okay, he has to end this. In the backdrop of the forgotten cousin's wedding - the hum do, hamara ek parivaar is finally sorted out, the right dad is chosen by the kid and one guy makes the sacrifice. Movie over. Time to go home. 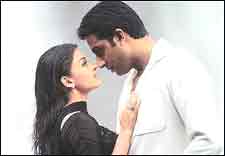 ADVERTISEMENT
This page was tagged for
kuch naa kaho movie
Kuch Naa Kaho hindi movie
Kuch Naa Kaho reviews
release date
Abhishek Bachchan, Aishwarya Rai
Follow @fullhyderabad
Follow fullhyd.com on
About Hyderabad
The Hyderabad Community
Improve fullhyd.com
More
Our Other Local Guides
Our other sites
© Copyright 1999-2009 LRR Technologies (Hyderabad), Pvt Ltd. All rights reserved. fullhyd, fullhyderabad, Welcome To The Neighbourhood are trademarks of LRR Technologies (Hyderabad) Pvt Ltd. The textual, graphic, audio and audiovisual material in this site is protected by copyright law. You may not copy, distribute, or use this material except as necessary for your personal, non-commercial use. Any trademarks are the properties of their respective owners. More on Hyderabad, India. Jobs in Hyderabad.