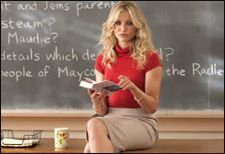 Nupur Barua / fullhyd.com
EDITOR RATING
6.0
Performances
Script
Music/Soundtrack
Visuals
7.0
6.0
5.0
6.0
Suggestions
Can watch again
Yes
Good for kids
No
Good for dates
Yes
Wait to rent it
No
Hollywood is, at present, saturated with comedies, especially of the romantic kind. Some of them make zero impact on the audience, some have their moments, and some are outrageously funny. Bad Teacher falls mid-way between the last 2 categories, and its biggest achievement at the box office was in Germany, where it pushed Kung Fu Panda 2 to second slot to become No. 1.

Elizabeth Halsley (Cameron Diaz) is an uncaring teacher who is about to quit to get married. After a touching farewell ceremony by the staff at John Adams Middle School (JAMS), Elizabeth returns to the house she shares with her wealthy fiancÃ©, only to find his mother adamant on breaking them up. Her gold-digging personality revealed, Elizabeth has no choice but to go back, reluctantly, to JAMS as a teacher, again.

This time, her "across-the-hall mate", the upright Amy Squirrel (Lucy Punch), makes it her mission to reform Elizabeth and make her a better teacher and person. Elizabeth ignores her, preferring to hang out with the meek Lynn Davies (Phyllis Smith), whom she treats like an errand boy.

Gym instructor Russell Gettis (Jason Segel) asks Elizabeth out often, but she turns him down because he does not have money. Elizabeth, Lynn and Russell become unlikely friends, and the manipulative Elizabeth continues to devise schemes to obtain more money for her dream boob job.

Trouble begins when Scott Delacorte (Justin Timberlake), the new sub teacher, enters the building. The enmity between Amy and Elizabeth attain new heights as they vie for young Scott's attention.

Education is always a touchy topic, and many movies have attempted to stress the importance of a good teacher in a student's formative, impressionable years. Bad Teacher, in comparison, is unapologetic about the pot-smoking, alcohol-consuming (in class), swearing teacher that Cameron Diaz plays so perfectly. Elizabeth uses her charm when needed, but is otherwise quite the unlikeable, smug, selfish, callous young woman.

Even towards the end of the movie, she does not really change - there is no taming of the shrew here - nor does she reach self-realisation, but things somehow work out. This has to be one of Cameron's finest performances, and a far cry from the loud characters she has played in the past.

Jason Segel could have done with some more screen-time. He is instantly likeable, and you find yourself rooting for him to get the girl, even as you know that he deserves better. Justin Timberlake, after playing the shrewd Sean Parker in The Social Network, is convincing as the not-so-smart educator, who seems to have no set opinions of his own.

Phyllis Smith is a delight to watch, although you have to strain a bit to hear her mumbled dialogues. John Michael Higgins is perfect as the fuzzy Principal.

It is Lucy Punch who outshines all of them, though. She is smart, funny, insecure, smug, evil and sympathetic, and a control freak. Cameron Diaz could not have asked for a better antagonist.

The language makes it an adult movie, and maybe that is just as well - you wouldn't want your kids to appreciate a teacher who does not know how and what to teach.

An ordinary movie, with fewer funny moments than it should have had, Bad Teacher is worth one watch, at least to break away from the monotony that other releases have imposed on us over the past few weekends.
Share. Save. Connect.
Tweet
BAD TEACHER SNAPSHOT

ADVERTISEMENT
This page was tagged for
Bad Teacher english movie
Bad Teacher reviews
release date
Cameron Diaz, Jason Segel
theatres list
Follow @fullhyderabad
Follow fullhyd.com on
About Hyderabad
The Hyderabad Community
Improve fullhyd.com
More
Our Other Local Guides
Our other sites
© Copyright 1999-2009 LRR Technologies (Hyderabad), Pvt Ltd. All rights reserved. fullhyd, fullhyderabad, Welcome To The Neighbourhood are trademarks of LRR Technologies (Hyderabad) Pvt Ltd. The textual, graphic, audio and audiovisual material in this site is protected by copyright law. You may not copy, distribute, or use this material except as necessary for your personal, non-commercial use. Any trademarks are the properties of their respective owners. More on Hyderabad, India. Jobs in Hyderabad.