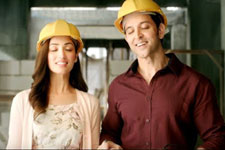 Ajay Kumar R / fullhyd.com
EDITOR RATING
7.0
Performances
Script
Music/Soundtrack
Visuals
8.0
6.0
7.0
8.0
Suggestions
Can watch again
No
Good for kids
No
Good for dates
No
Wait for OTT
No
Fiza, Mission Kashmir, and, after a long pause, Kaabil. The very kaabil Hrithik Roshan's serious-thriller career gets a long-overdue slingshot after 17 years. Releasing the same day as Raees, Sanjay Gupta's and Rakesh Roshan's emotional and nerve-wracking venture is a grisly, gutsy, edgy and satisfying alternative, especially for those who waited in long queues to catch SRK but ended up with just its reviews. Apart from bringing the mettle of the much younger Hrithik Roshan back to the fore, it gives you nail-biting moments that make your pulse stand still for a couple of seconds before it goes berserk.

Rohan Bhatnagar (Hrithik Roshan), a blind talented voice-artist for cartoons, marries Supriya (Yami Gautam), a pianist and music teacher, also blind. Theirs is a fairytale love story based on empathy, care and compassion. The newly-weds' lives are however shattered after local ruffians Amit Shellar (Rohit Roy) - the brother of corporator Madhavrao Shellar (Ronit Roy) - and his friend sexually assault Supriya twice - once after Rohan slaps Amit for teasing her and the other time for filing a rape case (which is rejected by the cops).

Devastated that their married life is never going to be the same again, Supriya takes her own life. And Rohan, who loses faith in the justice system after a vain dalliance with it, sets out to seek revenge for the brutal incident. Using all the skills at his disposal including his almost superhuman senses and military-style combat skills, he sets out on a rampage against the Shellars with psychopathic precision. But in the path of vengeance, he becomes an anti-thesis of himself - a ruthless and unforgiving anti-hero. But it's hard to hold this point against the movie, because the creators restrict themselves to telling you someone's story instead of giving you a life lesson.

Yami Gautam plays her part naturally without much effort, but appears too strong for a person who has gone through a tragic and spine-chilling incident, which can be a tad unsettling. Trying to justify that as that is just how her character arc is might be grasping at straws. Still, Kaabil is a love story that eventually morphs into a thriller, and Gautam's performance sets the stage for that.

Ronit Roy, his back stiff as an arrow, portrays the cruel and hardened power-hungry politician Madhavrao Shellar and a vengeful father to Amit Shellar, brilliantly. His performance empowers that of Hrithik. His expressions invoke anger and sympathy at the same time. Rohit Roy (Ronit Roy's real-life brother), who plays Amit, invokes even more rage than Ronit does, and makes the movie more immersive. He adds the right amount of dark humour to the genre. Narendra Jha, the Chief Inspector, is calculating but not cold. He epitomizes a corrupt officer trying to do a few better deeds, well.

An item song by Urvasi Rautela looks totally out of place, given the mood and theme of the movie.

The film doesn't rely on its lead actor and performances alone. The sets reflect both dark and light tones. An abandoned dreadful bar/theatre, a grim-looking godown that can pass off for TV-series Dexter's kill-room, a creepy under-construction building with trap holes (elevator shafts) placed strategically etc. brilliantly frame the hero's pursuit of vengeance. Sudeep Chatterjee and Ayananka Bose enhance the production values by rendering an amalgamation of Befikre- and Kahaani-like cinematics, and create a mood that matches up to those of many acclaimed noir movies.

Salim-Sulaiman's and Rajesh Roshan's ensemble fuses Carribean music with contemporary Bollywood tunes to render both the necessary amounts of romantic flavour and oodles of tension when required.

Kaabil has most of the right ingredients for a thriller - a cerebral protagonist, clever fight sequences, some scattered wit, brilliant casting and immersive screenplay among others. The fight choreography and methodologies, and Rohan's whole blind-fighter role have the bearing of Daredevil or Batman. A little meandering in the direction in the second half, the pointless item number and some holes in logic at the end spoil what might otherwise been a remarkable film, but Kaabil is still worth a one-time watch.
Share. Save. Connect.
Tweet
KAABIL SNAPSHOT 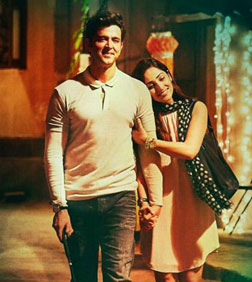 ADVERTISEMENT
This page was tagged for
Kaabil hindi movie
Kaabil reviews
release date
Hrithik Roshan, Yami Gautam
theatres list
Follow @fullhyderabad
Follow fullhyd.com on
About Hyderabad
The Hyderabad Community
Improve fullhyd.com
More
Our Other Local Guides
Our other sites
© Copyright 1999-2009 LRR Technologies (Hyderabad), Pvt Ltd. All rights reserved. fullhyd, fullhyderabad, Welcome To The Neighbourhood are trademarks of LRR Technologies (Hyderabad) Pvt Ltd. The textual, graphic, audio and audiovisual material in this site is protected by copyright law. You may not copy, distribute, or use this material except as necessary for your personal, non-commercial use. Any trademarks are the properties of their respective owners. More on Hyderabad, India. Jobs in Hyderabad.