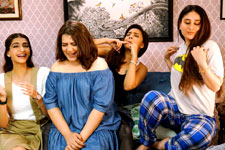 T J Reddy / fullhyd.com
EDITOR RATING
3.5
Performances
Script
Music/Soundtrack
Visuals
7.0
2.0
3.0
5.0
Suggestions
Can watch again
No
Good for kids
No
Good for dates
Yes
Wait for OTT
Yes
The first part of this review is brought to you by Sony. Yes, ladies and gentlemen, with product placement you can make a movie as good or as bad as you want but never have to worry about recouping your production costs. Veere Di Wedding is a "movie" whose ads are interrupted by an occasional break to add in a scene or two. During the course of this film, you will see Bentley-driving ladies shamelessly promote Uber (in one scene), multi-millionaires eating Amul ice cream, and Apple and Samsung, finally, getting along. Because why fight when the audience is paying to watch us take one of our expensive holidays?

Veere Di Wedding is one such vanity-fuelled holiday. Shashanka Ghosh's movie follows the girl gang comprising of Avni "The Nerd" Sharma (Sonam Kapoor), Kaalindi "The Hot" Puri (Kareena Kapoor), Sakshi "The Brat" Soni (Swara Bhaskar) and Meera "The Heavy" Sood (Shikha Talsania) as they converge from four corners of the globe to make themselves a part of Kaalindi's wedding. Each of them is going through first-world problems of their own, and you bet they'll find quick-fix solutions to all of them within the movie's runtime.

This section of the review is NOT sponsored by subtlety. Have you ever felt people never understood how you really feel? Do you feel like people can't read your facial expressions and body language? Do you feel the only way out of this is to spell out every single aspect of your life and condense complex emotions into easily consumable bits and pieces? If the answer is a resounding YES, you have fallen victim to subtlety. Yes, subtlety. The one quality both Veere Di Wedding and our review of it don't have. Observe how easy everything is with that outdated product scrubbed from your TV, cinema and computer screens.

Indeed, Veere Di Wedding prioritizes ease above all else. The four main characters and every single one of their conflicts are spelt out to you word for word, all the while surrounded by impeccable makeup and designer clothes.

More on that latter bit. Echoing Jordan Belfort's sentiments from The Wolf Of Wall Street, everything looks better when you're rich. Even your grief looks better because when you're rich, you don't tear up and ruin your mascara. You don't wear sweatpants or have bad hair days because your look matters above all else. It doesn't matter if you're nerdy, cool, promiscuous or heavy, there is a designer for each and every one of you. And, finally, when you're rich you remember and honour your loved ones by wearing a slightly less extravagant lehenga and holding a wedding that costs 1.9 crores instead of 2 whole crores. All of this could be yours provided you have some very rich parents and do very little except for party all the time and complain when the party stops.

The fact that the movie low-balls every single one of its plot points takes the quirk away from its characters and makes their conflicts and resolutions meaningless. We know this is a mainstream chick flick and not an indie darling a la Lipstick Under my Burkha, but these two movies are more similar than they seem on the surface. They set their sights at telling stories about women but one of them is not like the other. A glam-filled world and a housing colony both share one common aspect - people. And people have stories. People and their stories can be interesting or mundane depending on how well they are assayed. Basic tenets of storytelling don't disappear simply because you choose to make a "commercial" movie.

The four leading ladies and their army of co-stars have all been exceptional in other movies, and they are not the problem here. They are likeable, charming, funny and watchable, but are not in any way relatable or memorable (if it weren't for those pesky universal aspects of life known as friendship and marriage).

Aaron Sorkin once said that a character's journey is compelling only when the obstacle preventing him/her from reaching his/her destination is compelling as well. Some of the movie's antagonists are a husband who caught his wife jilling off, a trio of judgemental aunties, and two dads and a mom who love their daughters but can't bring themselves to say it. None of these issues is given even time to develop and in turn be compelling, and all loose ends are tied together at the end because, well, "movie".

This final section of this review is brought to you by the duo of clichés and stereotypes. Ask yourself, where would you be without clichés and stereotypes? Spending more time with your fellow man to understand their standpoints and making yourself a well-informed individual? F**k that. Isn't the comfort of predicting what comes next all you need? Isn't putting people in a well-designed box what you crave? If you do, this movie is bound to leave you satisfied (unlike it's carnally unsatisfied protagonists - they said it, we didn't).

The thing about clichés is, people are privier to them than moviemakers sometimes realize. This film's target audience knows that women curse, have sex, smoke, drink, party, curse some more, have some more sex, and can be as dirty as men when it comes to their raunchy comedies. The target audience has watched Bridesmaids, The Heat, Mean Girls, Clueless, Sex And The City, Sisterhood Of The Travelling Pants, Girls Trip, Rough Night and so many more movies of the ilk.

So no amount of glossy sets and peppy tunes can make an audience forget that they've seen this movie and these characters many times before. The songs are still loud, the choreography is still questionable, the costumes are still gaudy, the plotlines are still half-baked, and the stereotypes are still reinforced. Does the movie get a pass simply because it stars women and they are ones indulging in bad moviemaking instead of the boys? No madam, it does not.

That being said, that one uncle in my hall who clearly never watched any of the aforementioned movies enjoyed the hell out of this one even though the silence from his wife's side was deafening. Make of that what you will.
Share. Save. Connect.
Tweet
VEERE DI WEDDING SNAPSHOT 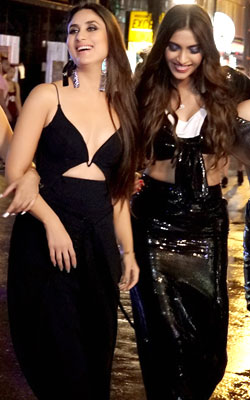 ADVERTISEMENT
This page was tagged for
Veere Di Wedding hindi movie
Veere Di Wedding reviews
release date
Kareena Kapoor, Sonam Kapoor
theatres list
Follow @fullhyderabad
Follow fullhyd.com on
About Hyderabad
The Hyderabad Community
Improve fullhyd.com
More
Our Other Local Guides
Our other sites
© Copyright 1999-2009 LRR Technologies (Hyderabad), Pvt Ltd. All rights reserved. fullhyd, fullhyderabad, Welcome To The Neighbourhood are trademarks of LRR Technologies (Hyderabad) Pvt Ltd. The textual, graphic, audio and audiovisual material in this site is protected by copyright law. You may not copy, distribute, or use this material except as necessary for your personal, non-commercial use. Any trademarks are the properties of their respective owners. More on Hyderabad, India. Jobs in Hyderabad.