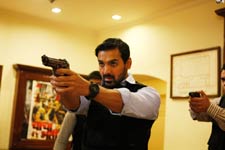 Neha Mathur / fullhyd.com
EDITOR RATING
8.0
Performances
Script
Music/Soundtrack
Visuals
7.5
7.0
8.0
8.0
Suggestions
Can watch again
Yes
Good for kids
No
Good for dates
No
Wait to rent it
No
Filmmaker Shoojit Sircar does it again. The man in question gave us last year's fun romp, Vicky Donor, but what many forget is his debut feature, Yahaan, a love story set in the volatile valley of Kashmir. The film captured the abject paralysis of the locals caught between gunfire and encounters, without ever glorifying militarism or taking sides. Madras Café, a gritty and candid espionage drama/thriller, shines through similarly, for its nuanced depictions and nonpartisan treatment.

A spy thriller in mainstream Bollywood can swiftly devolve into a romance wherein a deadly political backdrop is used merely as a convenient crutch to prop the love story and its incumbent love songs (Ek Tha Tiger). Or it can become that dressed-up flick where, eventually, style rather than story dominates the action on screen (Agent Vinod). Madras Café is neither of the two.

Here is a taut script based not on fantasy (this is no Bond film), but on the severe reality of an armed struggle by a separatist outfit, and the military operations to squelch it. Madras Café revisits and reconstructs a specific period from the ethnic civil war of the 1980s in Sri Lanka.

It traces the deepening hostility between the Sri Lankan Tamil nationalists (called LTF in the film) and the Indian Peace Keeping Force, triggered by the signing of the Peace Accord between India and Sri Lanka and culminating in the assassination of an unnamed ex-Prime Minister (whom we know as Rajiv Gandhi) in 1991.

Major Vikram Singh (John Abraham), briefed by competent R&AW chief Robin Dutt (Siddharth Basu) to head covert operations in Sri Lanka, arrives in Jaffna in the midst of brutal ethnic strife. Our officer-turned-agent must aid in the attainment of peaceful provincial elections, and to do so, he must negotiate with the rebel groups. Easier ordered than done.

Travelling by the same boat as Vikram is war correspondent Jaya Sahni (Nargis Fakhri). Along with these two protagonists, the viewer is introduced to the raw, war-torn landscape of Sri Lanka - brutalized civilians, smoke-filled skies intruded by helicopters, and army greens populating an otherwise desolate city. Camerawork by the brilliant Kamaljeet Negi lends incredible authenticity to the dramatic proceedings.

Some scenes of the film resemble war footage, stark and earthy, but always without being overly gruesome. Whether the frames of guerrilla warfare and blasts in the jungles, the shots of boats crossing the silent seas, or background detailing using profuse waterfalls, the cinematography is perceptive, and the visuals, convincing.

The same can be said for the screenplay, written by Somnath Dey and Shubendu Bhattacharya, that injects a credible realism into the film. The build-up to the assassination ties together many threads, creating a web of political motives and conspiracies that never spiral out of control.

Madras Café is not a fast-paced, jaw-dropping thriller as is expected from the genre. On the contrary, some might find it underwhelming in the first half. The urgency is highlighted in the last 20 minutes of the movie rising in crescendo with the nearing assassination.

Rest assured, this understated film is cerebral, and refuses to piggyback on unnecessary twists and turns. The narration is never melodramatic, not even when depicting the merciless deaths of its characters.

Though Sircar's film does not dwell on deaths, it does dwell on the futility of endless warfare. It does so in an unbiased manner, never lionizing or demonizing any of the protagonists. Hurting the wretched of the land in the name of political warfare seems fruitless, and Shantanu Moitra's haunting background score punctuates the senselessness of it all.

John Abraham delivers a steady and solid performance, though one cannot avoid the fact that his skill is bolstered by the able performances of the other characters.

Nargis Fakhri as the London-based journalist, roughing it out in the field, is a vast improvement on her Rockstar poker face. Actors Siddharth Basu as R&AW Chief Robin Dutt, and Prakash Belawadi as Vikram's senior Bala, ace their respective roles. Newcomer Raashi Khanna, who plays Vikram's wife, does justice to her minor role.

No battle cries, no songs. Madras Café is a well-researched dialogue on the world of intelligence communities and their tapped intercepts, changing loyalties and new alliances. Most noticeably, it is a commentary on how easily the defense of nationhood and the idealism of separatist politics dissolve into mass murder.
Share. Save. Connect.
Tweet
MADRAS CAFE SNAPSHOT 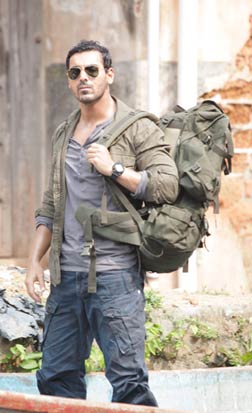 ADVERTISEMENT
This page was tagged for
Madras Cafe hindi movie
Madras Cafe reviews
release date
John Abraham, Nargis Fakhri
theatres list
Follow @fullhyderabad
Follow fullhyd.com on
About Hyderabad
The Hyderabad Community
Improve fullhyd.com
More
Our Other Local Guides
Our other sites
© Copyright 1999-2009 LRR Technologies (Hyderabad), Pvt Ltd. All rights reserved. fullhyd, fullhyderabad, Welcome To The Neighbourhood are trademarks of LRR Technologies (Hyderabad) Pvt Ltd. The textual, graphic, audio and audiovisual material in this site is protected by copyright law. You may not copy, distribute, or use this material except as necessary for your personal, non-commercial use. Any trademarks are the properties of their respective owners. More on Hyderabad, India. Jobs in Hyderabad.