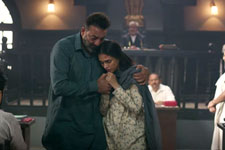 T J Reddy / fullhyd.com
EDITOR RATING
3.0
Performances
Script
Music/Soundtrack
Visuals
6.0
2.0
2.0
3.0
Suggestions
Can watch again
No
Good for kids
No
Good for dates
No
Wait for OTT
Yes
Bollywood loves a good comeback story. Be it the fictional one of a downtrodden citizen getting even with his/her wrongdoers or the real-life tale of a man looking to re-establish himself in his field after atoning for his sins by spending a few years in prison. Sanjay Dutt who was last seen on screen in 2014's PK ticks both the aforementioned boxes as he half-drunkenly purrs back to the silver screen with Bhoomi, a film whose look, feel, tone and enjoyability with its bad guys and their weapons are all products of the good old days of Dutt's youth.

As Bollywood continues to recycle itself by mining the '70s and '80s for stories, you needn't look too far to find a myriad of pseudo-feministic rape-revenge thrillers released in recent times. After Mom, Maatr and Kaabil, the template Bhoomi ends up following is so well and truly set that my description of its plot would be classified as a needless exercise performing which I, personally, deem to be an insult to the fine readers of our site. You ladies and gentlemen are more than capable of discerning the premise for yourselves by merely glancing at the film's poster.

Rapists = bad and poor man = good are go-to tropes used to manipulate an audience into empathizing with characters devoid of character, but what seamlessly blends Bhoomi with its less-than-impressive predecessors is its tone-deaf, cash-hungry approach to the subject matter at hand, the unabashed and uncaring style with which the plot progresses, and its usage of words such as "virgin" and "characterless" while describing a girl which are bound to leave those socially conservative audience members righteously indignant.

While my word might not be the most prudent while discussing the horrors of sexual abuse, I put a whole host of weight behind my opinions when it comes to the horrors of derivative and boring cinema. Like most films before it, Bhoomi revels in its lack of nuance while wearing its pandering nature as a badge of honour.

While not the gold standard, the film Pink took its time as it etched out mostly three-dimensional and complex characters to aid its narrative of showing the injustices faced by a trio of females over the course of one instance and by and large, in their lives. On the contrary, Bhoomi hobbles its characters with needless lisps and endless poverty as it refuses to build them by their actions instead substituting that with a semi-urban Agra where the law of the land isn't much different from that of a khaap panchayat.

While every one of those films mentioned in paragraph two of this review has at least one sequence that adequately illustrates the powerlessness, fear and primal horror being subject to sexual abuse entails, Bhoomi does not realise that upping the ante is not the preferred method of storytelling while handling sensitive subject matter. An unapologetically concerning scene depicting the assault of Bhoomi (Hydari) which is set in a movie theatre playing a B-grade porno could be classified as the thesis for every single thing wrong with the film. The disturbingly crass levels of male gaze saturating the movie forms but a part of its overall unsavoriness, as the movie falls dismally short at tastefully building human relationships or emotional stakes.

From featuring moronic bad guys playing hide-and-"cheek" with random women to showcasing court proceedings devoid of physical evidence examination, the film chugs along on its way to give the audience what it thinks they came for - the expunging of a few men from their mortal state by a grizzled Sanjay Dutt.

Dutt and his co-stars try painstakingly hard to present themselves and the film they are a part of as legitimate commentary on modern society. The intense close-ups they are shown in while spouting dialogues laced with life-or-death stakes should make for engaging viewing, but little do they know that they are a part of a movie whose delivery is so bland that most audiences could skip entire scenes of the film and rarely if ever miss a beat.

There is a popular belief amongst screen writers that "the animal cracker" scene in the film Armageddon is an accurate illustration of what makes for bad writing in a film. That scene acts as needless filler where the audience is not made privy to any information about the characters or the progression of the story at large. A scene like that is added only to pad the runtime of a film which is achingly short of material to explore. Bhoomi contains a litany of such sequences.

The law of diminishing returns dictates that the effect experiences such as Bhoomi have on the audience will be considerably reduced as they are subject to similar stories on a near monthly basis. Movies like this reaffirm my concern that while attempting to magnify oft-neglected injustices in the society, they often normalise these atrocious acts by keeping the audience comfortably numb with their paint-by-numbers narratives. While I try to keep my flag of disdain for such material flying high, I am but mortal. Both my patience and anger will be drowned out by homogenised cinema sooner than later, and I will be but a bystander as irresponsible cash grabs like this one continue to live on long after the death of my sentiments.
Share. Save. Connect.
Tweet
BHOOMI SNAPSHOT 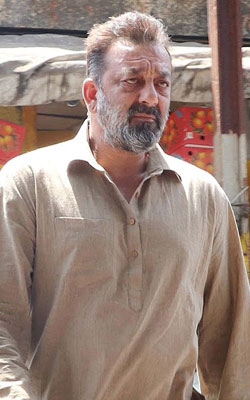 If fullhyd ever started their YouTube channel, you best be sure that we'd be all over it with our reviews.
Hari on 23rd Sep 2017, 6:57am | Permalink
Wholeheartedly agree with The Common Movie Goer. This is a brilliant read TJ. Very well analyzed. This somehow reminded me of movies RP Patnaik makes. Happened to watch Manalo Okkadu recently (don't ask me why !!!). That's a lousy movie - badly acted, written and directed. We are supposed to be outraged about the injustices of media but a movie needs to be engaging and have basic structure to make us sit and think.Just throwing the current hot issue on screen is nothing but a money grab. These sad efforts trivialize serious issues.

"Movies like this reaffirm my concern that while attempting to magnify oft-neglected injustices in the society, they often normalise these atrocious acts by keeping the audience comfortably numb with their paint-by-numbers narratives."

Totally agree with you on this, TJ! Great review. Keep em coming.

ADVERTISEMENT
This page was tagged for
bhoomi hindi movie
bhoomi movie in hindi
Bhoomi hindi movie
Bhoomi reviews
release date
Follow @fullhyderabad
Follow fullhyd.com on
About Hyderabad
The Hyderabad Community
Improve fullhyd.com
More
Our Other Local Guides
Our other sites
© Copyright 1999-2009 LRR Technologies (Hyderabad), Pvt Ltd. All rights reserved. fullhyd, fullhyderabad, Welcome To The Neighbourhood are trademarks of LRR Technologies (Hyderabad) Pvt Ltd. The textual, graphic, audio and audiovisual material in this site is protected by copyright law. You may not copy, distribute, or use this material except as necessary for your personal, non-commercial use. Any trademarks are the properties of their respective owners. More on Hyderabad, India. Jobs in Hyderabad.