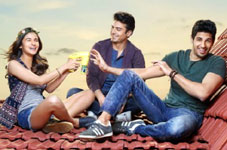 Zehra Abbas / fullhyd.com
EDITOR RATING
8.0
Performances
Script
Music/Soundtrack
Visuals
8.0
8.0
5.0
8.0
Suggestions
Can watch again
Y
Good for kids
Y
Good for dates
Y
Wait for OTT
N
Remember watching Kabhi Khushi Kabhi Gham all those years ago and asking yourself - who are these people? Back then, "it was all about loving your parents". Fifteen years later, Dharma Productions has realized that it sorely needed this addendum - "warts and all". That realization has resulted in Kapoor And Sons; the most relatable and natural film to come out of the Johar stable.

Dadu's (Rishi Kapoor) heart attack brings grandsons Rahul (Fawad Khan), a successful novelist, and Arjun (Siddharth Malhotra), a part-time bartender and also a struggling novelist, back to the family home in Coonoor. Despite the heart attack, it quickly becomes apparent that Dadu is the healthiest individual in this family while Rahul, Arjun and their parents (Rajat Kapoor and Ratna Pathak Shah) struggle with diseased relationships.

Kapoor And Sons has a lot going for it. The film has a good script that offers wonderful roles to all six of its principal actors. The actors - newbies and veterans alike - all bring sensitive nuances to their roles. There aren't any distractions from their performances thanks to competent direction by Batra, as well as clever editing that helps the 2-hour-plus duration speed by. The production values are thankfully realistic - no castles or manors, no Bentleys or Louis Vuitton.

This lovely story is also given a quaint sense of place due to the setting in Coonoor, a welcome desi break from the impossibly perfect beauty of handpicked foreign locations. Jeffrey F. Bierman's cinematography gives you one magnificent visual after another, subtly reiterating the underlying "life is beautiful" theme even when the Kapoor family goes through its darkest times.

However, the film's strongest suit is its perceptive portrayal of real life themes that you and I and that eskimo in his igloo can all relate to. It deals with parental partiality, sibling rivalry, unhappy marriages, infidelity, love, forgiveness and healing. Seems like a lot? It is, but all of the film's elements fuse together to create a product that is thought-provoking, emotionally resonant, and most importantly, not overly dramatic or preachy.

It's interesting how Fawad Khan's and Siddharth Malhotra's real life personas have been used to lay the basic groundwork for their characters. The former plays the assured, successful, cool and charming elder brother while the latter portrays the struggling, unsure and vulnerable younger sibling. However, as their characters develop, Khan steals the show. He's adept at shifting gears effortlessly - one moment the voice of reason, calming his squabbling parents, not taking sides, and the next lashing out at his brother in a fit of all-too-human frustration. When this life of this "perfect son" unravels suddenly, his emotionally evocative but restrained portrayal is commendable. Malhotra shows growth, but he lacks Khan's gravitas. Still, this is one of his better performances.

Rajat Kapoor and Ratna Pathak Shah do such a brilliant job of portraying an unhappy couple that you find yourself tensing up during their interactions in public, and feeling real sadness for them when they pore over their honeymoon pictures. Daily frictions - electricity bills, plumbing, money trouble, taunts during arguments - serve as the precursor to a more sordid problem - suspected infidelity - and it is testimony to these actors' talents that, like their children Rahul and Arjun, you, too, will be unable to pick sides.

Though they cause very real harm to their family, Kapoor and Shah ensure that you feel compassion for their characters' unthinking partiality or their inability to recalibrate their attitudes towards their grown-up children. Their greatest win, however, is subtly conveying the truth that parents too make terrible mistakes because they, too, are still learning.

Kapoor And Sons takes another family-values staple - respect for elders - and gives it a twist. Indeed, it is Dadu whose nonagenarian wisdom ultimately prevails but this grandpa hides joints in his room, leers over Mandakini on his iPad (or iPapad as he calls it), and spits out sugar-free cake and asks "Cake hai ya potty?" Rishi Kapoor's prosthetics look a bit false, but there are no false notes in his performance. Admittedly he plays a type - the feisty grandpa - but he plays it well. His standout scene is a direct, no bullshit appeal to the grandsons at the end that will touch that special place in the heart reserved just for family.

If Dadu is the ray of sunshine in this Coonoor story, then Tia (Alia Bhatt) is the bubbling brook that runs through it. She is a natural actor and is a treat in every frame that she occupies, and you wish that she had a more substantial role. The romantic subplot that revolves around her (and is thankfully not a traditional triangle) is refreshing in its toned down and realistic treatment of mutual attraction, courtship and complications. Millennials will approve.

What doesn't work too well is the climax when the film tries to resolve all of its various conflicts all at once. It feels oddly forced, and even more so because it plays out too slowly. Another drawback in Kapoor And Sons is the average music - "Ladki Chul" is a catchy number, but it will stay in your mind only as long it is on the radio. This might not seem like a significant disadvantage till you think of all the great soundtracks of the past, and realize how the right score or even one soulful number can deepen not just your experience of a cinematic product, but also leave an indelible memory. Pity.

Overall, Kapoor And Sons is an entertaining and touching film about our closest relationships, and the inevitable pain that arises from such closeness. However, it saves its most important message for its most attentive viewers - healing is ultimately a choice.
Share. Save. Connect.
Tweet
KAPOOR & SONS SNAPSHOT 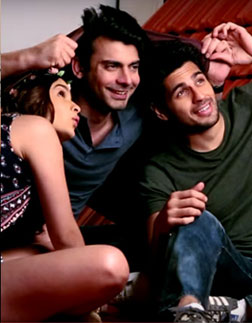 ADVERTISEMENT
This page was tagged for
Kapoor & Sons hindi movie
Kapoor & Sons reviews
release date
Fawad Khan, Siddharth Malhotra
theatres list
Follow @fullhyderabad
Follow fullhyd.com on
About Hyderabad
The Hyderabad Community
Improve fullhyd.com
More
Our Other Local Guides
Our other sites
© Copyright 1999-2009 LRR Technologies (Hyderabad), Pvt Ltd. All rights reserved. fullhyd, fullhyderabad, Welcome To The Neighbourhood are trademarks of LRR Technologies (Hyderabad) Pvt Ltd. The textual, graphic, audio and audiovisual material in this site is protected by copyright law. You may not copy, distribute, or use this material except as necessary for your personal, non-commercial use. Any trademarks are the properties of their respective owners. More on Hyderabad, India. Jobs in Hyderabad.