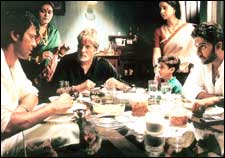 EDITOR RATING
7.0
Performances
Script
Music/Soundtrack
Visuals
NA
NA
NA
NA
Suggestions
Can watch again
NA
Good for kids
NA
Good for dates
NA
Wait for OTT
NA
Think of a man who rules Mumbai using force, who operates outside the perimeter of the law, who appoints a crony for chief minister, who smears vermilion and rolls rudrakshas, and who can make the city burn if he wishes. Who does that remind you of? Nobody in particular? Well, Sarkar bears too much of resemblance to that nobody in particular.

It also glorifies him. Whether that is good or bad is for you to decide. For example, we at fullhyd.com believe that all such people should be glorified. Nothing like taking some decision. There's a whole world out there to then write their stupid editorials.

Ram Gopal Varma's umpteenth take on the underworld - Satya, Company and D later - suffers mostly from a lack of judgement. Choosing his protagonist to clearly resemble a certain someone who is most famous for rabble-rousing speeches and for once replacing a minister of his party from the Union Cabinet for being "too honest", and portraying such a man as a self-effacing saint, cannot make for a scroll of scholastic heraldry. It being a well-made movie therefore becomes an unfortunate fact, since a lot of people are going to watch it.

Sarkar is an engaging closet peek into the life of a muscleman. To the people on the fringe of society who don't count except in the census, musclemen are a lot like God - the first time they help you out of a desperate situation, you swear unquestioning loyalty for life, and never hear an argument against. And thus, Subhash Nagare (Amitabh Bachchan), alias Sarkar, has a huge following among the slumdom of Mumbai, the people who actually go out to vote. He's dedicated his life to taking care of them, though through his own means.

With a cosy family, consisting of his wife, sons Vishnu (Kay Kay) and Shankar (Abhishek Bachchan), and Vishnu's wife (Rukhsar) and kid, he lives in his fortress guarded by a fiercely loyal army of goons.

Shankar, just in from the US, wants to go back there with Pooja (Katrina Kaif) to start a consulting firm. Vishnu is the heir apparent, but also the enfant terrible, and falls foul of his principled dad when he kills the boyfriend of a girl he's growing fond of against her wishes. He has to leave home, and even go underground when Sarkar promises protection to the girl who wants to testify.

At the same time, Sarkar makes enemies of Rashid (Zakir Hussain), a fugitive who approaches him for help in smuggling drugs into the country, and not only gets spurned but warned against doing the sin. The wages of the sin are however too high for Rashid, and he teams up with Selvar Mani (Kota Srinivasa Rao), an apprentice don who owes allegiance to Sarkar but who is nettled with the viscous influence of Sarkar's ethics on his own business interests, and with Vishram Bhagavat (Raju Mavani) and a Swami (Jeeva), to eliminate Sarkar.

Rashid and the insidious Swami machinate cleverly to split Vishnu from the family and then get Sarkar in jail. Sarkar's larger-than-life shoes have now to be filled by Shankar, whose opening gambit sees him narrowly escape death from Rashid in a rather less-than-sublime sequence, to bring Sarkar out of jail and take the battle into the enemy's field. Becoming a mob kingpin cannot come without its price, though - he has to kill his own brother, and break up with a disillusioned and recalcitrant Pooja. The payoff, though, is the family jewel back in the safe - reign over Mumbai.

The vitriolic comparisons with The Godfather are inevitable, especially with Varma himself going out to town claiming inspiration. Most of India however hasn't seen The Godfather, and it's a pretty carry-the-water-bag exercise to take notes. Forgetting it's a Varma product, forgetting he's made such stuff before, and looking at this as just another film, it certainly comes out at the long end.

All the staple of a Varma film - whiplash editing, sepia-and-tint production values, pithy dialogue and a scorching background track - comes riding in this one on star power. Amitabh Bachchan broods with the right intensity to complement the characterization of a war-ravaged messiah who weighs God as mostly inconsequential in his scheme of things. Abhishek Bachchan is slowly coming into his own. Kay Kay as Vishnu and Kota Srinivasa Rao as Selvar Mani are among the other performances that help grade this film. Katrina Kaif has nothing to do, and does it.

Sarkar doesn't have enough meat or caviar canape for a full film - it's like an incident in the life of the man being filled out into 2 hours. To start with, there isn't much sketching in the characterization of the old don - the film doesn't have him displaying any of the intellect, muscle or high-rolling that must have taken him where he is, resulting in just a silhouette of a protagonist.

Then, the evolution of the greenhorn son who's had only the gravy of life so far, into the wiry man of all parts that the Sarkar needs to be, seems to happen over a skateboard rather than over the wicked badlands of mobdom. Considering that when you cut to the bone, this is the story of the rise of the next Sarkar, that's a surprising detour from the real challenge that the material offers.

All in all, though, this is certainly worth a watch, if only for Varma's skill at showcasing.
Share. Save. Connect.
Tweet
SARKAR SNAPSHOT

ADVERTISEMENT
This page was tagged for
Sarkar hindi movie
Sarkar reviews
release date
Amitabh Bachchan, Abhishek Bachchan
theatres list
Follow @fullhyderabad
Follow fullhyd.com on
About Hyderabad
The Hyderabad Community
Improve fullhyd.com
More
Our Other Local Guides
Our other sites
© Copyright 1999-2009 LRR Technologies (Hyderabad), Pvt Ltd. All rights reserved. fullhyd, fullhyderabad, Welcome To The Neighbourhood are trademarks of LRR Technologies (Hyderabad) Pvt Ltd. The textual, graphic, audio and audiovisual material in this site is protected by copyright law. You may not copy, distribute, or use this material except as necessary for your personal, non-commercial use. Any trademarks are the properties of their respective owners. More on Hyderabad, India. Jobs in Hyderabad.