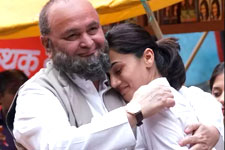 T J Reddy / fullhyd.com
EDITOR RATING
6.0
Performances
Script
Music/Soundtrack
Visuals
8.0
7.0
4.0
4.0
Suggestions
Can watch again
Yes
Good for kids
No
Good for dates
Yes
Wait to rent it
No
So, Taapsee Pannu went from being defended by Amitabh Bachchan in a courtroom to defending the latter's son from 102 Not Out in the same courtroom in a matter of two years. Bravo to her. But how did this happen? Who is to blame? The person who should be directly held accountable for it is Shahid Mohammed (Prateik Babbar). A terrorist responsible for the death of 16 people and injuring many others.

Shahid is the nephew of respected retired lawyer Murad Ali Mohammad (Rishi Kapoor) and the son of the latter's underachieving brother Bilal Mohammad (Manoj Pahwa). As news of Shahid's involvement in the attack breaks, the family, in their entirety, are subject to prosecution with charges of breeding terrorists in their home. Aarti Mohammad (Taapsee Pannu) is tasked with defending the honour of the family and to hold a mirror to society to show its prejudices about a certain religion based off the actions of a few fringe elements and carefully constructed narratives designed to blind people's rational thought.

Like Pink, Mulk's strengths lie in courtroom sequences where the dialogue employs the audience to both reinforce and challenge their beliefs. Even though writer/director Anubhav Sinha does not completely absolve either party of all sins, the method he uses to deliver his observations is the genuine highpoint of the movie. He makes cogent, fact-based arguments about the pros and cons of the Hindu-Muslim experience in India and the rift that exists between the two religions based on external misinformation and preconceived internal notions. Armchair liberals, rejoice! And armchair conservatives, there is something here for you too.

But arriving at the courthouse is akin to driving in Indian traffic. There are long meandering stretches of nothingness where the storyteller takes the scenic route of getting to point B from point A instead of employing a more entertaining approach. Unlike that of Pink, Mulk's structure does not put the audience in the judge's chair. Instead, it puts them on the defendant's side. We are made privy to the truth well in advance, and hence our minds and hearts are with a certain side, and that stunts the potency of the public prosecutor's arguments.

This is Ashutosh Rana's second performance as a pantomime villain in under three weeks, and the only things that differentiate his portrayal of Santosh Anand from his essaying of Ratan Singh is the lack of a moustache and the addition of a law degree. His character is one of a fringe element prosecuting another one of his kind who just so happens to come from a different religious background. Even though the movie never condones his arguments, the ham-fisted, arrogant, injustice-defending lawyer is a cliché unto itself, and the law of diminishing returns negates his effectiveness.

Manoj Pahwa, Rishi Kapoor, Taapsee Pannu and a spellbinding Rajat Kapoor's performance do him no favours either. Each of these other primary players has layers to them and is a mouthpiece for definitive talking points the writer/director wants to address. The personification of the horrors of Islamophobia and our criminal justice system (Pahwa), one's inability to display one's patriotism because it isn't someone else's idea of what a patriot looks like (Rishi Kapoor), an outsider's perspective on prejudice (Pannu), and a man who has internalised oppression to a such a degree that he hates his own kind and believes in someone else's narrative (Rajat Kapoor) are all in fine form. The personal interactions they have both inside and outside the hallowed halls of justice are both sombre and exhilarating.

However, the same cannot be said about how the film is shot and staged. Being a social drama, the movie inherits the problem of being dialogue-heavy. It moves from set-piece to set-piece with the grace of a stage play. The characters seemingly converge onto a specific background on cue and deliver their lines with gusto even though the movie lacks the kinetic energy a visual medium brings to the table. The film's visual presentation is painfully flat until its third act. The one-shots, the deep dives into the congested streets of Banaras and the ambient music whose purpose it is to acclimatise the audience to its surroundings pale in comparison to the acting performances and the ideas being presented.

It is reasons like those above and the fact that we as a country are far from using allegorical stories to talk about social issues that Mulk is kept from becoming as hard-hitting, compelling and thought-provoking as The Crucible. That being said, Mulk is a straight-faced, unpretentious film with its heart in the right place. We live in a world that values easily consumable narratives instead of meticulously nuanced arguments, and hence this film is a product of its time. The movie notes that the narratives of Good vs Evil, Us vs Them and India vs Pakistan is what the public is inundated with. It takes these archaic ideas into its stride and paints a clear picture of its idealistic world. PSAs are indeed entertaining when presented on the silver screen.
Share. Save. Connect.
Tweet
MULK SNAPSHOT 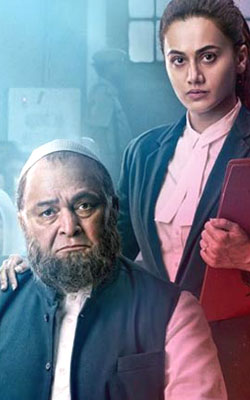 ADVERTISEMENT
This page was tagged for
Mulk hindi movie
Mulk reviews
release date
Rishi Kapoor, Prateik Babbar
theatres list
Follow @fullhyderabad
Follow fullhyd.com on
About Hyderabad
The Hyderabad Community
Improve fullhyd.com
More
Our Other Local Guides
Our other sites
© Copyright 1999-2009 LRR Technologies (Hyderabad), Pvt Ltd. All rights reserved. fullhyd, fullhyderabad, Welcome To The Neighbourhood are trademarks of LRR Technologies (Hyderabad) Pvt Ltd. The textual, graphic, audio and audiovisual material in this site is protected by copyright law. You may not copy, distribute, or use this material except as necessary for your personal, non-commercial use. Any trademarks are the properties of their respective owners. More on Hyderabad, India. Jobs in Hyderabad.